Elijah Holbrook is trying to make the most of his opportunities as a comedian because, up until recently, there weren’t many on his plate. About five years ago, Holbrook was living in the Fox Cities and struggling to find any consistent stage time within a 40-mile radius. However, a move to Milwaukee in 2016 opened things up considerably for the up-and-coming Milwaukee comic.

Currently, Holbrook co-hosts a weekly open mic at Bremen Cafe (every Monday) and spends the fourth Friday and Saturday of each month as the host of Milwaukee Comedy’s Blue Ribbon Comedy showcase. All of that is on top of frequent performances on showcases throughout the city (and beyond). This Thursday, the busy comedian will add one more thing to his itinerary when his new Broken Ribs Comedy show debuts at X-Ray Arcade. Before he kicks of the Cudahy comedy show, we spoke to Holbrook about his unlikely start in stand-up, his transition into the Milwaukee comedy scene, and what to expect at this brand new showcase.

Milwaukee Record: Where were you living when you started doing stand-up?

Elijah Holbrook: In an apartment building in Menasha, in a one-bedroom by myself. I’d just watch stand-up on Netflix. I started at the Comedy Quarter, which used to be in Neenah.

MR: Yeah, the one in the plaza with, like, a tiki bar next to it. I remember Carlos Mencia and Pauly Shore would do one-nighters there.

EH: Yeah, and Steve-O. It doesn’t exist anymore. It’s all been torn down. But somebody told me about the open mic there, so I went and tried it and was really bad, but I went back again. It closed like two months after I started. From there on, whatever was left of the comedy scene that didn’t give up when that closed down started open mics at bars. There was an open mic in Green Bay that I’d drive to every Sunday. I’d hit maybe three open mics a week, but it’d be spread between Oshkosh and Green Bay and Kaukauna—anywhere I could get up in front of people—and I just ground it out that way.

Eventually, I got to go to Skyline [Comedy Club] and did a guest spot there one night, and the next day, the guy running Skyline gave me a call to ask if I wanted to host the rest of the weekend. I got that, then I started hosting once a month and eventually started featuring there.

MR: That’s a very long-running and respected place. People like Shane Mauss have recorded there albums there and obviously T.J. Miller loves that place. And there are very funny people from that area Fox Cities and Green Bay area that make it here every now and then. I feel like there are more outlets in Northeast Wisconsin these days, but at that point, there didn’t seem to be that much happening. Were you happy that there weren’t really audiences or much pressure when you were starting out, or were you hungry for more opportunities and hitting your head on the ceiling creatively?


EH: I think I liked the challenge of trying to do comedy up there because in a lot of the places, you’d be in front of people who didn’t know [there was comedy happening]. They just came to the bar they go to after work, but someone set up a P.A. and the next thing they know, someone’s talking to them. Trying to get those people to pay attention was the whole goal. I feel it was a good way to get started. Having to fight for attention made me get better a lot faster, and once I got to work at Skyline, I feel like it was all paying off. If you’re just reciting jokes, people can sense that and tune out. If you can sound conversational and in the moment, people pay attention more.

MR: So what ultimately brought you here then?

EH: I felt like I needed to move to a bigger scene. A lot of the open mics in Appleton were ending, to the point where there was one or two a month. To get better, you have to get on stage. I didn’t have those opportunities, so I felt like it was time to move to a bigger scene with more open mics and more stage time. So I got a job and moved here.

MR: If I’m not wrong, that was right around the time a few local mainstays like Sammy Arechar, Liz Ziner, and Allison Dunne were moving to Chicago. So with that exodus, do you think you maybe inherited some opportunities or was it hard to get in the door in a new scene?

EH: I guess in my head, I thought it was going to be smoother than it was. In Appleton, I ran a show with Tyler Sitar and we had Milwaukee comics come up and do the show. So I knew some of the guys, and when I moved down here, I felt like I was already one of the comics in my head, when I actually had to prove myself. But there was the opportunity I got at Bremen Cafe when the hosts, Phil Davidson and Ryan Mason, were stepping down and handing it off to Gary Zajackowski. He knew me, so he asked me to co-host with him right after moving here. I’m so glad I moved here. It’s been really great here and I feel like I’ve gotten a lot better as a comic because I’m getting more stage time.

MR: Even though there’s no traditional club, Milwaukee Comedy and a handful of comedians are working hard to bring comedy to people in the city in lots of interesting and resourceful ways. Another awesome byproduct of there being no club is that there’s always room for more shows to be added in more places. If you don’t like where you’re at or how often you’re getting up, you can change that. You’re doing that with Broken Ribs Comedy. What led you to wanting to start this show?

EH: I’ve wanted to start a show since I’ve been here. And a cool thing about X-Ray Arcade is it’s an all-ages venue. Most shows are at bars and breweries, so people who aren’t quite 21 yet can get a chance to see a show. It started when I went to an Owen show at X-Ray and thought it might be a good place for a comedy show. At the same time as I was thinking about contacting them to put on a show, they were looking for someone to do comedy and had reached out to Jeff Spankowski and Tyler Menz, who referred them to me since they were both already busy booking shows elsewhere. It was like fate or something. And we’ve got a real good lineup for this one: Ton Johnson, Jeff Spankowski, Kaitlin McCarthy, and Carly Malison. 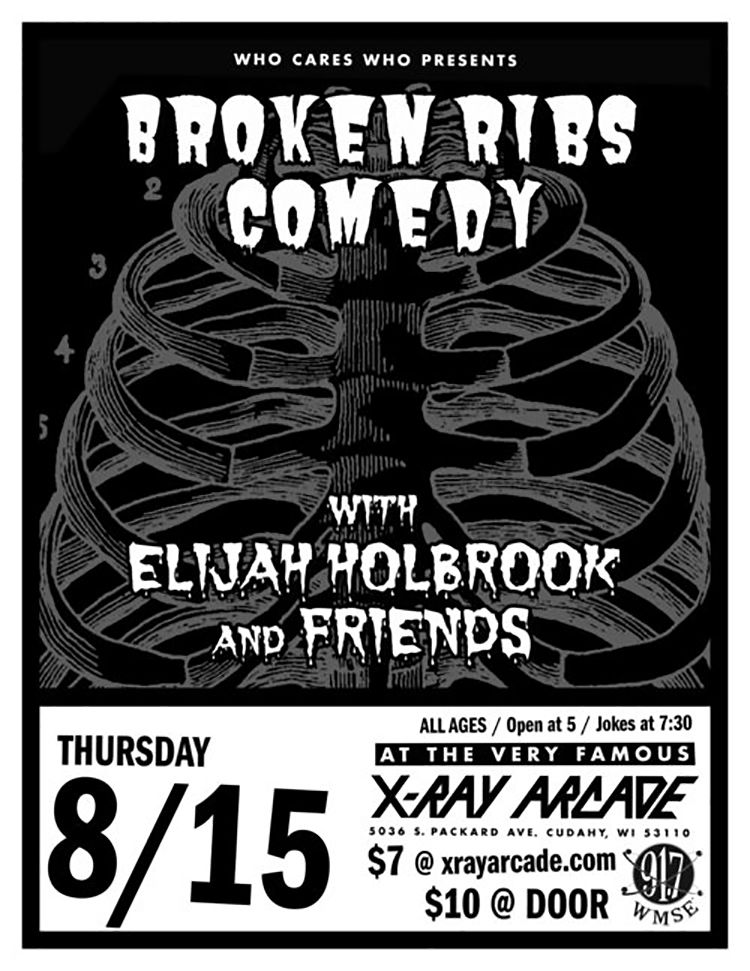