Milwaukee, we’re going to let you in on a little secret: Every day, once a day, give yourself a present. Don’t plan it, don’t wait for it. Just let it happen. It could be a new record at Rushmor. A catnap in Lake Park. Two cups of good, hot black coffee from Anodyne. Or, hear us out on this last one: a gallery show inspired by Twin Peaks, followed by an after-party featuring a Twin Peaks costume contest and a Twin Peaks-inspired band.

“It’s been a dream of mine to do a Twin Peaks gallery show,” Smith says. “I feel like after the first time I really dug into Twin Peaks I was immediately thinking about how I wanted to do a gallery show. There’s so much material to work with, and I feel like I’m just barely scratching the surface as far as nerdiness.”

So what can folks expect from the show? Perhaps channeling Twin Peaks co-creator David Lynch, Smith confesses that she’s not quite sure herself.

“When I do these gallery shows I just put out an open call and basically anyone who wants to be a part of it can be a part of it,” she says. “With artists being artists, I don’t have everything yet, so I’m not even sure as of right now what’s going to be in the show on Friday. But I know for a fact there’ll be paintings, and there’ll be a lot of photography and fashion design. I think it will be around 25 artists. I’ve changed out the entire shop, so there’ll also be a vintage Twin Peaks-inspired collection of clothing and home goods.” 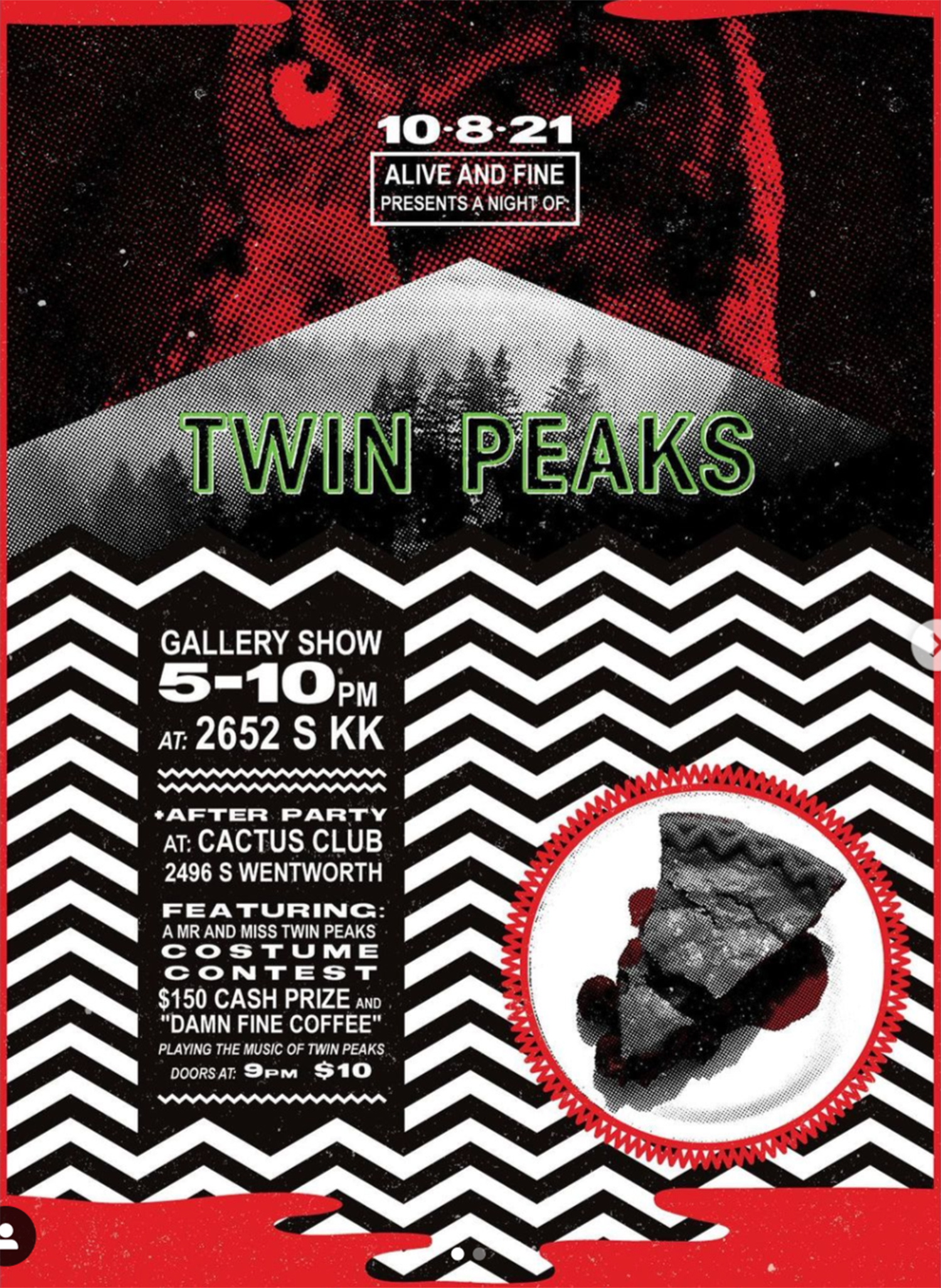 But that’s not all, Peaks freaks. There will also be an after-party at Cactus Club, complete with a “Miss/Mister Twin Peaks” costume contest. First place takes home $150, second place gets a $75 Cactus Club bar tab, and third place gets a $50 Alive And Fine gift certificate. On top of that, all winners get a dozen donuts. A speech on the pros and cons of the Stop Ghostwood campaign is optional.

And yes, there’s even more. The night will be scored by a one-night-only Milwaukee supergroup, Damn Fine Coffee. Band leader Nick Elert says he jumped at the chance to form the group.

“Performing a set of tunes from Twin Peaks has been a thing I’ve wanted to do for well over a decade,” Elert says. “Learning this music was a formative experience for me as a musician. So when Ashley put out the call for artists for a Twin Peaks-themed show, I thought it would be a good opportunity to check it off the list. I didn’t have the band together at the time I reached out, I just figured I knew enough people to make it happen.”

Doors to the after-party open at 9 p.m. Tickets are $10. Will someone dress as Windom Earle dressed as the Log Lady? Hopefully. Will Damn Fine Coffee play a bunch of Julee Cruise songs? Absolutely. Oh, and will a certain pilot episode be projected Thursday night at 8 p.m. at Bad Moon Saloon (4035 S. Clement Ave.) Maybe! Let’s rock.