2014
I‘ve been in my tree stand for an hour when a deer walks out in front of me. It appears from nowhere, absurd in its size, absurd in its very presence. It ambles its way to the dead center of my field of vision and stops. The sun is barely up and legal shooting hours have just begun. Snow covers the ground. It’s cold. I have no idea what I’m doing.

And yet here I am, 10 feet up a tree, staring at a deer—a doe—no more than 50 yards away. It’s just what my cousin and I had envisioned when we scouted this spot earlier in the fall. A dense forest of pines (the “thick shit,” in the parlance of my hunting group) is behind me and to my right; to my left, a strand of oaks (an “oak island”) gives way to a tailor-made deer lane that runs along the edge of a downed forest (the “logged-off shit”). Behind it, to the west, the towering Levis Mound of Clark County, Wisconsin; in front of it, to the east, me.

Huh, I think to myself. I guess this is what I’m here to do. I watch the deer for a few moments. It doesn’t move. I reach for my gun.

2018
There are countless people better qualified to talk about deer hunting—and the slow, inevitable death of deer hunting—than me. Yes, I grew up in semi-rural Wisconsin surrounded by parents, grandparents, aunts and uncles, cousins, and far-flung family members that all hunted. But when I turned 12 years old and it came time for me to assume my place as a hunter, I balked. I accompanied my father on exactly one hunting trip to my aunt and uncle’s cabin “up north.” I lasted approximately 20 minutes in a subzero snowstorm before I made my dad walk me back to our truck. He was devastated and more than a little annoyed. I swore off hunting, and the outdoors in general, and spent the next 23 years sitting inside and reading Dragonlance novels or whatever.

But somewhere along the way my attitudes changed. Not my attitudes toward the ethics of hunting—I’ve never been bothered by the “sport,” if you want to call it a sport—but my attitudes toward the basic act of hunting itself. Maybe it was because I’d spent years watching my family hang out without me, bonding over an annual ritual that I was forever depriving myself of. Maybe it was because that sometime around age 30, everything about hunting that had once bored me silly seemed absolutely brilliant. Wait, there was this thing I could do where I could stare at trees all day instead of at my phone or my laptop? Sign me up. In 2012, to the bemusement of family and friends alike, I decided to take another crack at it. 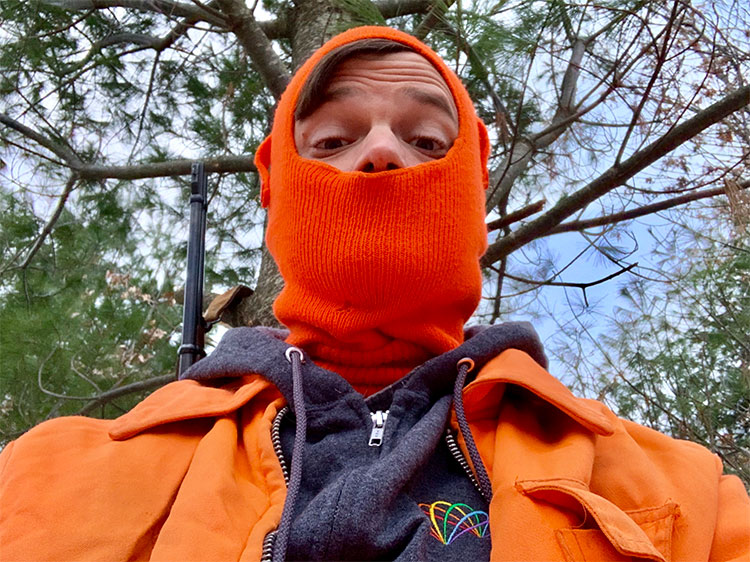 My late-in-life return to hunting, however, was and is an anomaly. A recent survey by the U.S. Fish and Wildlife Service shows that the number of American hunters 16 years and older is half of what it was 50 years ago—the result of an aging Boomer population and generations of younger folks with, let’s face it, better things to do. In Wisconsin, sales of hunting licenses have plummeted; in 2017, hunters registered 195,738 deer during the nine-day gun-deer hunt—the lowest number in 35 years. Those numbers are expected to fall further in the decades ahead.

That decline is evident as I enter the 2018 season. For one, my hunting party, once made up of me, my younger brothers, my cousin, and my aunt and uncle, has dwindled to just me and my youngest brother. Per usual, we’re staying at my aunt and uncle’s place in Clark County, tucked away in their finished garage, but they themselves are among the Boomers who have aged out of hunting. Turns out that stomping through the woods is kind of a chore with bad knees, bad hips. “Just the diehards this yeah, huh?” my uncle says when we arrive Friday morning. The idea that I could possibly be considered a “diehard” speaks volumes.

There’s another sign of decline: as my brother and I drive along the gravel road that borders the public land my family has hunted for decades, we notice an alarming absence of vehicles. Even as early as six years ago, the road was scattered with trucks and hunters. Never mind the stories we’ve heard about years when dozens upon dozens of vehicles lined the woods, when dozens upon dozens of hunters crawled through the woods. Now, we spy one truck parked alongside a snowmobile trail. The spot where we dip into the woods, just past an old logging road, is completely empty.

We grab our stands and head out. As we poke around in search of new spots, I see an almost comical amount of old trail markers attached to branches and trees—faded ribbons, reflective thumb tacks, clip-on flags. At first it’s funny, like a textbook over-marked in blaze orange highlighter. But the further we press on, the eerier it gets. A woods lousy with the ghosts of hunters past, a woods lousy with the ghosts of hunters who have long packed up and moved on. 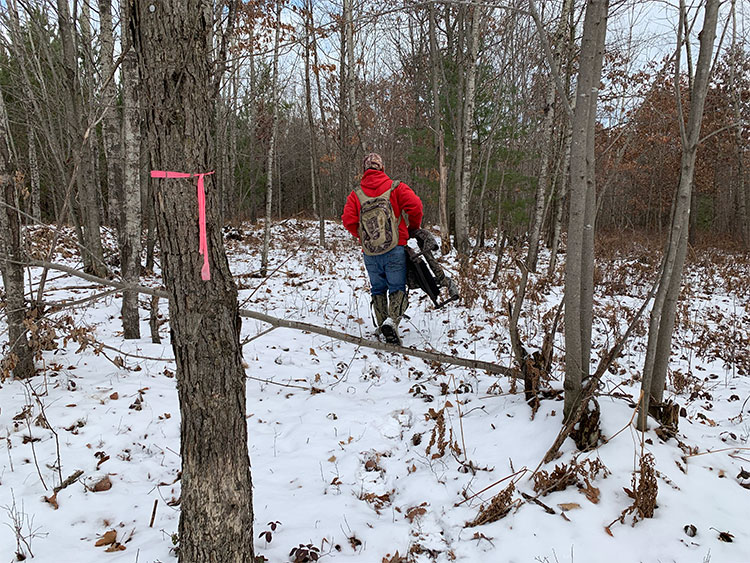 2014
I pull the trigger. My gun fires. The doe jumps. It runs for a few yards. It stumbles over a log. It falls over, dead. It’s all over in five seconds.

Oh god. There it is, dead, no more than 30 yards in front of me. What follows is a confusing, heady cocktail of emotions that blurs my vision and leaves my head swimming. Disbelief. Excitement. Confusion. Excitement again. Regret. Regret. So much regret. For the briefest moment, a harebrained scheme presents itself: When my brother inevitably calls wondering about the shot, I’ll tell him I missed. I’ll leave the deer where it is. Maybe I’ll cover it up with some branches. Maybe I’ll cover it up with some snow. I didn’t do this. It didn’t die. This didn’t happen.

But no, that’s ridiculous. And likely illegal. I did do this. I shot a deer. I did what I came here to do. Time to face the facts and deal with them. Time to get out of this tree and figure out my next steps.

But first, I call my wife. I tell her what I’ve done. She’s amazed. I’m still confused. My voice begins to crack. Then, suddenly, a buck appears. Just like the doe, it ambles its way to the dead center of my field of vision and stops. It doesn’t move.

2018
Day one and day two, Saturday and Sunday, are busts. Or rather, my brother and I leave without deer. But if the old saying “it’s the journey, not the destination” holds any truth, it’s doubly true for deer hunting.

There’s also the complete and utter lack of shooting. For two full days, I hear a dozen distant shots at most. Good god, there’s no one out here. 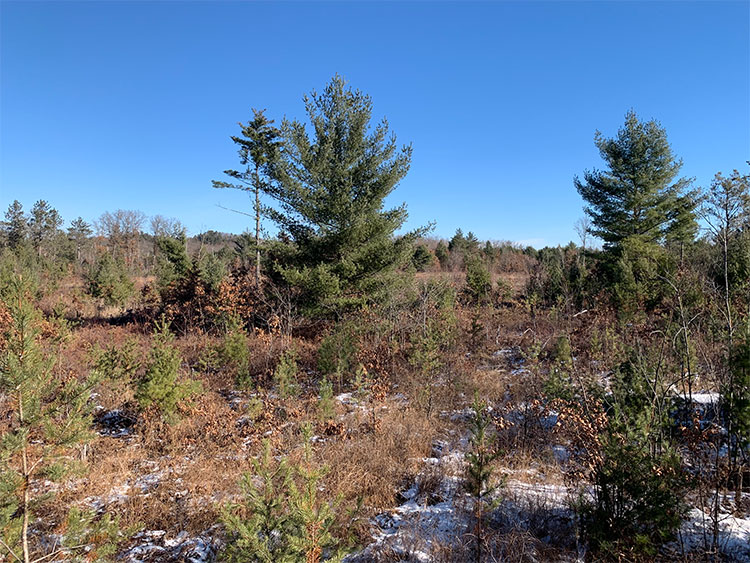 2014
I pull the trigger. My gun fires. The buck jumps. It runs for a few yards. It keeps running. It disappears into the thick shit to my right. It’s all over in five seconds.

We eventually do, tracking its blood through the snow. We field dress both deer and drag them out of the woods. Back at the cabin, everyone is amazed. Me, for the first time, getting a deer. Two deer. My family is beside themselves.

“The great hunter returns!” my uncle beams. I’m starting to come around to the idea.

I somehow find my father in the dark. “Dad, I want to go.” He doesn’t say anything. He leads me back to our truck, puts me inside, turns on the heater. He leaves. I spend the next eight hours switching between sleeping and crying. I’m never doing this again.

My brother and I are taking down his stand when I spot a small pool of blood beneath a tree. We haven’t shot at anything all weekend. We’ve hardly heard anyone shoot. The blood is a mystery, an omen. We find another pool a few yards away. After that, the trail goes cold. We search for an hour but can’t find a thing.

We pack up and get in the truck. Talk quickly turns to whether or not we’ll return next year. Why bother? No one comes up here anymore, so why should we? Maybe it’s best to find somewhere else to hunt. Maybe it’s best to just skip it altogether. Maybe I’ve already done what I came here to do. Maybe I’m finished, again. I’m starting to come around to the idea.

Before we leave the woods, however, my brother pulls over. He’s promised his daughter a Christmas tree for her bedroom. He uproots a small pine and ties it to the back of his truck. We leave. In the end, at least we’re bringing something home. 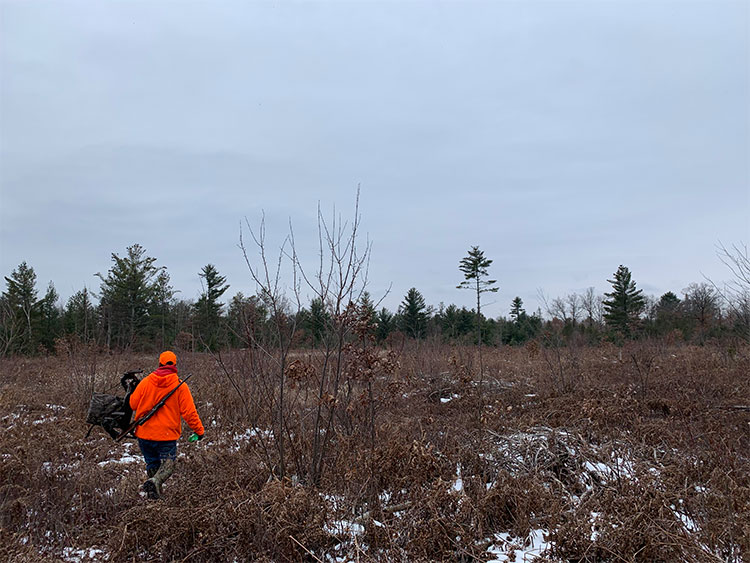