You’ve never heard Yum Yum Cult, but if you listen to Milwaukee-made music with any regularity, you’ve surely encountered some of its components. The new project features current and former members of Ugly Brothers, Antler House, Abby Jeanne, Temple, Moon Rats, Ladders, and many other Milwaukee music mainstays. With each of the three-piece’s parts busy in other endeavors, this new side project exists to scratch a creative itch not addressed in any of the members’ other endeavors.

Before Yum Yum Cult plays its debut show at Linneman’s Riverwest Inn on Saturday, Milwaukee Record asked singer-guitarist Palmer Shah about the band’s origin, how it differs from other acts they’re involved in, and what listeners can expect this weekend (and beyond).

Milwaukee Record: You’re all plenty busy with other projects, so why did you decide to start Yum Yum Cult? How did the project come about?

Palmer Shah:   I essentially started Yum Yum Cult because I was in dire need of a creative outlet that would allow me to open the valve and let out some steam. For me, that basically equates to either screaming or whispering sweet nothings into a microphone while accompanied by varying power chords. Myles [Coyne] essentially joined for the same reasons. In his case, he needed to vent by beating the shit out of a drum kit, and Ladders, his former means of doing so, had broken up. So he proposed we join forces.

MR: I know you all can and have alternated between guitar and bass in bands, and I know Myles played drums in Ladders. In a band where everyone can play everything, how did you decide?

PS: It was all pre-determined, really. At the time I initiated this project, I was looking for people to help me perform these songs I had been writing and get them out into the world, Myles was looking for a project where he could just show up and play drums, and Sean wanted to play bass and eat pizza. So it worked out for the most part, except for Sean. So far there hasn’t been any pizza involved whatsoever.

MR: You also have all fronted previous endeavors or at least shared vocal duties. Do you all sing in this band, or who’s fronting it? How was that determined?

PS: As I sort of explained earlier, Yum Yum Cult was sort of created under the guise that it would primarily be my project and my songs that we would be performing. Since Sean and Myles both have other outlets that showcase their own songwriting, they were more than okay with that. However, we have discussed the possibility that further down the road, once we have these songs under our belt and we’re more familiar with working together musically, that we could eventually start writing songs together as a band and have it be a more collaborative effort. For right now though, we pretty much have our formula. 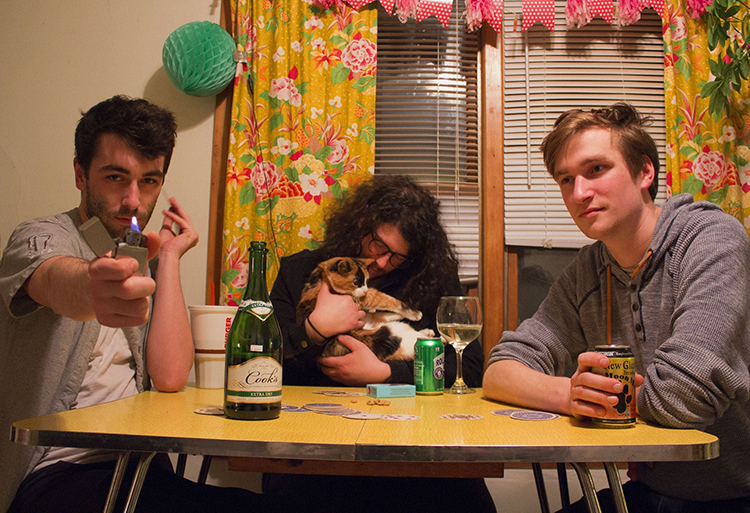 MR: It’s early in the band’s existence, but how do you feel Yum Yum Cult differs from previous and current bands you’re involved in? Does it sound like anything you’ve done before?

PS: It’s the first band I’ve fronted on my own in over half a decade, which is pretty big for me. So there’s that. It’s definitely a completely different feel from what Ugly Brothers was, at least genre-wise. It’s definitely less folk-y and the influences are a lot more surf, punk, soul, jazz, and rock and roll oriented. There may be a few similar elements with the songs I wrote while in Ugly Brothers and these new ones, but I think the similarities mostly extend to how I melodically and lyrically structure a song. That’s more of an identity thing and something that always stays with you, no matter how hard you try to reinvent yourself.

MR: Do you approach this project differently since it’s none of your primary projects? How?

PS: Since Playing with Abby Jeanne is still my priority, and something that takes up the majority of my time, I knew whatever project I started had to go at a slower pace that I could keep up with, and I think that’s something the other members felt as well. We all have our own shit going on, so our approach to this is to take our time with it and have fun doing it. And if people dig it at all, cool.

MR: Once the first performance is out of the way, what’s next? Are there plans to record, tour, play out a lot locally?

PS: We Have a couple shows lined up, most notably we’re playing Arte Para Todos on April 28 at LUX at 3:45. There’s definitely plans to record eventually, but any plan thus far is merely tentative, and we’re just kind of taking things as they come.