Though the regular seasons of the Milwaukee Bucks and Marquette Golden Eagles are both so painfully far away, Fiserv Forum is doing its part to hold over hoops enthusiasts with a few basketball-based events this summer. Before the Gus Macker 3 On 3 Tournament gives local teams of four an opportunity to take to the arena September 14-15, the Forum will be buzzing this Sunday afternoon when a group of former NBA staples, multi-time All-Stars, WNBA mainstays, Naismith Memorial Basketball Hall Of Fame inductees, and even a few ex-Bucks players take to the court as part of this weekend’s BIG3 triple-header.

Before the trio of BIG3 games tip off at 3 p.m., 4 p.m., and 5 p.m. respectively, we figured we’d get you up to speed on what you can expect to see when this young, and altogether awesome new league makes its way to Milwaukee on August 4.

So what is BIG3?
Founded in early 2017 by multi-hyphenate entertainer Ice Cube and his CubeVision business partner Jeff Kwatinetz, BIG3 is three-on-three basketball league that features teams with rosters and coaching staffs that are populated with hoops legends, as well as players with past (and potentially future) NBA connections. Following two successful seasons, the league added four new teams in 2019, expanding from eight teams to a cool dozen. In the process, the schedule expanded from a single four-game set at an arena to three-game match-ups in two cities each weekend. Another change this year is that BIG3 lowered its age minimum to 27 this year to invite in some younger talent. Since it’s a traveling league, there are no home teams and no regional aspect involved. Simply put, it’s just three-on-three ball with notable players you know and have spent years watching.

How does it work?
Okay, so if you need more specific details than “great players from NBA’s recent past playing fast-paced and undeniably fun ball on a half court,” here’s a little more info. BIG3 pretty much follows International Basketball Federation (or “FIBA”) rules, with just a few minor differences. Some of those include the scoring system. Unlike FIBA, the IS a three-point line in BIG3, and it’s the same distance as the NBA arc. Also like the NBA, anything made within that line is worth two points.

Yes, there are fouls and free throws. Oh, and there’s a trio of four-point circles if a player wants to chuck up a long-distance shot. Sadly, those circles don’t get much use. The first team to 50 points—and leading by at least two—wins. Between the half-court format and the clear 50-point goal, BIG3 is fast, competitive, and fun as all hell. Even if players don’t attempt four-pointers very often.

Adding to BIG3’s star power is an exceptionally impressive crop of coaches. Teams are led by the likes of Julius Erving (for whom the championship trophy is named), George Gervin, Nate “Tiny” Archibald, Rick Barry, Rick Mahorn, Charles Oakley, and Reggie Theus. In a refreshing and progressive turn, the league is also giving WNBA great Lisa Leslie and “Lady Magic” herself (Nancy Lieberman) well-deserved head coaching opportunities. In fact, the Lieberman-led Power are the reigning BIG3 champs. Additionally, the league also boasts coaches used to be on the Bucks, including Gary Payton, Kenyon Martin, and Tri-State interim coach Steve Mix.

Who’s playing in Milwaukee?
The three-game basketball buffet that’s coming to the Fiserv Forum on August 4 includes some exciting pairings, a bevy of great players, and a ton of homecomings—some warm, others not so much—from guys with connections to Milwaukee.

The 3 p.m. game pits the Aliens (2-4) against 3’s Company (3-3). Both teams are currently in the middle of the pack, if not lower than that, but Archibald’s Aliens feature Oden, Brandon Rush, and Shannon Brown (NBA vet, Sterling’s big brother, and one-time Wisconsin Herd player). As far as 3’s Company goes, you can expect to see longtime NBA veterans like Dahntay Jones, Jason Maxiell, and a return to Milwaukee by Drew Gooden.

At 4 p.m., 3 Headed Monsters (2-3) will take on Triplets (5-1). Triplets currently hold the distinction of having the BIG3’s best record behind the on-court prowess of Joe Johnson and Al Jefferson, as well as Leslie’s leadership. Despite their losing record, 3 Headed Monsters have some especially exciting personnel. The seemingly ageless Abdul-Rauf and two-time NBA champ Mario Chalmers highlight the Payton-led squad. In addition to “The Glove” returning to the city where he spent a short and tumultuous stint, Larry Sanders (whom the Bucks are still paying) will come back to downtown Milwaukee. Also, we’d be remiss if we didn’t mention that Sanders proposed to his girlfriend in the middle of a BIG3 game earlier this season. Who will be the next player to pop the question on the court? Will it be Glen “Big Baby” Davis? Only time will tell!

LARRY SANDERS HAS PROPOSED MID-GAME THIS IS NOT A DRILL AND ITS ONLY THE FIRST GAME OF THE YEAR LMAOOOOOO pic.twitter.com/LhgX1zsGKt

Finally, the 5 p.m. find Trilogy (3-2) and Ball Hogs (0-6) squaring off. Trilogy is coached by Kenyon Martin, who had a couple 10-day stints with Milwaukee before calling it a career, and is led on the hardwood by Bucks fan favorite/historically great sharpshooter Jason Terry. That team try to prevent the Ball Hogs from securing their first win of the season. With Barry at the helm and the likes of Josh Childress and Brian Scalabrine on the roster, the losing streak is bound to end soon.

Fortunately, Milwaukee is spared from having to see Stephen Jackson and Josh Smith, both of whom have been critical of the city. Beyond potential Payton- and Sanders-related uneasiness, Sunday’s schedule has the makings of a positive and entertaining experience that ballers of all ages can enjoy.

How can I see this?
Tickets are on sale now. If you can’t attend, you can watch it live on CBS starting at 3 p.m. on Sunday. BIG3 fever! Catch it, Milwaukee. 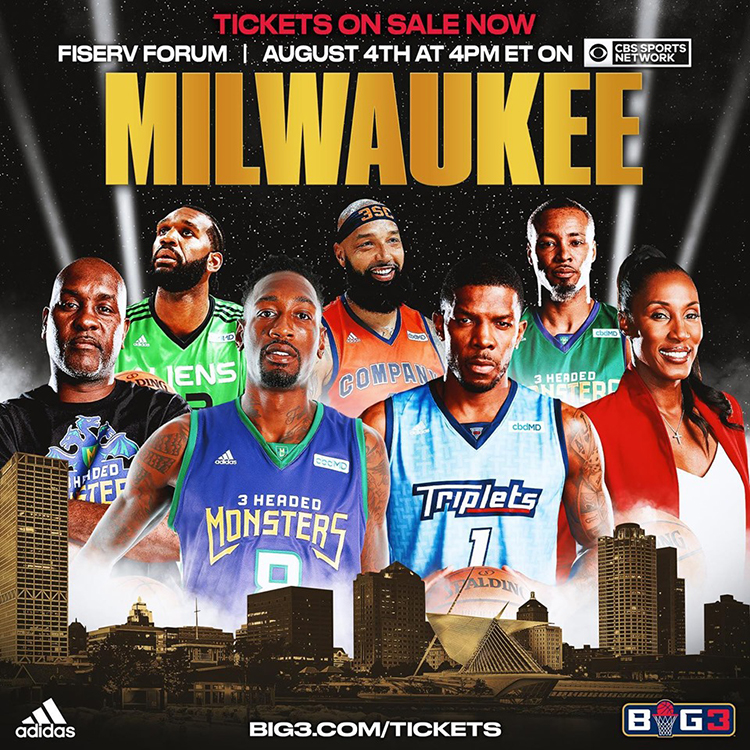