Back in 2020, Milwaukee musician Jordan Davis added “Milwaukee game developer” to his resume when he released Space Raft: The Game. The NES-style video game was inspired by Davis’s band, Space Raft, and was an absolute blast to play. Since then, Davis has continued tinkering with his 8-bit obsession, and on Thursday, July 28 at The Cooperage, that obsession will spill over into the real world with Davis’s Milwaukee Minute Arcade.

The free, all-ages pop-up will give interested folks a chance to play new and in-progress local indie video games (both modern and retro), check out various VR games and board games, get a bite to eat at a few food trucks, and more. Above all, it will provide a venue for seasoned game developers to hang out and swap ideas, and for newbies to get a taste of the action and learn the ropes. Ahead of the big event, Milwaukee Record talked to Davis via email about his latest projects, seeing Space Raft become a stand-up arcade game, and what local game development can learn from the local punk rock scene.

Milwaukee Record: What have you been up to since your Space Raft game?

Jordan Davis: I’ve been so busy! So much has happened since I took this unexpectedly fulfilling side quest into game development. I am still fully committed to working with the NES, but I found that focusing on collaborations with others has been the most fulfilling for me. I get to lean into the music, art, and design skills I have acquired, while skipping the frustrating parts like 8-bit math and assembly language programming.

The thing I have been working hardest on recently is tentatively called Project Sword. A game I have been collaborating on with a developer in Illinois called Bite the Chili. The game is heavily influenced by Sunsoft’s 1989 Batman wall jumping mechanic, combined with the twitch reflex pacing of Ninja Gaiden, wrapped in a mishmash of fantasy influences ranging from the Princess Bride to Harryhausen’s 7th Voyage Of Sinbad. I am doing all the art and music and we’re sharing design duties. It’s been a great next step in my own understanding of NES development, as we’re using a lot of advanced techniques like four-way scrolling, bankswitching sprites, and DPCM samples used for percussion. My friend and local comic illustrator Steve D’eau is providing illustrated portraits for the characters in the game. It’s looking so wonderful thus far. We had a fantastic response showing it at the Midwest Gaming Convention this year, I really think players are going to connect with it. I couldn’t be any more excited to get it done and out there into the world for people to enjoy!

I am working on finalizing Space Raft Arcade, a quasi-sequel to the Space Raft game developed exclusively for X-Ray Arcade in Cudahy. A remix of the original game idea with arcade-specific game mechanics in mind. It’s a continuation of the original story and features an all new cast of Milwaukee musicians and locations like the Oriental Theatre and the Milwaukee Art Museum. The cabinet is currently out on test at X-Ray, and we’re hoping to announce some sort of formal launch party for it at some point. That has been a total dream; working with X-Ray to bring that project to life has been nothing short of a thrill. The arcade was my first love, old arcade cabinets like Centipede and Galaga made such an impression on me. Seeing the marquee lights turn on for Space Raft Arcade brought tears to my eyes. 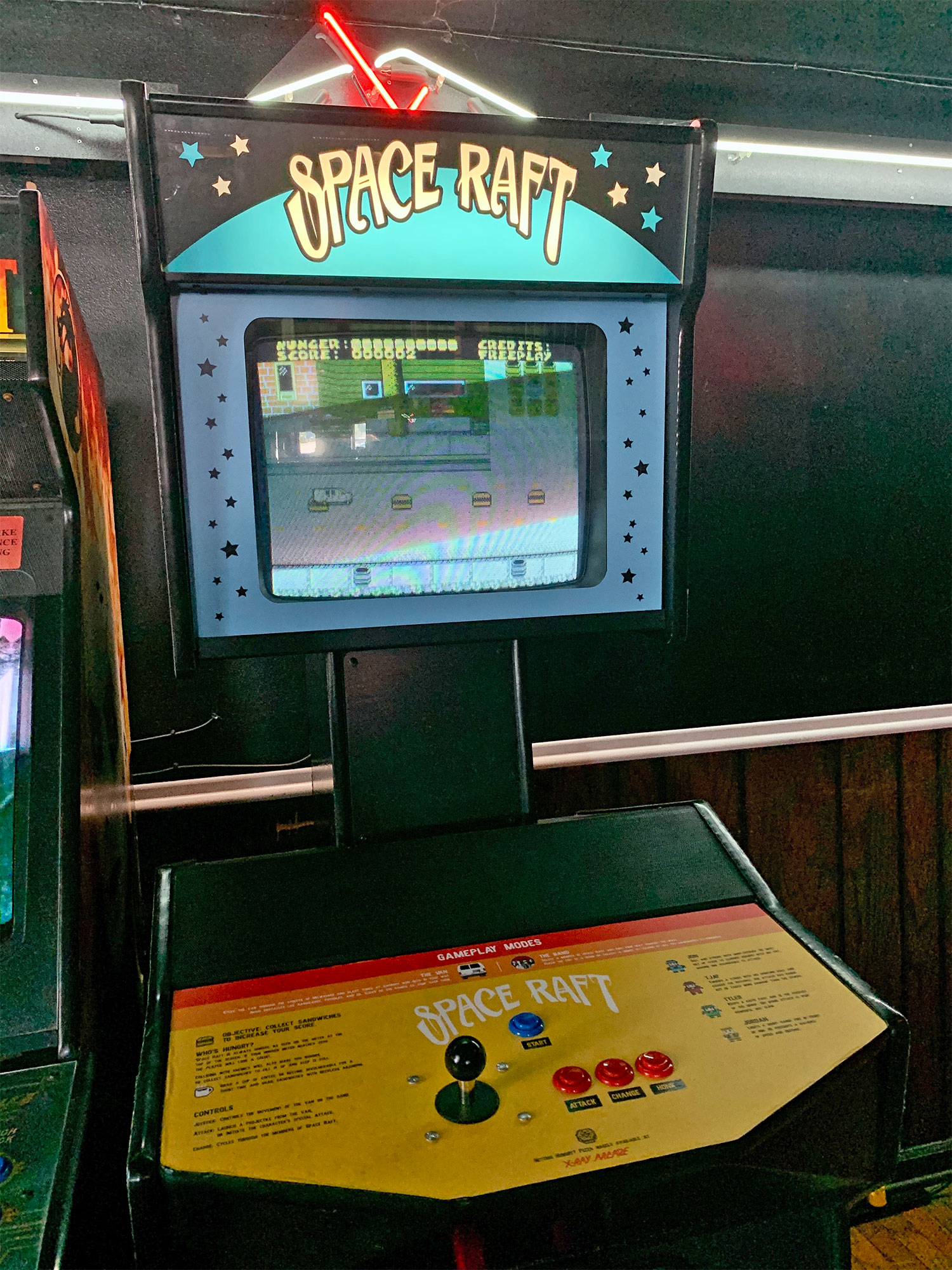 Additionally, I am composing soundtracks for other NES developers, including local developer John Vanderhoef’s Orebody: Binder’s Tale, which has a cartridge pre-sale campaign happening now! As well, I am doing music for a super secret fan game project that I think will be exciting. Music was my entry point into game design and sound design is still the thing I get the most joy from.

Finally, I was able to announce recently that Space Raft is coming to the Nintendo Switch through a physical release on Premium Edition games, a compilation of indie developers making games for the NES. Pre-orders for that should start around the end of summer, and be followed by eShop release through publisher Namitentou.

MR: What’s the local game development community like? Is it a vibrant thing that’s largely under the radar, or are you looking to grow it with your Milwaukee Minute Arcade show?

JD: It’s an interesting space! There is so much raw talent in Milwaukee, but not many avenues for promotion of our games. Game developers don’t have concerts to help get the word out about work being done. It’s hard to get the face-to-face interaction with players that is so crucial to our growth as devs. Independent game development is often a solitary pursuit. To bridge this, Joe Bunda of the Miltown Game Developers has been organizing meetups on Discord to get us sharing our projects and talking through design problems. I’ve attended a couple of the meet ups and it’s been really cool seeing what other people have been doing. If anything, it’s empowering to know that you’re not alone in your creative pursuits.

Milwaukee isn’t known for its focus on technology, but it has a great history of entertaining people. Making interactive media is about communication and organization, and that particular gumption required to see an errant thought through from vision into reality. Those are the raw materials I see in abundance in the creative landscape of Milwaukee. The punk rock and DIY communities I’ve been involved with here have existed on grit and pure determination; supporting each other is mutually beneficial and is considered second nature. I am hoping we can bring this kind of community-building attitude to game dev and make Milwaukee an exciting topic of discussion for gamers.

The games industry is really massive, and it has eclipsed all other forms of entertainment media combined. Development of the AAA industry tends to exist only on the coasts. Independent game development can happen anywhere, which is great, but it’s really hard to find an audience in what seems like a flood of indie games. We’re hoping to join forces to help promote each other, and hopefully help develop a deeper respect for Milwaukee as a creative center in the process.

MR: What can someone who’s not knowledgeable or even terribly interested in game development expect from this show?

JD: Play some games! Have fun! The main goal here is to combine efforts and reach new audiences. We’re hoping the same interest that drives engagement with the Milwaukee music scene will correlate to Milwaukee gamers’ interest in experiencing games made here in Milwaukee. We want people to play our games and the games being made by our neighbors. We want Milwaukeens to join the conversation about games. We’re dreaming up channels to promote our games locally, and hoping we can inspire others to join us in creating games here and further strengthen our community.

Most importantly, this is a no-pressure event. Come and see what we’re doing is all we’re asking. If you’re interested in knowing how something is made, we’d love to talk to you. If you’re curious in making something yourself, we’d love to help point you in the right direction. If you just want to chill and talk about games? We love games, that is literally all we talk about. 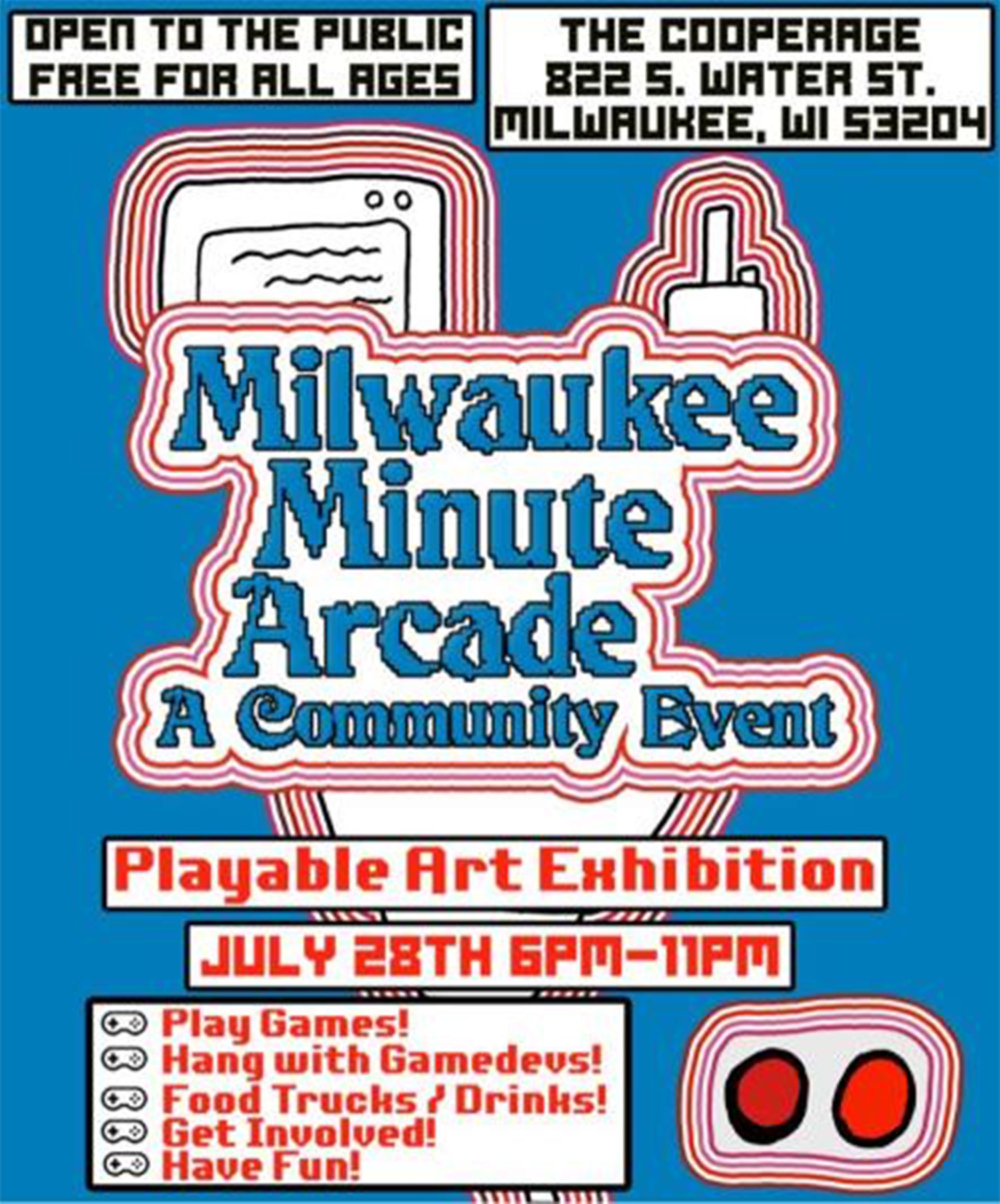 • Now Milwaukee music is playing with power in the delightfully retro ‘Space Raft: The Game’