It’s been said that live music venues were the first to close in the early days of the COVID-19 crisis, and that they’ll be the last to reopen. The economic danger these venues face is very real, and their futures are very uncertain. In Milwaukee and across the country, venues both big and small are pressuring Congress for federal assistance. (You can support the effort HERE.) Still, stages remain dark.

Now, however, the Pabst Theater Group (Pabst Theater, Riverside Theater, Turner Hall Ballroom, The Back Room @ Colectivo) is entering the world of virtual shows with #ReviveLiveMKE, a livestream series that gives fans a direct way to support both PTG venues and individual artists. The series kicks off Thursday, May 14, at 6 p.m. CST, with a performance from indie rock artist Japanese Breakfast. Tickets for the virtual show are $20, and are ON SALE NOW. All proceeds will go to the Pabst Theater Group and the touring members and crew of Japanese Breakfast.

Ahead of the show, we spoke to two people behind #ReviveLiveMKE: Matt Beringer of PTG, and Ryan Matteson of music management firm Ten Atoms. (Matteson, who manages Japanese Breakfast and many others, is a former Milwaukeean and former employee of PTG venues.) The conversation has been edited for clarity and length.

Milwaukee Record: The last time we saw each other, Matt, was at the They Might Be Giants show at Pabst Theater in early March. If it’s even possible, could you give us some sense of how things have changed for you and the Pabst Theater Group since then?

Matt Beringer: Dramatically. That show took place on a Thursday night, and my family and I took a little out-of-town trip that weekend. Over the weekend I think I heard that South By Southwest was canceled. On Monday I started to get some rumblings that the NBA season may be postponed, or that they were talking about shifting to closed-door games. And then on Wednesday I got a call that said, “Wait for an announcement, it’s coming down.” We had a sold-out show with Chelsea Cutler scheduled at Turner Hall. Then the whole thing went down with [NBA player] Rudy Gobert, and then they abruptly canceled the NBA season, and then Chelsea’s team was asking us, “Well, what if we have to cancel tonight’s show?” We had the weekend coming up with ten shows across four venues. By Thursday evening we had canceled all but three shows, and by Friday morning it was abundantly clear that we were going to have to force cancellations for everything for the rest of the month.

If you go back to those weeks in March…it has just exceeded anything anybody imagined. That doesn’t take away from the fact that we have a much bigger crisis that we’re dealing with, from the standpoint of this being life or death. But in our little microcosm of live events, it’s definitely not overstating it to say that this is the fight of a lifetime. We understand that we’re not the grocery store, that we’re not the pharmacy. But the fact is that live entertainment is a quality of life thing for many people, and to have that taken away is pretty devastating. Not just in terms of the spider web of businesses that’s affected by a healthy entertainment scene, but just in terms of people’s quality of life.

MR: Moving to something hopefully more positive, tell us about #ReviveLiveMKE. Where did the idea come from?

MB: Right now we’re just doing everything and anything we can to get some kind of momentum. I don’t want to pretend that there’s any kind of a replacement for opening up the Riverside Theater or opening up the Pabst Theater. There isn’t. But we’ve been trying to play with any kind of idea that will keep people engaged, and also draw some attention to our cause. I called Ryan because we were trying to toss around any ideas that we could, whether they were drive-in shows or streaming. And I think the idea [for #ReviveLiveMKE] is, hey, why don’t we use one of the last tools that venues still have in their tool kits, which is an enormous community of music fans and an enormous community of entertainment fans. This serves as a good way to get these concerts out to people, even if we’re not talking about a physical location.

Ryan Matteson: From our end, it’s really no surprise that when an artist is looking to do something, you turn to the venues that take the best care of them on the road. That’s the Pabst Theater Group standard. Where is home when you’re on the road? Who treats you the best? It’s these guys. I also knew that I could trust them, because a lot of what’s in my brain I’ve exported from working with Matt and Gary [Witt]. I’m extremely fortunate to have had those guys as mentors. I can trust them in opening the door and me saying look, this is an experiment. I don’t know if it’s gonna work. I don’t know if it’s going to be successful, but at the end of the day we’re still friends and we’re still trying to figure it out, and I’d rather do this with you guys and hopefully put some money in the artist’s pocket and put some money in the venue’s pocket.

Michelle [Zauner, of Japanese Breakfast] was going to do this livestream on the 14th. Part of the idea that came out of Matt and I talking was, well, what if we just opened this up and allowed you guys to participate in it. Some of Michelle’s fans had already bought tickets, but we were never going to have the reach in Milwaukee that Matt and his team have. It was a perfect storm of being able to bring Michelle’s audience to Milwaukee, where she sold out a show back in 2018 and was planning on being back later this year. So we’re working together on something that helps Michelle, raises some revenue for her band and crew that’s out of work right now, but also opens this up as an opportunity to give back to the promoters that have been there for Michelle and her band, and will continue to be there going forward.

MR: Can you tell us what we can expect from this particular show and from shows in the future?

RM: With Michelle, she’s working on a new record and I think you’ll hear new songs. She’s been working on a Randy Newman cover that she’s kind of teased out on social media. There’s going to be a bunch of other covers that I know she’s been working hard on. And of course old favorites will be in there, too. The goal of this is to make it an experience that fans are going to love and enjoy and feel like that, just like a regular show, if they’re going to pay their hard earned money, that it’s something fun and enjoyable. I think Michelle is one of the hardest working people I know, and I have no doubt that everybody, including myself, is going to be excited to see her sing live again.

Practicing this Randy Newman cover for my livestream on May 14th. Proceeds benefit band & crew. 🖤 Get discounted tickets by texting JBREKKIE to 31996. https://t.co/W0gDus5wOZ pic.twitter.com/sxQ64ZnuIf

MB: [#ReviveLiveMKE] is kind of feeding into a larger effort that we’re doing on our side with the Pabst Theater Group. We recognize that these are difficult times, both from the standpoint of public health and the standpoint of the terrible economic devastation. But we also recognize that people are trying to secure things that they enjoyed prior to the COVID-19 crisis. We’re really hoping that with #ReviveLiveMKE we can communicate what our needs are, and also make sure people have somewhere to come back to once concerts safely resume. 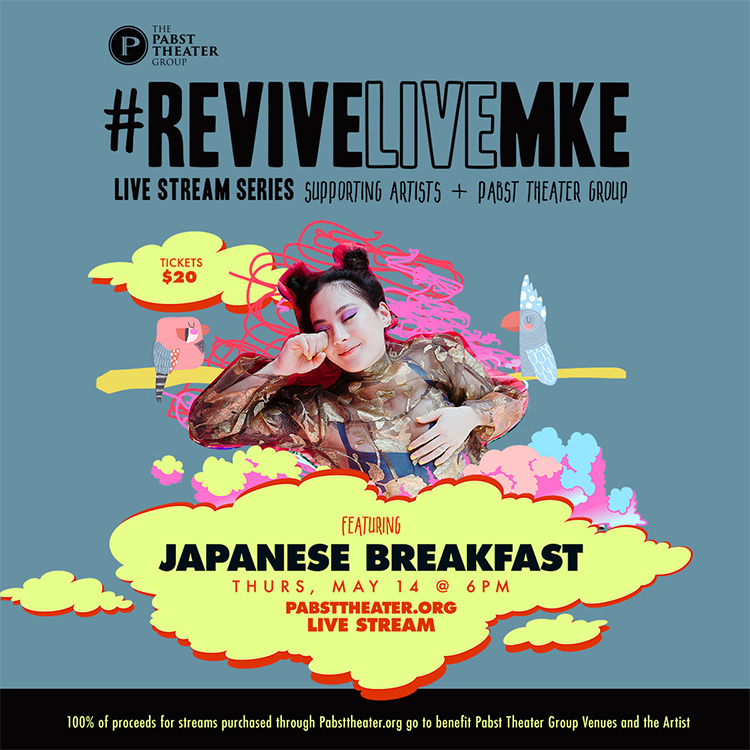