Thursday night, They Might Be Giants played a sold-out show at Milwaukee’s Pabst Theater. It was a lot of fun! Here are eight questions (and answers) for said show:

Q: This was a 30th anniversary show for 1990’s Flood, right? Did They Might Be Giants just play that record front to back and call it a night?

A: Yes, this was a 30th anniversary (!) show for Flood, but no, they did not simply play that record front to back and call it a night. The two-and-a-half-hour “evening with” concert was split into two sets: one featuring the vast majority of Flood, and the other filled with newer tracks and various odds and ends. Johns Linnell and Flansburgh played the Flood material out of order (they opened with the wonderful “Dead”), and, along with their trusty band, did justice to both well-worn classics (“Particle Man,” “Birdhouse In Your Soul”) and oddball deep cuts (“Hearing Aid,” “Hot Cha”). They played “Twisting.” They played “Your Racist Friend.” They played “Sapphire Bullets Of Pure Love” both frontwards and backwards. It was great.

Q: So what about the second set? Did they do that “Quiet Storm” thing, like they did the last time they were here?

A: Ah yes, the beloved “Quiet Storm” section of a TMBG show, where the lights dim, the Johns huddle up next to drummer Marty Beller, and we’re treated to hushed songs while a lightning storm screensaver is projected in the background. The should-be-a-classic “2082” opened this section, followed by the bonkers “Music Jail, Pt. 1 & 2.” (Flansburgh: “I’m trying to think what album this is on. Dammit!”) The storm didn’t last long: following an “Underwater Woman” video interlude (coffee break?), TMBG played their terrific new single, “The Communists Have The Music.” More deep-ish cuts followed, like “Pet Name,” “Turn Around,” and the hilarious “Let Me Tell You About My Operation.” It was great. (Flansburgh described many of these songs as coming from the “difficult middle-third years of They Might Be Giants.”)

Q: Wait a minute: a new song? They Might Be Giants are still putting out new songs? I kind of stopped keeping track after John Henry. I love Flood, though!

A: They are! They’ve put out a half-dozen records since 2010, and they’re stuffed with gems: “Judy Is Your Viet Nam,” “Erase,” “Answer,” and the sublime “I Left My Body.” There’s a ton of new and newer material, and while it’s great to hear, say, “The Guitar (The Lion Sleeps Tonight)” for the umpteenth time, it’s a shame that so many great songs get lost in the shuffle. Though that’s probably to be expected when a band has been around for roughly 35 years. And they’re playing a show largely built around a single album. But yeah, Flood is great!

Q: Was there a shout-out to their infamous 1992 Milwaukee/Modjeska show, where the stage collapsed under the weight of dozens of over-eager fans?

A: It wouldn’t be a Milwaukee They Might Be Giants show without it! As always, the stage banter between the two Johns was adorably dorky and dry. Linnell spent an inordinate amount of time talking about his new keyboard stand (making its premiere at the Milwaukee show!), Flansburgh pondered the ratio of beards to glasses in the crowd, and both Johns took turns conducting the band (and the audience) during a truly bizarre sonic freakout that featured a sample of the Eagles’ “Take It To The Limit.” Was there random chatter about the coronavirus? Yes there was. “We’re going to take a 15-minute break,” Flansburgh announced before the set break. “We’ll be back in 45 minutes.”

Q: Did they close with “Doctor Worm”? No, wait, they probably closed with that Cub cover, “New York City.” Also, could you post that clip of Michael McKean speaking the lyrics to “The End Of The Tour”?

Q: How long did this reviewer make it before he started crying?

Q: Was Craig Schanning, a.k.a. the Milwaukee guy who competed in the “world’s largest Pac-Man tournament” at County Stadium in 1982, down in the pit?

A: Yes he was! Hope you enjoyed the show, Craig!

Q: What was the setlist?

A: Here you go! We’ll see you at the end of the tour! (Or, as Flansburgh put it, probably in a year and a half.)

Istanbul (Not Constantinople)
Theme From Flood

The End Of The Tour
New York City 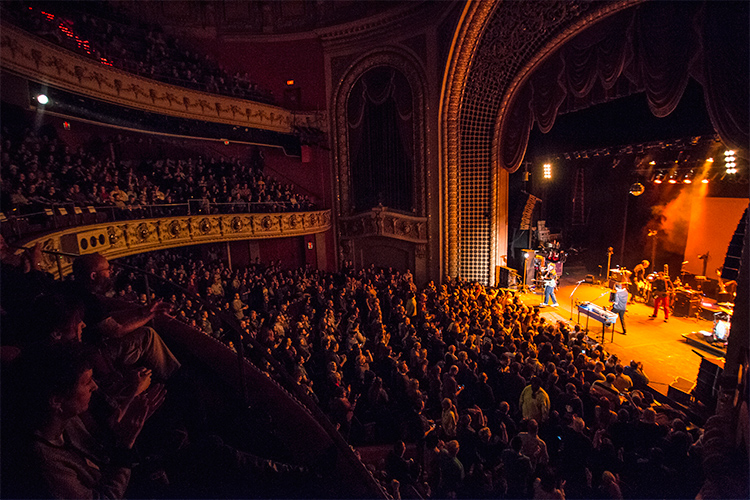