We miss baseball. We miss Bob Uecker. We miss baseball being called by Bob Uecker. If we can’t have those things, we guess we’ll settle for this: A MR. BELVEDERE ZOOM REUNION ON FRIDAY, MAY 29!!!!! WITH BOB UECKER!!!!! WHAT??!!?? OH GOD IS THIS REALLY HAPPENING???!!!

This ONCE-IN-A-LIFETIME EVENT is scheduled for Friday, May 29, at 7 p.m. CST. Fans will need to register in advance HERE. After registering, fans will receive info on how to join the video conference. IT’S JUST A DREAM, RIGHT? A BEAUTIFUL, BEAUTIFUL DREAM. JUST LOOK AT THIS PICTURE: 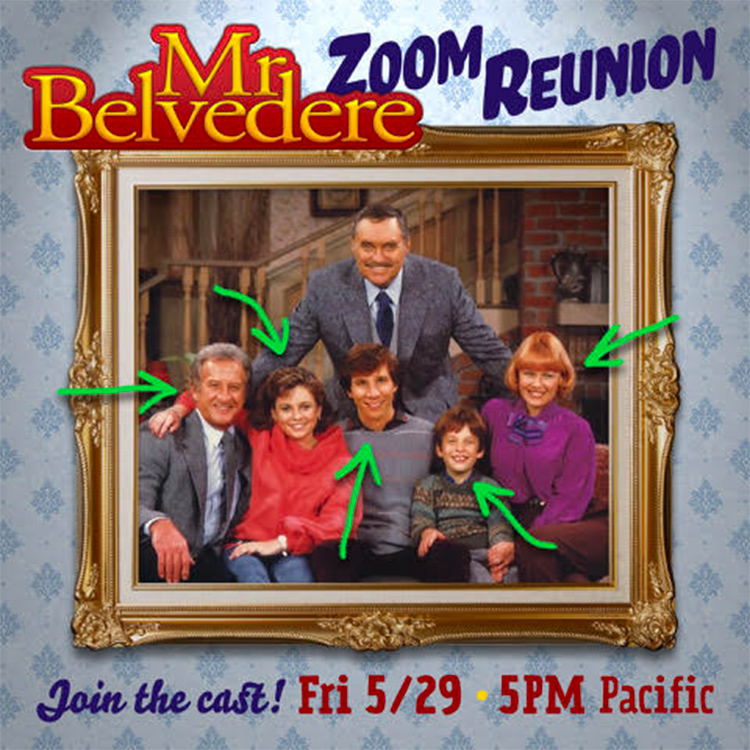 Christopher Hewett, who played the titular Mr. Belvedere, died in 2001.

We can’t wait. Until then, here’s a Belvedere-related piece we wrote last year…

All I really need to know I learned from Mr. Belvedere

Which is a shame, because, like so many sitcoms of the era, Mr. Belvedere offers plenty of life lessons that can be imparted in a tidy 22 minutes. The first season alone—which ran for seven episodes in 1985—is chock full of remarkably timely stories that deal with gender stereotypes, mid-life crises, animal rights, homelessness, and the withering put-downs of a wildly overqualified English butler who once worked for Winston Churchill. “They’re damn lucky to have me,” Lynn Belvedere (Christopher Hewett) writes in his journal soon after taking a job with the rowdy Owens clan. And we’re damn lucky to have his nuggets of ’80s sitcom wisdom.

Modern society continues to erase the line between things that are “for boys” and “for girls.” In Mr. Belvedere‘s third episode, “Gotta Dance,” that line is addressed when youngest son Wesley (Brice Beckham) takes an interest in ballet—much to the initial horror of his recovering jock father. “So all this time when I thought he was out playing football, he’s been doing twirls down at the tutu farm?” George bellows. But when the family attends Wesley’s recital and a crummy dad starts making crummy comments (“Check out Prince Valiant! There’s a guy who rides side saddle!”), George explodes. “His name is Wesley! It’s not Prince Valiant! It’s not Fruit Loop! It’s not Tinker Bell! And he’s doing a hell of a job up there and I’m proud of him!” Gender norms are forever shattered (in Beaver Falls, Pennsylvania, at least), and Mr. Belvedere later reveals he harbors an “animal-like passion for lawn bowling.” Cue the laugh track.

Fragile masculinity is an ugly problem in the 21st century, especially when lady Ghostbusters are involved. In Mr. Belvedere‘s fourth episode, “Gorgeous George,” George feels humiliated after Belvedere beats someone up at a professional wrestling match. (It’s a long story.) How does George handle this challenge to his delicate manhood? He buys a motorcycle, tries to pick a fight at a seedy biker bar straight out of Pee-wee’s Big Adventure, and mopes. “I’m going to be 50 this year. Fifty! The big 5-0. I don’t know what’s happening,” he confesses to Belvedere. Sure, George eventually recovers when his wife Marsha (Ilene Graff) calls him “the boss” (remember, it’s the ’80s), but his midlife man-crisis is made to look ridiculous. Also, Mr. Belvedere gets his shins kick by a little person, and daughter Heather (Tracy Wells) wants a scooter because Adam Ant has one (remember, it’s the ’80s).

Is there anything hotter that a little eco terrorism? No there is not. In Mr. Belvedere‘s fifth episode, “What I Did For Love,” doofy eldest son Kevin (Rob Stone) goes to great lengths to impress his eco-obsessed study partner Jennifer Simpson. “I won’t sleep with anyone unless I respect their political convictions,” Jennifer says. Fast forward to Kevin infiltrating a fur shop at the mall, spray painting a $2,300 Norwegian mink coat (“This is for all the minks in Norway and all over the world!”), and getting arrested and locked up with a creepy Charles Fleischer. Does Kevin get bailed out by mom? Yes. Does Mr. Belvedere reveal that he once tried to impress a girl by intercepting a Soviet whaling vessel off the coast of Gibraltar? Of course. Does Kevin tell Jennifer off in the end? Yep. Also, there’s a running gag about how no one calls in to George’s sports talk radio show, and how his family thinks he’s a big schmuck.

Finally, Mr. Belvedere‘s seventh episode, “Sweet Charity,” is about the family taking in a “bag lady.” It’s kind of like that time Zack Morris met a homeless girl in the mall, except not.

Of course, the greatest lesson to be gleaned from Mr. Belvedere is what it means to “Belvedere yourself.” You’ll have to look that one up on your own.