For nearly two decades, the East Side’s annual Summer Soulstice Music Festival has marked the arrival of summer with music, food, drinks, and that one guy who always shows up carrying a giant lizard. On Saturday, June 24, the fest returned for its 17th installment. We (well, just one of us, as it turned out) milled about for nine hours to bring you this by-no-means-complete minute-by-minute recap. Spoiler: We didn’t see the lizard guy.

2:07 p.m. – It’s early, and music doesn’t start for another hour, but this Summer Soulstice already feels…different. Sure, there’s plenty of competition today—88Nine’s 10th anniversary shindig across town, the Downer Classic a few blocks over—but it’s hard not to chalk up the slightly muted mood to the many “For Lease” signs scattered throughout the grounds. G-Daddy’s BBC, The Hotel Foster, Rosati’s, Rascals, and The Winchester are all currently out of business, with Hotch to follow on Sunday. Fittingly, and despite the annual dodgeball cage, the east side of North Avenue feels a bit underpopulated. A few food trucks and a Pilcrow Coffee bike cart do their best to fill the gaps left by the recently departed businesses. 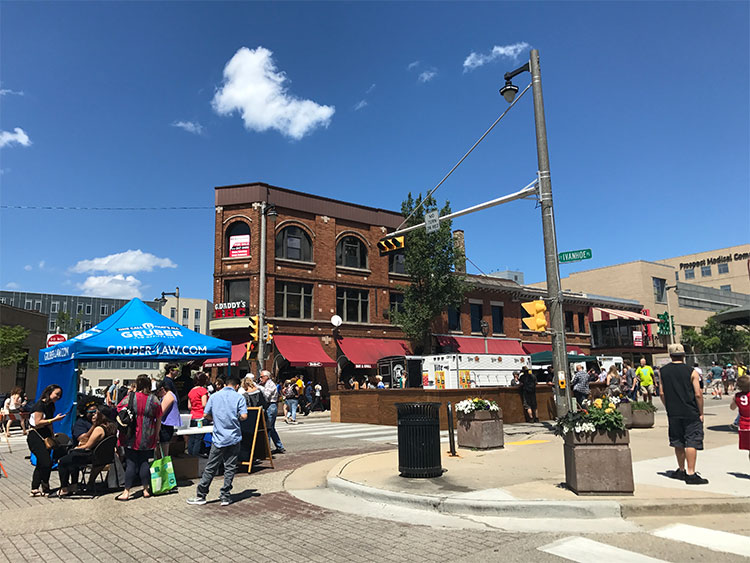 2:10 p.m. – The west end of North Avenue, however, is in full swing. Oodles of vendor booths, a makeshift bar outside Von Trier (and a live blues band on the patio), BMX shenanigans next to the East Library, plenty of action at Vitucci’s, and a rowdy hole-in-one competition courtesy of Nine Below have the fest feeling like it should: fun, carefree, packed. Plus, the weather is absolutely gorgeous.

2:28 p.m. – So, um, there’s still not much going on. We grab a vodka and Red Bull for some reason, watch some kids scurry up the Adventure Rock climbing wall, and hunker down on Murray Avenue. There’s a bouncy house here, a small “parklet” outside Divino’s, and promises of businesses to come. 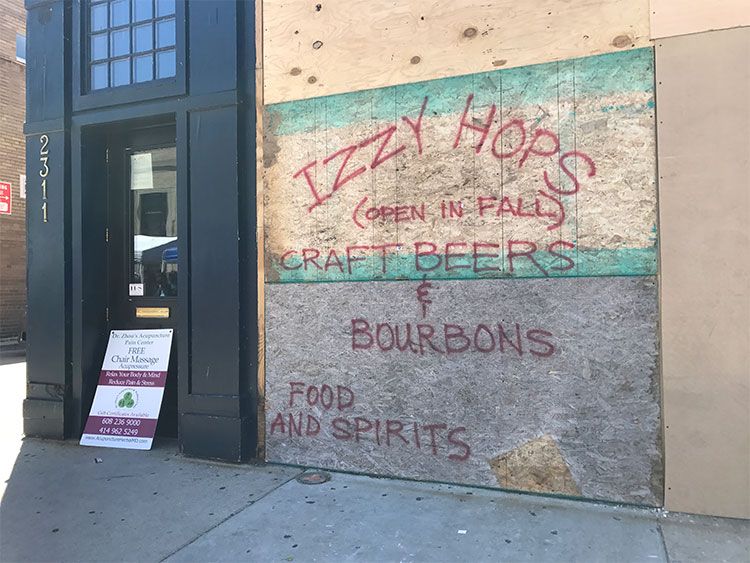 2:57 p.m. – The last of the Milwaukee bohemians, Sigmund Snopek, is playing outside the last of the North Avenue bars, Hooligan’s. And he’s not just playing: he’s playing that big-ass alpenhorn he always carts around, resting it on a table and blowing away. 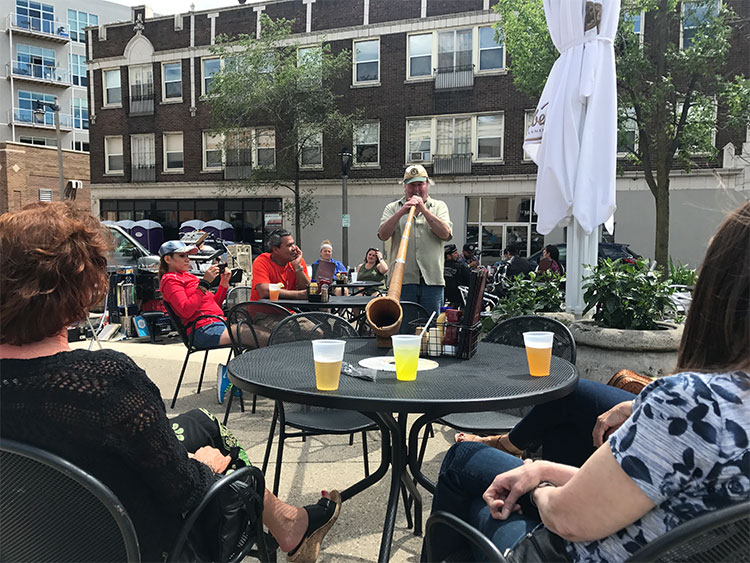 3 p.m. – Sax guy on the corner of North and Farwell is playing “Single Ladies.”

3:15 p.m. – We shoot the shit with Fred Gillich, who is manning a booth full of his “Too Much Metal” gear and “414” flags. Discussed: the People’s Flag of Milwaukee (Gillich isn’t a fan), the changing face of the East Side, the changing face of the Third Ward, etc. Former NEWaukee head Ian Abston drops by via bike and everyone gets along and has a nice conversation and refrains from telling each other to go get bent. Crazy times.

3:17 p.m. – Okay, music! Amanda Huff is up first on the Murray Stage. She opens with “Neighboring Moons.” Later, she plays “Nomenclature.” She’s terrific.

3:31 p.m. – Girls Rock alums Negative/Positive win over the West Stage with their angsty, adolescent punk rock ditties (“Autumn Leaves”), as well as their unlikely tributes to the Percy Jackson books (“Papercuts”). “It’s great to be back at Summer Soulstice!” lead singer Ava G. proclaims like the grizzled festival vet she is. Fun fact: We’re a year older than the combined ages of all three Negative/Positive members (13, 13, 12)! Meanwhile, proud dad Nathan Schleicher beams while sporting a Milwaukee Record T-shirt.

3:49 p.m. – The School of Rock kids are killing it on the East Stage with a legit cover of “Rebel Yell.” The preteen singer is effortlessly dishing out high fives to the crowd while delivering unnerving lines like “She don’t like slavery, she won’t sit and beg / But when I’m tired and lonely she sees me to bed.”

4:36 p.m. – Myles Coyne kicks off his set on the Murray Stage with a sample from UHF. “Life is like a mop,” says Stanley Spadowski. “Sometimes life gets full of dirt and crud and hairballs and things and you gotta clean it out.” Coyne’s set is crunchy, full of hooks, and tons of fun. Our notoriously dance-adverse three-year-old can’t stop moving. 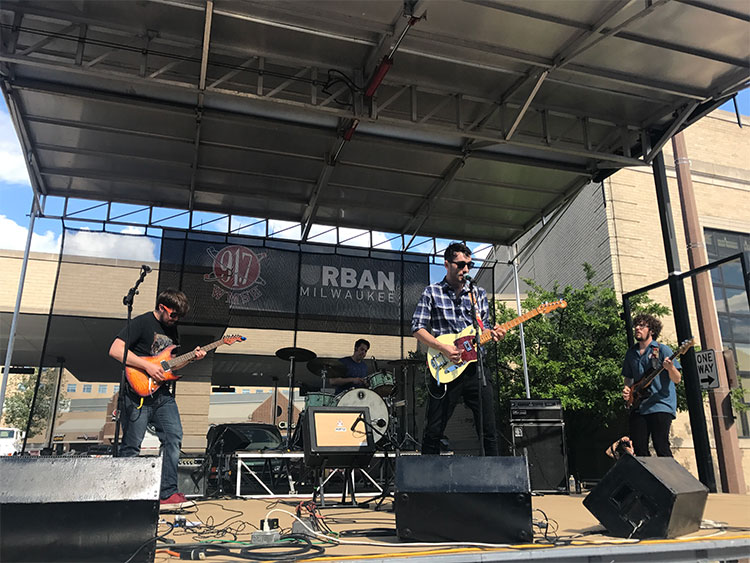 4:50 p.m. – Over at the West Stage, B-Free is explaining the genesis for her song “9 To 5” (from her 2012 album Open Mic, Open Heart). Turns out, she was working at the Wisconsin State Fair, “selling Leinenkugel’s at the horse stables.” No dig on the State Fair (Leinenkugel’s is still lousy), but B-Free’s new gig suits her much, much better.

5:32 p.m. – Biggest clash of musical styles of the day: Marielle Allschwang finishing up her soundcheck, only to be followed by the sound guy blaring Aerosmith’s “Dude Looks Like A Lady.”

6:23 p.m. – Allschwang’s second-to-last song is the title track to her 2015 record Dead Not Done. It remains a stunner. There’s simply no one we know of making music this otherworldly, this strange but familiar.

6:35 p.m. – Overheard at Mr. Señors—a.k.a. that little Mexican food takeout window next to Paddy’s: “How big is the big-ass burrito? Big? Fuck yeah!”

7:15 p.m. – Good god, the Platinum Boys are great. This is one of the band’s first shows with new drummer Henry Chern, though you’d never know it by how assured and fun the whole thing is. The West Stage crowd is full of big grins and variations on “Whoa, these guys rock!” Jay Anderson, meanwhile, is walking around with a whip.

7:35 p.m. – Speaking of whips, another “Whoa, these guys rock!” band is, well, Whips. A sizable crowd is assembled in front of the East Stage as Ashley Smith and company work through their wheels-on-fire catalog. Happily, the set includes one the best Milwaukee songs of the year, “Ms. Terry.”

8:13 p.m. – Brett Newski is hawking merch from a tent and calling out to the Soulstice crowd via microphone. “Get ’em before we get sued!” he says of his “Tom Petty may or may not be Jesus” shirt. We may or may not buy one, though not from Newski: his dad has dropped by for a few minutes. Later, when we ask the Newskis if we can trade our shirt for an “Aaron Rodgers may or may not be Jesus” version (we smell an early Christmas gift for mom), they just toss it in free of charge. Thanks! 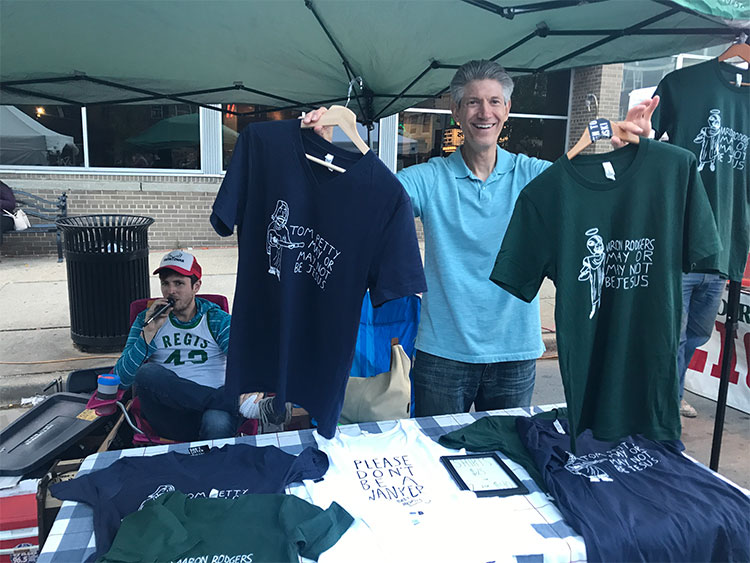 8:25 p.m. – A storm is quickly brewing in the west, causing people to scatter. Whatever: We watch The Fatty Acids play old and new hits like “Airsick” and “Strangers” on the West Stage anyway. When the rain finally does come, Maritime/Benjamins guitarist Dan Hinz magically appears and covers us with a blanket. Thanks!

8:53 p.m. – Okay, time to duck into Landmark Lanes for a friend’s going-away party. On the way down we pass two people we always get weirdly starstruck around: Liz Smith and Kari Houghtaling, the creators of that two-woman remake of Home Alone.

8:56 p.m. – Someone in the Landmark has a bunch of week-old kittens in a bag, which seems about right.

10:15 p.m. – It’s surprisingly cold outside when we finally emerge and see WebsterX send the packed East Stage crowd into a frenzy. Is there any better opener than “Lately”? Hell, is there any better closing act than WebsterX? He’s one of Milwaukee’s biggest names for a reason, folks.

11.10 p.m. – Oh it’s getting late and we’re tired and we’ve had plenty to drink and this neighborhood is so different now and what does it really matter anyway? We’re at Yokohama, the site of a purported midnight GGOOLLDD DJ set, watching Rashomon and explaining to a random dude how this place used to be a place called Yield. “Really?” the random dude says. “I thought Yokohama was always here.” Huh. 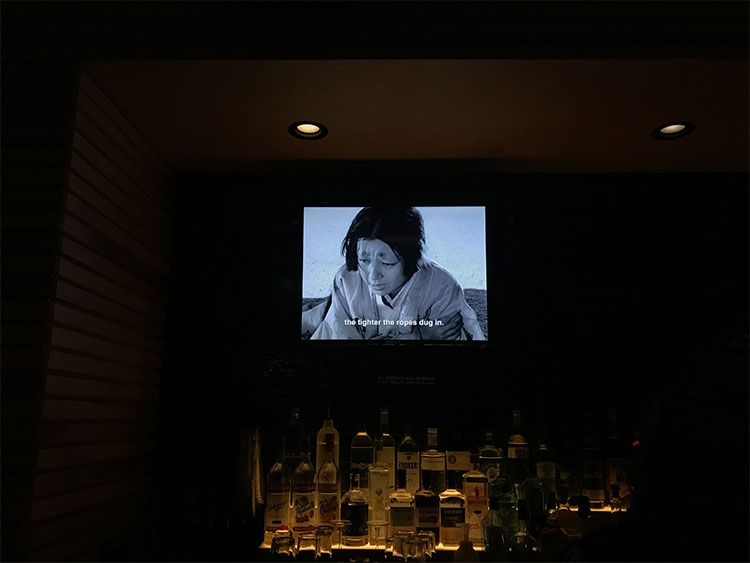