The past few years have been rough on Timothy Showalter. First, his mother-in-law died in a car accident in 2018. Then his beloved cat had to be put to sleep due to cancer later that year. He struggled with his purpose as a songwriter (a theme found on 2019’s Eraserland) as well as processing the grief and comforting his wife, Sue.

“We lost Sue’s mom to a car accident, which was about as sad of an experience, an unexpected experience as we could have ever gone through, especially my wife,” says Showalter, during a recent phone interview.

He was despondent and felt lost. In 2019, he and his wife decided to move from Philadelphia to Austin because they felt happier there. Austin offered them a tight-knit and close community, something they fell in love with through multiple visits to the South By Southwest festival.

“It just was a moment where in the midst of all that grief and trauma, we just decided life is so short and it can go away in an instant, and if we want to move to Austin, let’s just move there,” he says.

“I’m outside right now and there’s sun in my backyard and a big tree and I feel extremely grateful to be here,” he says. “I’ve never been so influenced by my surroundings before. I truly think there’s something in my DNA that was just maybe always waiting to move to Texas. And the fact that I thought it was impossible, then it became a reality, it feels like a dream still.”

On the album’s 11 tracks, he examines his recent grief and his journey into sobriety. In that search for peace and health, he found joy, celebration, and newfound strength. While the feeling of loss and grief will never go away, he’s found that happiness is still quite obtainable, and this new chapter can be full of surprises and adventures.

The album’s songs dream big. For example, “Somewhere in Chicago” glides by with a comfortably warm sonic atmosphere and acts as an ode to the late John Prine and his unwavering personality. It delivers pictures of him happily wondering Chicago forever. On the song he sings “Where you gonna hide when the mist is gone / Take it out back and use it in a song / Scream it in a pillow so she can’t hear you / Drop it in the water and I still miss you.” It’s a powerful remembrance of one of the greats and statement to keep using music to better others’ lives.

On “Jimi and Stan,” Showalter pays tribute to his beloved cat, who had to be put to sleep because of his cancer. Around the same time, they made the heartbreaking decision to put their dearly beloved cat Stan to sleep by imagining Stan and Jimi Hendrix hanging out in heaven together. They’re having the time of their lives with each other, going to shows, wide smiles and enjoying each other’s company. It’s quirky, but captures one of the big ideas about of existence and interconnection that fills the album.

Rather than brooding and mourning for the entirety of In Heaven, Showalter gives his full commitment to finding truth and wisdom in song.

“And I think I pulled it off. I’m still trying to figure it out, but I’m very proud of the fact that I didn’t have a record that was completely comprised of me talking about just my problems,” Showalter says. “That was necessary for me for all those records, but it was definitely time to put that to bed and start looking at other people and thinking about their experiences and how myself relates to them and how I can be there for people more.”

Showalter sings with a growled conviction, amongst towering and hypnotic sonic melodies. A standout lyric in the song is “Back in life I wonder why we hang around so long / For me it’s all the songs I haven’t found.”

That imagery on “Jimi and Stan” is very relatable and it pulls on similar heart strings for anyone who has lost an animal companion. Also, on a personal note, Hendrix’s inclusion in the song makes me think of my father, who died tragically five and a half years ago, and the ways he got me into music. I fondly recall him telling me how he skipped a track practice while in high school to see Hendrix perform.

Showalter has a distinct way of expressing the human condition in his lyrics and it’s fascinating to see the contrast between the mellow and brighter moments on the record. For example, the spacey country album opener “Galacticana” features the line “Laughing as a self-defense, crying at my own expense together” and finds him singing about solar winds pushing him further from his mother.

The song, which jettisons the listener like an astronaut into sweeping melodies, reflects on the things that we lose along the way as we get older and drift further into adulthood. During our most testing moments of grief, our emotions can get upended and mixed up. In this case, laughing as a means to cope with the flood of emotion. It can be a discombobulating experience that leads to a confusion of emotion and makes us realize the fragility of life.

At the same time, the song celebrates the joys and strength we find in these moments. “I believe that ecstasy happens when we all get together,” Showalter sings. We find strength in people that rally around us and find joy and growth in new experiences.

The journey to happiness Showalter takes on that song—and in the album as a whole—is something that makes his music so relatable and powerful. To anyone who has experience tragedy and loss, In Heaven is an incredibly relatable Strand of Oaks album in which Showalter proves his songwriting prowess with emotionally vibrant fervor that reach the heavens.

Strand Of Oaks will play in support of Jason Isbell And The 400 Unit at Riverside Theater on Thursday, December 2. 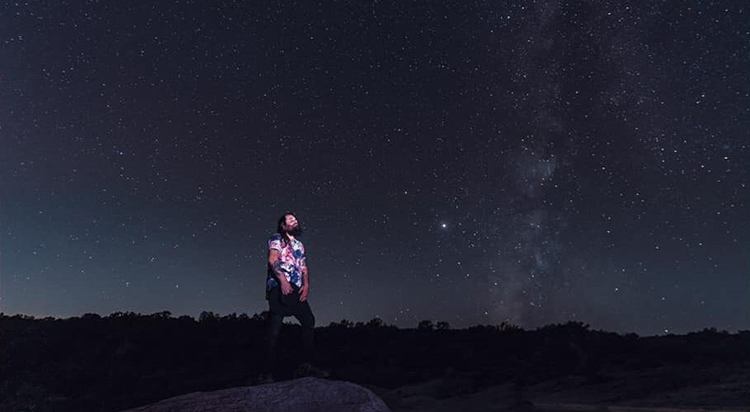