Summerfest plays host to more than 800 acts each year. By the time the colossal 11-day Midwestern musical mainstay concludes, thousands of musicians will take the stage to perform energetic live sets for an estimated 900,000 guests. But what if live music isn’t your thing? Worry not, Summerfest has you covered. For those of us who’d prefer to eschew the live band experience of the “World’s Largest Music Festival” in favor of kicking back and listening to polished songs someone mixed and mastered, the Big Gig offers “Taped Music” (née “Pre-Recorded Music”) at JoJo’s Martini Lounge each and every day of Summerfest.

Before band one took the stage, before so much as a single $8 Summer Shandy was sold to a dude in jorts, and prior to the true start of Summerfest, I used my media laminate to gain early access to the festival. Keeping with Milwaukee Record’s annual tradition, I found myself seated in solitude at JoJo’s Martini Lounge at the beginning of Summerfest to listen to a playlist at one of the planet’s largest live music events. The hour that followed featured introspection, abject sadness, a chance meeting, and, uh, some Sister Hazel for good measure. 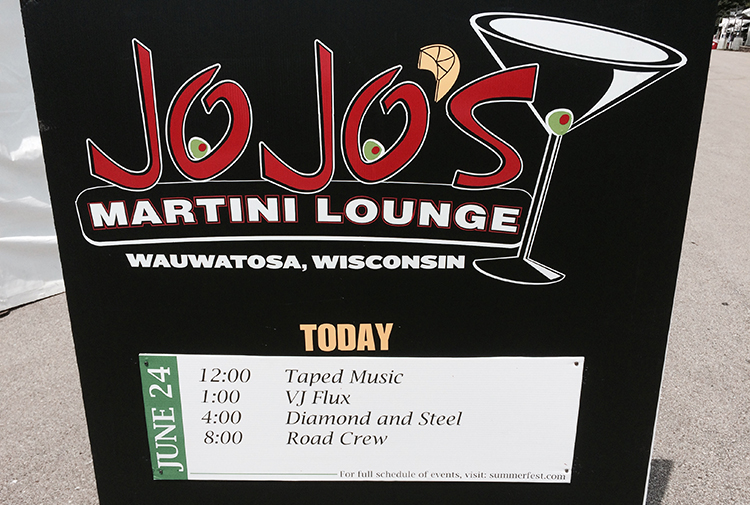 Noon – “You And Me” by Lifehouse
Despite Lifehouse’s biggest single in all its optimism welcoming folks to the grounds at the strike of noon, not a soul—save for myself and JoJo’s employees—were in the lounge. I though that people would surely be filing in any moment. Sadly, it wouldn’t be in time to enjoy this sensitive 2005 single.

12:04 – “All For You” by Sister Hazel
The romantic set-starter was chased by the infectiously upbeat “All For You,” the one and only hit song from Sister Hazel. Still alone in the expansive sea of chairs, this 19-year-old song truly was all for me. As the shaky, ultra-positive harmonies tested the meaning of “alternative rock,” I settled into a folding chair at one of the many unoccupied cabaret tables. With 56 minutes left, I looked up Sister Hazel. They’re still a band and have all their original members. Weird. At the risk of losing readers, “All For You” is actually a pretty decent song.

12:08 – “Beat It” (Studio Version) by Fall Out Boy feat. John Mayer
I eased into the idea that people might not show up. After all, it was opening day and, like, actual live music would be starting elsewhere very soon. Suddenly, a guy wearing all orange stepped out on stage and played a modern cover of the unmistakable Michael Jackson tune. He introduced himself to the audience (me) as Flux and said, “It’s all about having a good time. I do music videos! It’s all a big party.” I’ll be the judge of that. I’ve attended upwards of five parties in my life, so I’d like to think I know a rager when I see one.

12:11 – “Chains” by Nick Jonas
How would VJ Flux back up his claims? With a song from one of the Jonas Brothers. It took 11 minutes, but I finally didn’t recognize a song. Shazam (which I downloaded for last year’s Pre-Recorded Music review) indicated it was “Chains” by Nick Jonas. The song is repetitive, but had some epic production behind the high-pitched vocals of the 22-year-old singer. Holy shit, I’m eight years older than Nick Jonas and I’m alone in a tent, taking notes on his song. Where did I go wrong?

12:15 – “Someone Like You” by Adele
The familiar piano of the downtrodden ballad that helped put Adele on the map signaled it was time for a beer. I walked along the lake to, once again, have the first beer the Lucile’s kiosk poured all Summerfest. With my “Punch You In The Face IPA” in hand, I made my way through the maze of vape stations, food stands, and clothing vendors. As I hastily passed by one tent in effort to catch the end of the next song, I noticed a now-familiar song playing. It was “Chains” by Nick Jonas.

12:19 – “Try” by P!nk
Despite the slow, pressure-free pour that christened the nearby beer stand, I managed to make it back to JoJo’s in time to hear the final chorus of P!nk’s “Try.” I’d never heard the song before and ! d!dn’t really l!ke !t. With the exception of staff and security, I was still alone in the lounge. Even Flux went somewhere else.

12:23 – “Here Without You” by 3 Doors Down
Close to halfway into my sojourn of sonic solitude, I decided to make the most of a weird time by taking a load off in one of the wicker chairs along the tent’s northwest wall. I’ve heard “Here Without You” dozens of times, and never intentionally. Still, slunk into the faded red cushion that would soon absorb the farts and spilled Rockstar™ Electric Lemonade of Festers from all corners of the heartland over the next 11 days, I truly heard this butt-rock ballad for the first time. There I was, sitting alone and day-drinking a flat beer I didn’t like in a tent on a Wednesday so I could write a story about an experience. What’s wrong with me? Why do I do these things? Is doing shit like this the reason my girlfriend dumped me? I guess this is what my career has come to. Fuck.

12:27 – “High” by Young Rising Sons
Perhaps more aware of 3 Doors Down’s introspective abilities that I was, Flux followed the downcast number with a decidedly optimistic, whistle-laden tune called “High” by Young Rising Sons, a band I’d never heard before. However, the Jersey-based alternative rock (which I’ve now learned is an utterly meaningless descriptor) outfit’s peppy single didn’t have the desired impact. Instead, the cheeriness taunted me in all its falsetto-infused glory. I pounded the remaining dregs of my IPA and pondered whether I should join Tinder. I decided not to.

12:31 – “Good Life” by OneRepublic
As the opening notes of OneRepublic’s “Good Life” hit me, I was now sufficiently inundated with positivity. Okay, I get it. Life is okay sometimes or whatever. If you say “good life” enough and whistle, you can fool yourself into temporarily believing existence isn’t just some cruel cosmic joke. Anyway, this song isn’t good. The repetitive track was interrupted by a JoJo’s employee chipping away at ice with a scoop. The sound caused me to look up from my notes and notice eight other people in the tent, one of whom was looking back at me with a look of puzzlement, despite the fact that she, too, was listening to OneRepublic in a martini lounge at half past noon.

12:34 – “Stronger” (What Doesn’t Kill You) by Kelly Clarkson
As she is known to do, American Idol—in both the literal and televised sense—Kelly Clarkson struck me with a new, improved outlook on life. As the From Justin To Kelly co-star reminded all nine of us martini loungers whatever doesn’t kill us makes us stronger, I regained focus. I was no longer a sullen, deflated husk. I stood up and breathed in deep. There was a whole world of possibility, love, and potential happiness beyond those tent flaps. Only 26 minutes of self-imposed weirdness remained.

12:37 – “Beautiful” by Christina Aguilera
Never mind. Not unlike a parent telling the lame kid they’re special and they’re capable of greatness, the slow, dour keystrokes of Christina Aguilera’s biggest hit to date was the audio equivalent of a participation ribbon. It tamped my spirit down. “You are beautiful, no matter what they say.” Finally, a song that attempts to raise the listener’s spirit while simultaneously suggesting people have called them ugly in the past. Call me old fashioned, but I miss the days when X-tina sang songs about rubbing her the right way.

12:40 – “Riptide” by Vance Joy
I didn’t catch much of “Riptide” because Flux himself walked up to me and asked what I was doing. Tattooed, probably in his early 40s, and donning angular shades and a florescent tank-top with “Flux” on it, the VJ looked every bit like an entertainer. After introductions were exchanged and I assured him I was not fucking with him, I asked him about his predominately positive playlist. “I like to read the crowd,” he said. With the realization that I was the crowd, I deduced that I must’ve been visibly dejected enough for Flux to “read” that I needed a half hour pick-me-up.

12:44 – “Everybody Talks” by Neon Trees
While this overplayed pop-rock song played, Flux told me he’s been VJ-ing for three years, ever since he worked a New Year’s Eve party at the Bayshore Mall Bar Louie. With a three-monitor set-up, the Menomonee Falls native has an arsenal of more than 2,000 music videos he purchased from iTunes. Not all songs he plays have video pairing, but he said people tend to prefer to watch a music video for the song while it plays, calling it a “Pavlovian response.”

12:47 – “Boomerang” by Plain White T’s
I wrapped up my conversation with metro Milwaukee’s most positive video jockey as Plain White T’s played and he left to prepare for his 1 p.m. slot. He told me he’ll be appearing at JoJo’s Saturday, Tuesday, and next Friday. Interested in having Flux take your party up to 88 miles per hour? Email him at [email protected]

12:51 – “Beautiful Day” by U2
I returned to the wicker chair to serve the remaining sixth of my hour-long sentence. To this point, the songs averaged about 3.5 minutes in length. That meant I probably had three more left. Though it’s, like, U2’s 11th best song, it was still the best song I’d heard since “All For You” ended about 45 minutes ago. Looking outside the dim and drafty structure, I noticed it actually was a beautiful day. The sun was shining, Lake Michigan looked pristine, the smell of PizzaCone cascaded through the light summer air, and I no longer used an AOL.com email address. Maybe life wasn’t so bad after all.

12:55 – “Brave” by Josh Groban
Fuck this guy. Lolz. He should stick to being kind of funny on one episode of Comedy Bang Bang! and quit music forever.

12:58 – “Beat It” (Studio Version) by Fall Out Boy feat. John Mayer
The last song was a repeat. The Michael Jackson cover was apparently Flux’s calling card. He re-emerged and shot smoke from his VJ station. He followed that with bubbles. I waved goodbye and, taking Patrick Stump’s advice, I beat it. My day at Summerfest was over, but I’ll be back…to see live music. 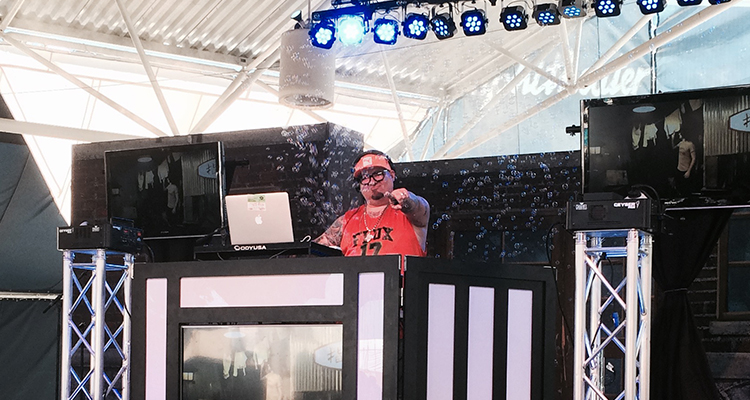