Without fail, it’s on the schedule every year. No, not I’m not referring to “Joan Jett & The Blackhearts” or “Wayne & Wingnut – Red Hot Chili Puppets”—though they are, too. Along with more than 700 bands (closer to 800 with the 75 on the Rebel Stage) in the self-anointed “World’s Largest Music Festival,” one stage allots a daily block lasting between one and four hours that’s specifically devoted to music that isn’t played by a live band on site. It’s better known to Summerfest visitors as “Pre-Recorded Music.”

In all, some 17 hours of Summerfest stage time at JoJo’s Martini Lounge will be pre-recorded music. Combine that with the unannounced 90-minute to three-hour blocks of pre-recorded music at the KNE New Music Stage each day—to account for the 11 spots cut as part of its epic bed-shitting between last year and this year—and patrons will hear well over an entire day’s worth of pre-packaged tunes.

I could rail on JoJo’s, saying there are tons of real-life entertainment alternatives (many of whom are both talented and local) that beat settling for sterile sounds captured by microphones in a booth months, years, or even decades ago. But, to be honest, I’d never actually heard a block of the Martini Lounge’s pre-recorded music. Who knows, maybe it’s an awesome time. So when the 47th Summerfest began at the stroke of noon Wednesday, I was already seated in the Martini Lounge, poised to take in the entire one-hour block of The Big Gig’s most frequent booking. I went to The World’s Largest Music Festival to listen to pre-recorded music.

Thanks to my media thingy on my neck, I was allowed through the gates around 11:30 a.m. Inside, there was some activity from vendors and Fest employees making final preparations before people were allowed inside, but being accustomed to the sea of people clogging the corridors, there was an eerie calm in the place. I basked in the fleeting moment of Summerfest seclusion and walked around the grounds. I continued to wander until I happened upon my favorite haunt, the kiosk for Louise’s Restaurant (a Water Street Brewery purveyor I’ve mentioned before). At 11:57 a.m., I was poured the first beer the station sold all Summerfest—which simultaneously filled me with pride and shame. I hastened my pace, and took my IBA to a cabaret table at JoJo’s just as the clock struck noon and patrons were permitted through the gates.

As this was all happening, Michael Bolton’s “How Am I Supposed To Live Without You?” was halfway over. Between being the only person in the dim and drafty tent-lounge (who wasn’t working, at least) and the lovelorn soft rock classic, I took a couple sizable chugs of my dark brew and thought, “So this is my life.” I was happy when the song was over, until I wasn’t. I’d forgotten to download Shazam and I didn’t know the second song. While the song identification ap was downloading, the song came and went. It sounded kind of like Bonnie Tyler, so we’ll just go with that. She’ll appreciate the press and a 29-year-old man knowing who Bonnie Tyler is at this point in her career. Partway into the next song (which seemed to borrow the melody from Rob Thomas’ “Lonely No More”), Shazam opened and revealed the song was “Me And My Broken Heart” by Rixton. So far, so bad.

Suddenly, things got a lot better as the airy, familiar opening strum of “Kiss Me” by Sixpence None The Richer brought me back to life. By now, a couple middle-aged stragglers took a seat a couple tables over, each facing the stage, suggesting they were here for live music that would start in about 45 minutes. The lively 1997 hit had revived me, but where would the JoJo’s playlist take me from there? Turns out, it was a remix of Beyonce’s “If I Were A Boy” that featured R. Kelly. Maybe it was the unique perspective Bey’s lyrics brought, or, more likely, the noon IBA I’d already finished, but I got to thinking. I’m a good boyfriend, right? Did I have it in me to be a better man? Meanwhile, JoJo’s staff (each outfitted in a “Got Martini?” t-shirt) were loading massive tubes of pre-mixed cocktails into tap towers for consumption by respectable folks later in the day. American Idol contestant David Archuleta’s “The Other Side Of Down” followed. The two old guys looked equally nonplussed by the Archuleta effort and we all fixed our attention on the guy readying the stage for the performance now 30 minutes away.

Soon, we were joined by a late-teen or early-20s girl and a tween boy, both of whom seemed marginally happier to hear “A Thousand Years” by Christina Perri (from the Twilight: Breaking Dawn soundtrack) than we were. I recognized the next one! “Big Yellow Taxi” by Counting Crows. Since I had less than four minutes to duck out, I trekked to the nearby SoLo Pizza stand, where I found they’d apparently kept busy in the offseason by developing a Macaroni And Cheese Pizza Cone—which I ordered without blinking. By now, the grounds I’d walked virtually alone not an hour earlier were filling in quickly. In the bustling boardwalk, I started to understand how some inmates grow to prefer prison. I longed for my tent-top cage with the bars of radio-friendly Top 40 tracks to hold me in. I jogged back with my pasta-pizza-cone in time for the majority of Ed Sheeran’s decent (if not wholly unoriginal) “The A Team.” 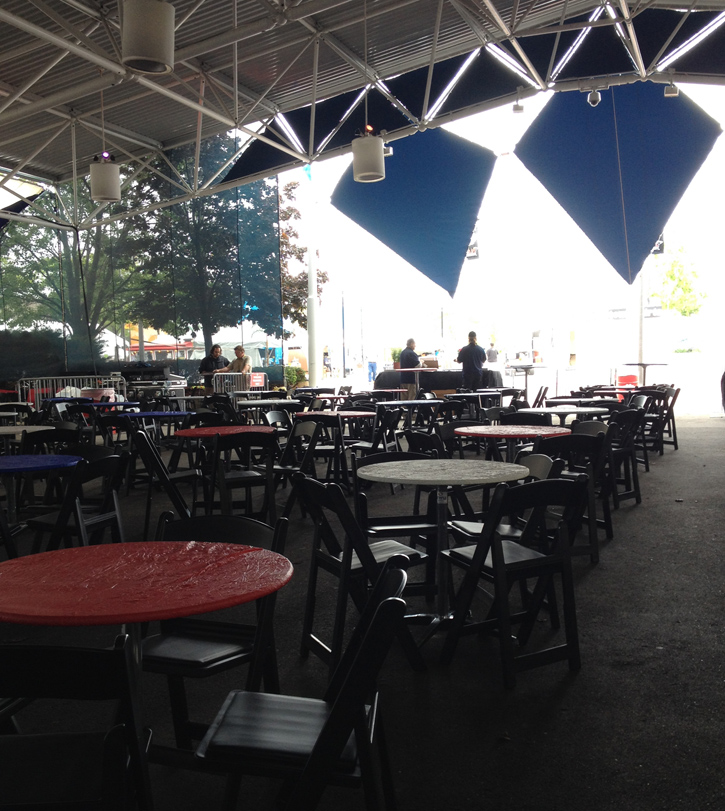 The palatable song and quality cone were quickly diminished by a Lenny Kravitz song called “Stand” that was like a terrible mating experiment between Gary Glitter and The Doors that in no way utilized the awesome afro’ed drummer. She can’t be happy about that song. As I broke my Kravitz trance, I noticed JoJo’s employees were now taking notice of me, the guy sitting alone and intently listening to a playlist before 1 p.m. Alicia Keys’ “No One” made up for the previous song until—GAME CHANGER—a dude took the stage and began to sing songs to sound-check. He did great renditions of Frank Sinatra’s “Luck Be A Lady” and “The Lady Is A Tramp” and upwards of nine people began to take notice. This live music stuff was pretty cool!

But as abruptly as it began, it was over. The Martini Lounge reverted to its pre-recorded roots with the somber, soul-crushing “I Would Like To Call It Beauty” by Corinne Bailey Rae; Ingrid Michaelson’s “Be OK” (a preview of her July 5 headlining gig); and David Gray’s “Draw The Line.” By that time (12:56 p.m.), people had entered the canopy confines. Some women in their forties bought cocktails and sipped them in padded wicker seats near the back (which I foolishly missed seeing until that moment). Fittingly, Wednesday’s Marcus Amphitheater headliner Bruno Mars and his “When I Was Your Man” brought the hour of pre-recorded music to a close. As I exited the tent to the world of un-recorded music beyond, the women sang along to Mars’ song. “Good luck, ma’ams,” I thought. “You have a long day ahead of you.”

The same couldn’t be said for me. I left the Summerfest grounds the same way I’d entered just 90 minutes earlier—doubting the merit of occupying a block of festival time with pre-recorded music. It wasn’t great, but at least I’d meekly dipped my toes into the sonic waters of Summerfest’s aural offerings. Next time I’ll try live music.