But will any of these articles detail how the author, when they were 11 years old, totally received a kick-ass cassette single of Guns N’ Roses “Paradise City” for St. Nick’s? Backed with an acoustic version of “Move To The City”? With John Gurda recently retiring his Journal Sentinel column, it’s clear the only place you’ll find such an enthralling, “tell us you’re old without telling us you’re old” story is right here on Milwaukee Record. Right next to the articles about fish frys and binge drinking.

Let me set the scene: It was 1989. I was 11 years old, weeks away from turning 12. My hobbies included reading, listening to the music of Weird Al, and getting the shit kicked out of me at least twice a week. I had a bowl haircut and an imaginary friend named Marty. (I loved Back To The Future.) All these years later, it’s remarkable how little I’ve changed.

Was I a big Guns N’ Roses fan? Back in the monoculture days of the ’80s and ’90s, it was hard not to be a fan of something like GNR. They were ubiquitous. They were constantly on the radio, constantly on MTV, constantly in magazines and newspapers. Appetite For Destruction had been out for more than a year in late 1989, and songs like “Welcome To The Jungle” and “Sweet Child ‘o Mine” were inescapable. When I think of my childhood bowling league or my cousin’s wood-paneled basement, I hear the opening chug of “Mr. Brownstone.”

So yeah, I liked GNR. I also liked The Dead Milkmen, They Might Be Giants, the aforementioned Weird Al, and Kenny Rogers. Nirvana and puberty would change everything a few years later.

But back to St. Nick’s ’89. It must have been a school day, right? Mornings therefore meant getting ready for school (St. Mary’s Catholic School, natch), scarfing down some cereal (we were a Cap’n Crunch household), and watching whatever live-action Canadian kids show Nickelodeon was playing in those days (shout-out to Today’s Special). But on this particular morning, a little stocking stuffer from the gift-giving patron saint of “sailors, merchants, archers, repentant thieves, children, brewers, pawnbrokers, unmarried people, and students in various cities and countries around Europe” was also in order. I was thrilled.

I can still remember exactly where my St. Nick’s stocking was hung: in our dining room, right below my mom’s commemorative Elvis Presley plates. I ran to it, knocking over my younger brothers in the process. I yanked it off the wall, likely spooking our pet cat Smokey. I shoved my hand inside. I felt something. I extracted…this: 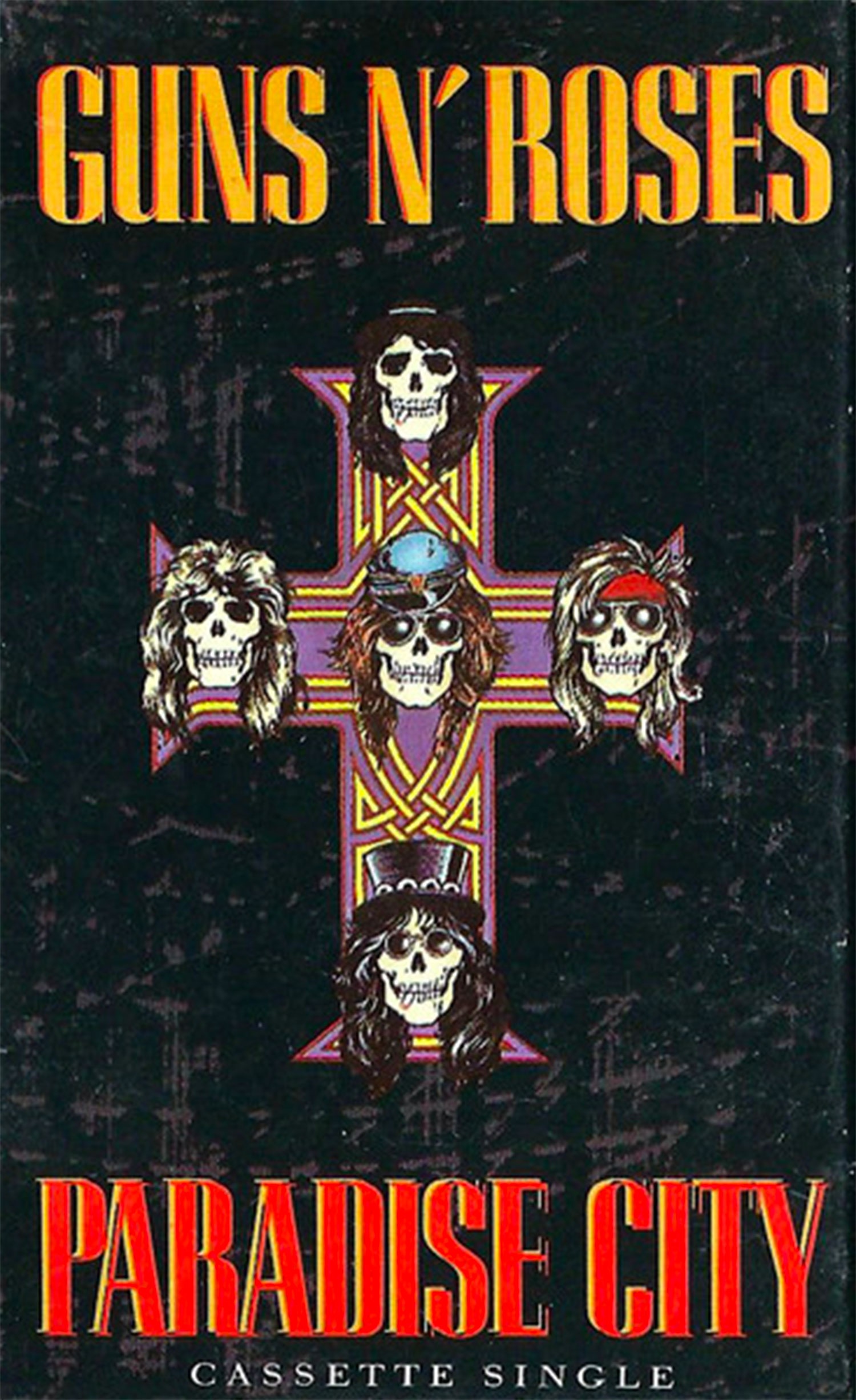 Ho-ly shit. GNR! “Paradise City”! Backed with an acoustic version of “Move To The City”! Those skulls! That cross! That cardboard slipcase that said “This is a cassette single and not a full-length cassette, and thus only $8.99 instead of $18.99 at Sam Goody”! If memory serves, previous St. Nick’s presents were of the candy and yo-yo variety. Never a tape, and certainly never a tape from those L.A. bad boys Guns N’ Roses. I was over the moon. I unwrapped the thing, popped it into the nearest boom box, and blasted it for all of Mayville, Wisconsin to hear:

Would there soon be a “naughty” version of this song circulating amongst the boys of St. Mary’s? Yep!

Take me down to St. Mary’s School
Where the grass is brown and the girls have no…

I must have played that cassingle 500 times in the months and years to come. It occupied a permanent spot in my double-sided tape case for decades—alongside my Weird Al tape collection (everything up to Running With Scissors), some dubbed Beatles stuff, and maybe a Helmet tape or two. I can’t find that tape case now—I suspect it was a casualty of an ill-advised “burn all my old stuff and start anew” thing—but I still remember getting that GNR cassingle for St. Nick’s like it was yesterday.

It’s 2022 now, and—if you’ve done your math—I’m weeks away from turning 45. Good grief. I’m a parent these days, and the things that hang around forever have been on my mind.

Because let’s state the obvious: St. Nick didn’t slip me a copy of “Paradise City” all those years ago—my parents did, most likely my mother. Not an ancient saint who harbored a love for late-’80s Sunset Strip rock and roll, but my mom. I imagine the GNR tape was an impulse buy for her. She was probably knocking out some Christmas shopping at the Forest Mall in Fond du lac (R.I.P.) and picked it up on a whim. She stuffed it in my stocking on December 5, and forgot about it on December 6. The end. I’ve learned that’s what parents do to survive: keep moving.

• Fear, Jon Bon Jovi, and the worst Q&A ever