The following article originally appeared in the December 2019 edition of Colectivo Coffee’s “Off The Record” print-only periodical/crossword puzzle. You can pick up “Off The Record” free of charge at all 13 Milwaukee-area locations.

Some people are afraid of death. Others are afraid of public speaking. Indiana Jones is afraid of snakes. I fear only one thing: Q&As. As in “those awful question-and-answer sessions that sometimes follow concerts/films/speeches/etc.” As in “the part of the concert/film/speech/etc. where I bolt for the door and throw myself into traffic.” And I have Jon Bon Jovi to blame.

The year was 1997. I was 19 years old and living in the University of Wisconsin-Milwaukee dorms. (Sandburg Hall, north tower, 19th floor, single room.) For reasons that were and shall forever remain a mystery, I wore a lot of black pleather jackets. Jesus, I think I even had a black pleather baseball cap. I played in a band, entertained notions of becoming a filmmaker, and was a complete and total doofus.

One day, my longtime and long-suffering girlfriend (hi, Nicki!) announced she had tickets to see the one and only Jon Bon Jovi perform an intimate solo acoustic show at the Marcus Performing Arts Center. I think she got the tickets from her dad (hi, Dave!), who was a full-time car salesman and a part-time Dick Contino fan. The show was later that night. Would I like to go? I wasn’t a huge Bon Jovi fan, but, I dunno, “Bad Medicine” kind of ripped, so why not? I dusted off my best pleather gear and got ready.

So let’s talk about Jon Bon Jovi—or, as he’s known to me and probably nobody else, JBJ. Like I said, I wasn’t a huge fan in the mid-to-late-’90s, but the man’s music was inescapable in the mid-to-late-’80s. Turn on MTV and there he was, topping the yearly music video countdowns with “Livin’ On A Prayer,” “You Give Love A Bad Name,” and/or “Wanted Dead Or Alive.” Walk into any bar or bowling alley and there he was again, power-ballading the hell out of power ballads like “I’ll Be There For You.” Shit, “Raise Your Hands” was in Spaceballs for some reason. Did I have Slippery When Wet and New Jersey on cassette? As someone who once received a cassingle of Guns N’ Roses’ “Paradise City” for St. Nick’s Day, you bet your ass I did.

On to the show. We arrived at the Marcus Center and, along with a few dozen other fans, were ushered into a small room that was more like a classroom than a concert venue. A few rows of seats looked down on a podium, a screen, and a stool. Was this an Unplugged-esque show or a lecture? Professor Bon Jovi!

Apparently, JBJ would perform a brief concert, follow it up with a Q&A, and then follow that up with a movie. You see, the 35-year-old rocker was at a somewhat low point in his career—post-’80s success, pre-’00s resurgence—and he was touring behind a since-forgotten solo album called Destination Anywhere. (Sample lyric from opener “Queen Of New Orleans”: “Nothing’s what it seems / She was a Venus de Milo in her sister’s jeans.”) We were informed that the 45-minute (!) Destination Anywhere film was, in fact, incredible, and that it starred JBJ, Demi Moore, Kevin Bacon, and Whoopi Goldberg. The mind reeled. Also, the whole show was sponsored by WKTI and I’m pretty sure Reitman and Mueller were there.

And suddenly, there he was: Jon Bon Jovi! The man who rode a steel horse, the man who was halfway there, the boy who was addicted ’cause your kiss is the drug, whoa-oh-oh. His once-preposterous mane of ’80s hair had been freshly shorn (remember when Metallica cut their hair?), and he wore dark sunglasses and a black leather jacket. No pleather for this guy! The crowd screamed, JBJ grabbed an acoustic guitar and took a seat, and the show began.

I wish I could give you a minute-by-minute report of the concert—or, at the very least, a lousy setlist—but the whole thing went by pretty fast. From what I remember, it was fine. JBJ played mostly new material from Destination Anywhere (another sample lyric from “Queen Of New Orleans”: “That night I made a move, man I felt hard / When I put my hands in her cookie jar”), maybe a couple of tunes from the Young Guns II soundtrack (“Blaze Of Glory”!), and maybe a slowed-down version of “Livin’ On A Prayer” (you know, like the “Prayer ’94” version that’s on Cross Road). He sounded good! He looked great! It was over and done with in about an hour!

“Okay,” he eventually sighed. Everyone squealed some more and the lady ran down to get her hug, The Price Is Right-style.

Okay, fine. Maybe the next question would be about JBJ’s artistic process, his thoughts on fame and the record industry, or Richie Sambora. Dear readers, it was not. Instead, the second question, courtesy of another OG female fan, was this: “Why did you cut your hair?”

JBJ’s terse response: “Because it’s not the ’80s anymore.” Woof.

JBJ, now looking like he wanted to die: “Sure.”

But the final question took the cake. Earlier, JBJ had played a new song called “August 7, 4:15.” He had clearly explained that the song was about the unsolved murder of his tour manager’s 6-year-old daughter. Jesus. Grim, sad, awful stuff. But that didn’t stop a woman from uttering these words: “August 7 is my birthday! Did you know that when you wrote the song? Tee-hee!”

“Well,” Jon Bon Jovi replied, “I think I already explained what the song is about.” There was a looooong pause. “But happy birthday.”

And with that, if memory serves, JBJ bolted for the door. The crowd tried to leave, too, but Reitman and Mueller forced us at gunpoint (again, if memory serves) to stick around and watch the crappy movie. I’ve been deathly afraid of Q&As ever since. At the 2019 Milwaukee Film Festival, for instance, during a Q&A with Sheryl Lee and Ray Wise from Twin Peaks: Fire Walk With Me, I lasted all of three seconds after some weirdo started in on Wise about unions. Unions! Yeah, Q&As are awful. Thanks, Jon Bon Jovi.

“Janie, Don’t Take Your Love To Town,” from Destination Anywhere, is pretty good, though.

Here’s the answer key for the American Values Club Crossword Puzzle from the December 2019 edition of “Off The Record.” 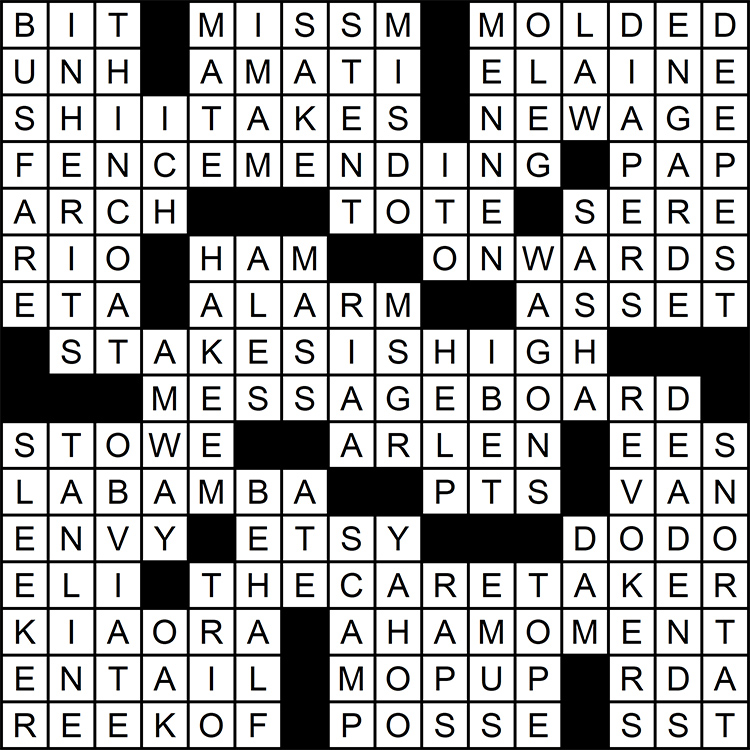