“We’ve been playing that haunted, dirty Eagles Ballroom for 15 years. Look at us now!”

So said Killers frontman Brandon Flowers early in his band’s set Tuesday night at Fiserv Forum. (Flowers quickly followed his Rave dig with “Just kidding! We had some great shows there!”) If Tuesday’s show was something of a coming out party for The Killers (in Milwaukee, anyway), then it was certainly a coming out party for the brand-spanking-new, $524 million Fiserv Forum. Following years of speculation, announcements, and debate (the latter largely concerned with that pesky $250 million in public money), the new Bucks arena finally hosted its first concert. The Killers were there, Milwaukee prodigal sons Violent Femmes were there, roughly 13,000 fans were there, and 8,000 staff members literally patting you on the back and wishing you a great night every 30 seconds were there. Did “The Forum” shine? Yes. Was there a line for the Chick-fil-A? Uh huh. Did The Killers and the Femmes team up for a cover of the theme song to Laverne & Shirley? Milwaukee!

First, Fiserv Forum. It’s a new basketball arena, all right. It’s nice! Walking through its white, glistening, and glass-filled concourses feels like walking through a really nice airport. Or maybe a really nice hospital. There are dozens of “grammable” spots where you can take pictures with deer statues or Bango statues or giant basketball hoops. There are tons of good food options, a few areas that feel like fancy food courts (excuse us, food HALLS), and about 38 Drink Wisconsinbly stands. Prices are about what you’d expect. 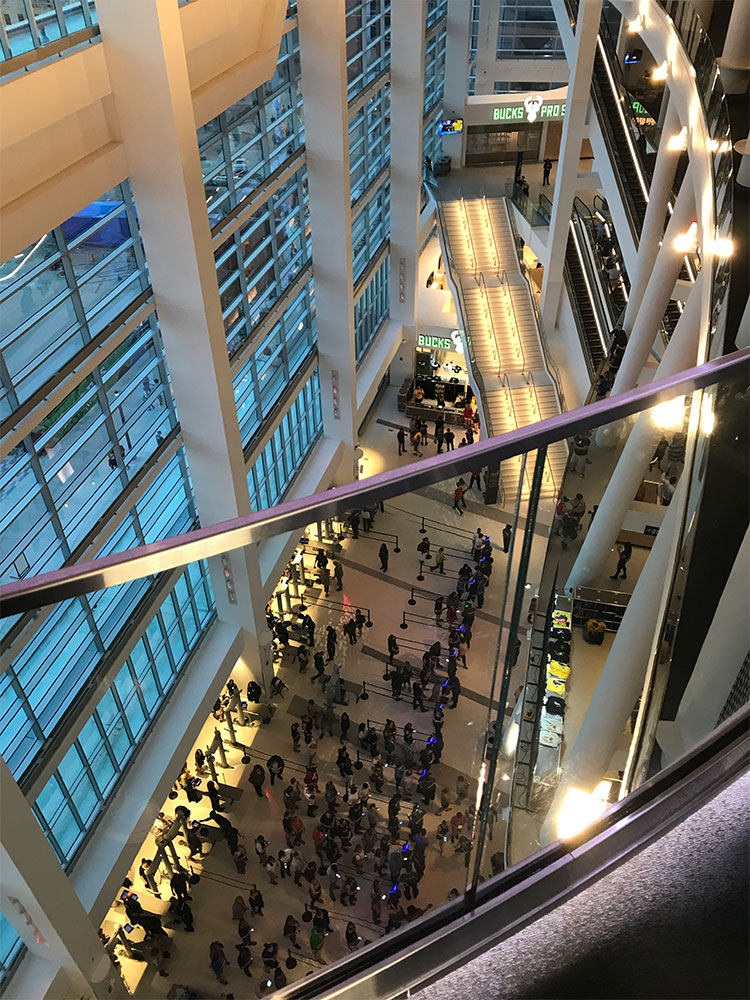 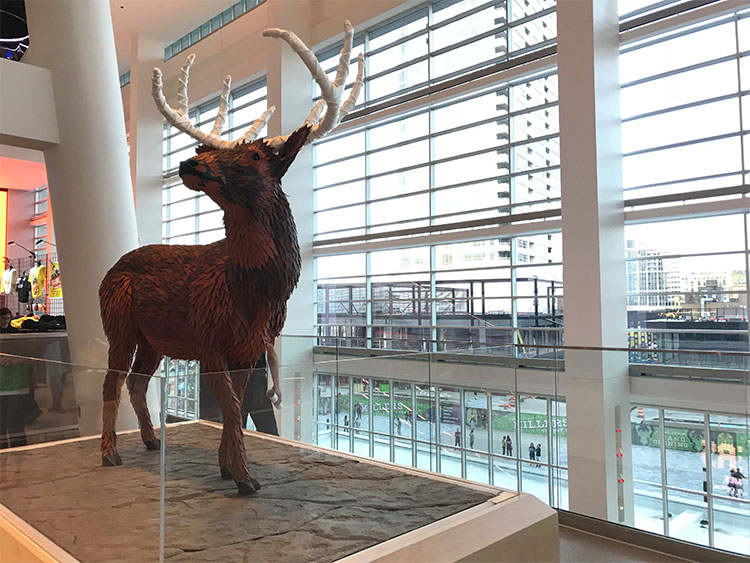 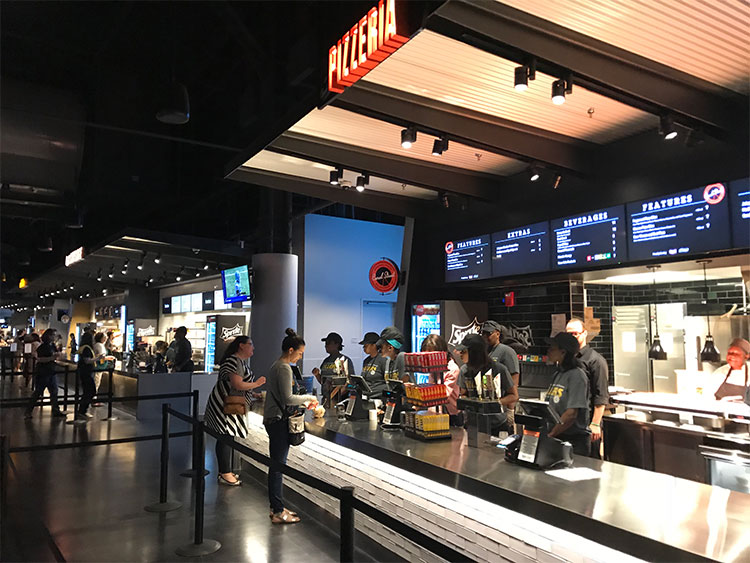 The highlights of the arena include the upper-level Panorama Club, oodles of “social spaces” that look out over the bowl, and a balcony that looks out over the city. The Panorama Club is a large carpeted lounge that gives off a distinct “cool hotel/casino lobby” vibe. The “social spaces” are open little areas spread throughout the arena where you can hang out and half-watch the game or show. (Many were curtained off when The Killers began.) Finally, the balcony is a balcony that looks east over downtown. “Wow!” everyone will say for the next five years when they walk out on the thing.

Also, are you used to the name yet? “Fiserv Forum.” We are. 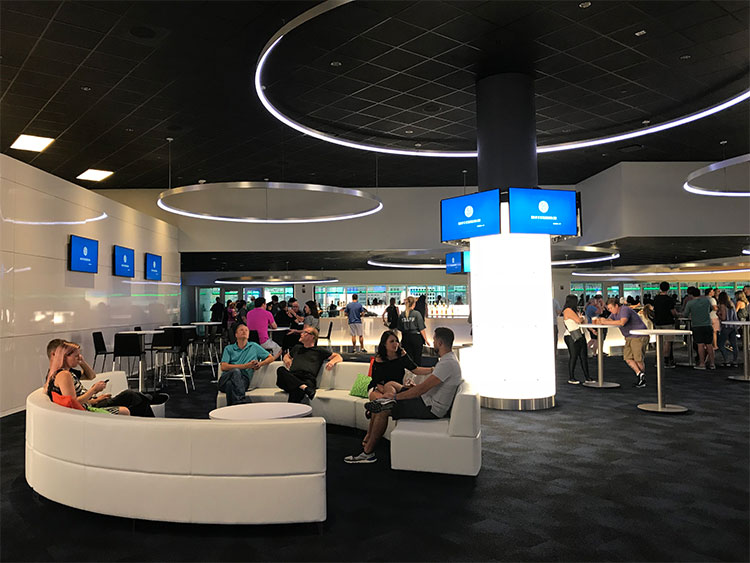 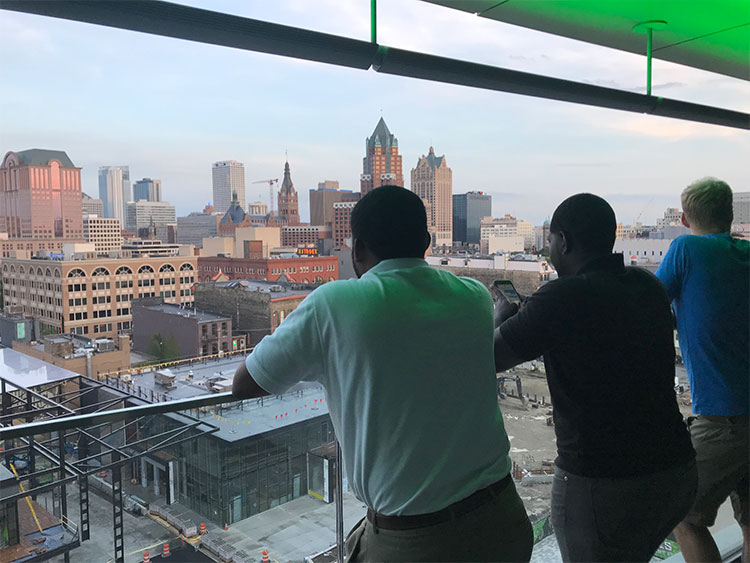 Now for The Killers. They were good! The Las Vegas band delivered everything you’d want from an arena rock show in 2018: big hits, big video screens, lights, lasers, confetti, winking sex appeal, a replica Milwaukee water tower for some reason, and a “random audience member” who was called on stage to play bass on “For Reasons Unknown.” Flowers, all blinding veneers and outfits from the Siegfried & Roy collection, was an appropriately effective and cheesy frontman as he led the packed Forum in “WHOA-OH” chants every 14 seconds. The band opened with “Mr. Brightside,” a song that, even after almost 15 years (!), is still great.

Oh yeah: The Killers’ set was preceded by that Alice Cooper/Milwaukee scene from Wayne’s World, except Alice Cooper recorded a new part where he said he “certainly wasn’t going to miss the grand opening of the Wisconsin Entertainment and Sports Center.” Apparently, this new bit was filmed before July 26. 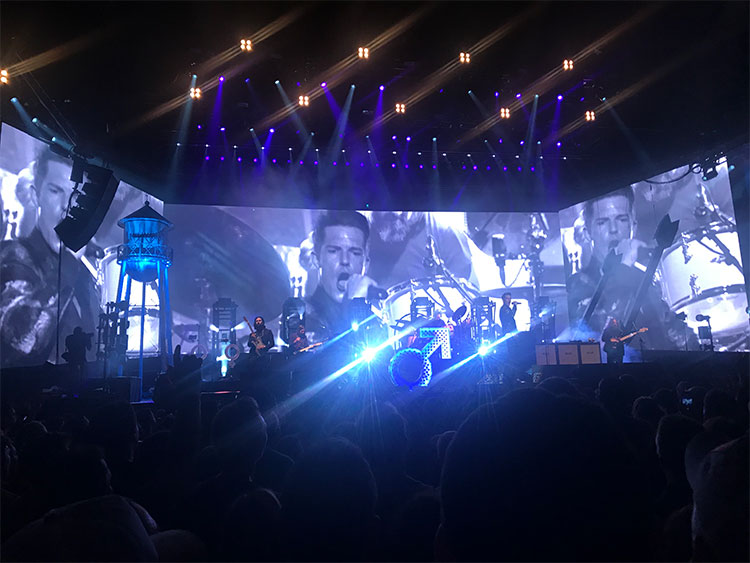 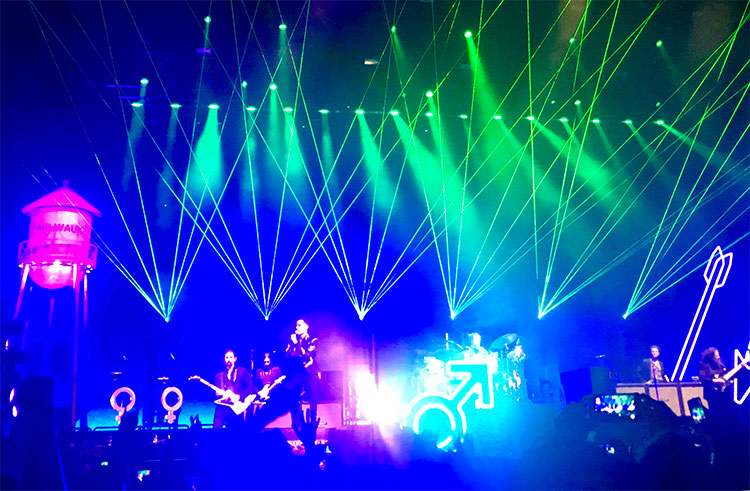 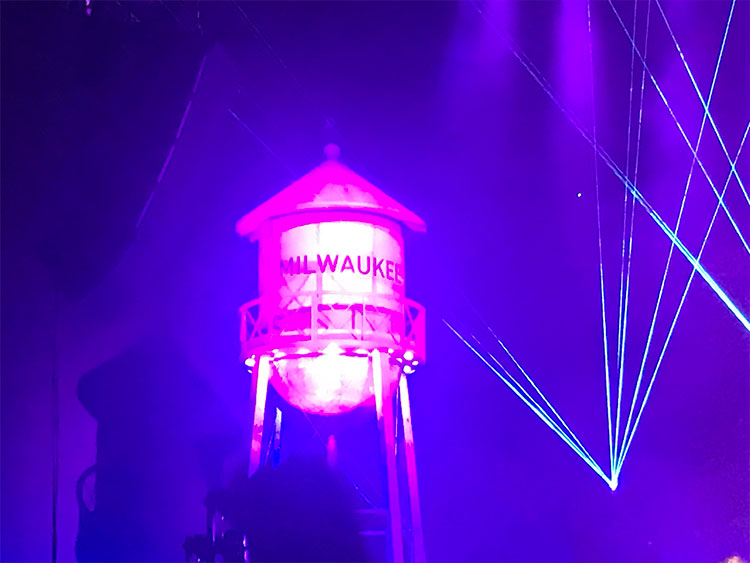 And finally, the Violent Femmes. They were great! The group was famously “discovered” busking outside the Oriental Theatre back in 1981; now 37 years later, here they were opening the city’s new basketball arena. Certain circles may roll their eyes when the Femmes (and only the Femmes) are mentioned as a “Milwaukee band,” but damn if they still aren’t a feather in the city’s cap.

The Femmes played what you’d expect: “Blister In The Sun,” “Kiss Off,” “American Music,” “Gone Daddy Gone,” “Add It Up.” But they also pulled out some deeper cuts like “Gimme The Car” and “I Held Her In My Arms” (both requested by The Killers, according to Femmes frontman Gordon Gano). Sure, Gano and bassist Brian Ritchie haven’t lived in Milwaukee in decades (only founding drummer Victor DeLorenzo, who left the band in 2013, still lives and makes music here), but what the hell. The Femmes are forever great, forever weird, and forever ours. Never take for granted that Milwaukee christened its new basketball arena with a band that uses a Coleman grill for a drum and plays a goofy hoedown called “Jesus Walking On The Water.” 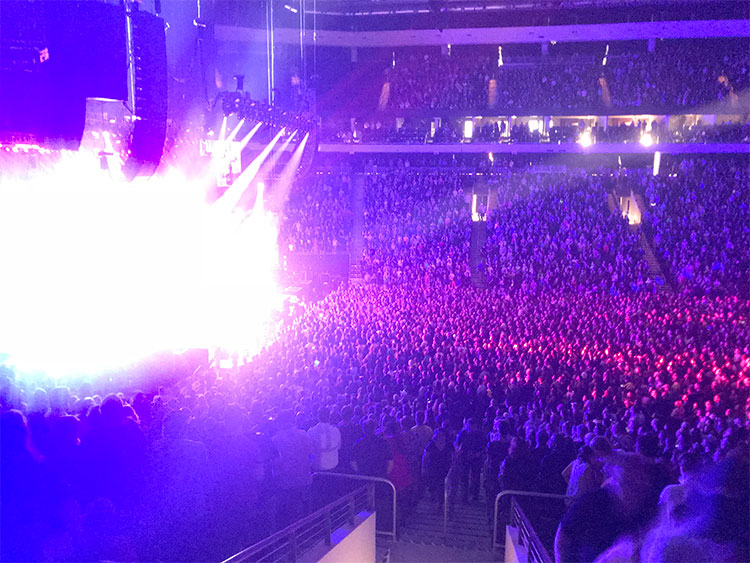 Oh yeah, in case you were wondering: the sound was great on the floor, in the seats, and pretty much everywhere else. Fiserv Forum sounds good!

Some dude behind us on the floor: “It smells like hotel soap in here, doesn’t it?”

Another dude behind us on the floor: “I’ve got 10,000 chicken breasts in my freezer, bro!”

A woman in front of us FaceTiming The Killers’ set for her popsicle-eating mom: 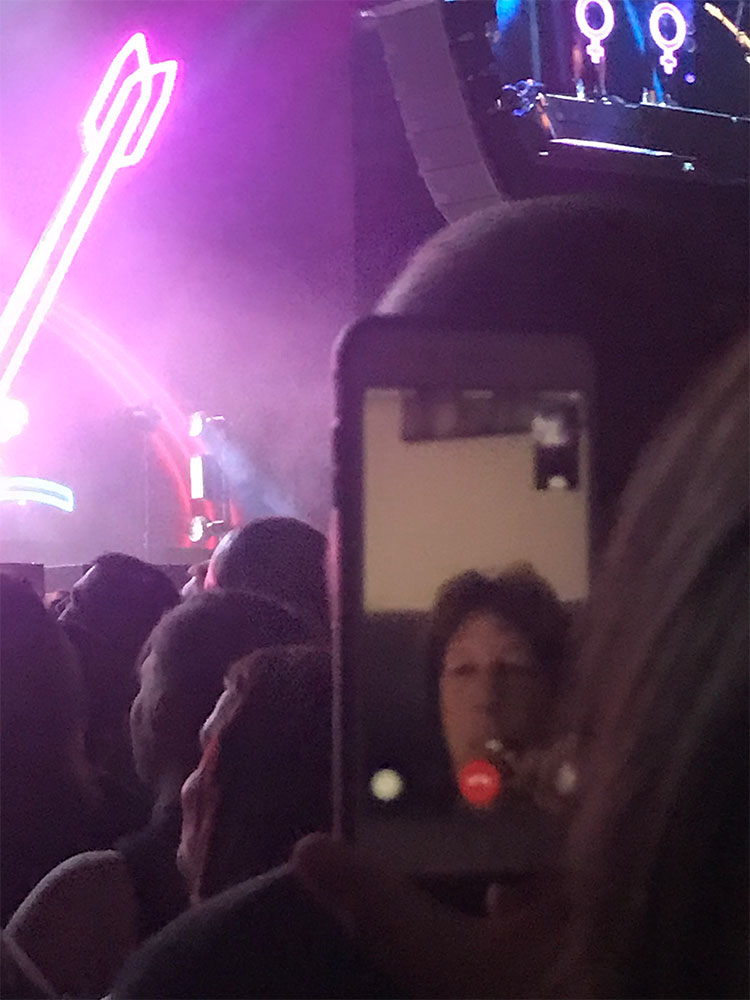