Before we begin, let’s get all the Charly Bliss talking points out of the way. Cool? Cool. The Brooklyn power-pop/alt-rockers have been around since 2014, but they sound like they’re straight out of 1994. The group’s 2017 debut album, Guppy, is a dead ringer for classic ’90s albums by classic ’90s bands like Veruca Salt, Letters To Cleo, and Weezer. Frontwoman Eva Hendricks has said her dad’s favorite song is Hanson’s 1997 banger “MMMBop,” so go ahead and feel old. Also, yeah, the ’90s.

Now that that’s out of the way, let’s get to the good stuff: Monday night at The Back Room @ Colectivo, Charly Bliss put on a wonderfully energetic, impossibly peppy show that was saddled with none of the ’90s-indebted talking points listed above. This was simply a terrific show from a terrific band working at the top of its game. Was there a Cyndi Lauper cover? Yes. Did the night end with Len’s “Steal My Sunshine”? Go ahead and feel old again. 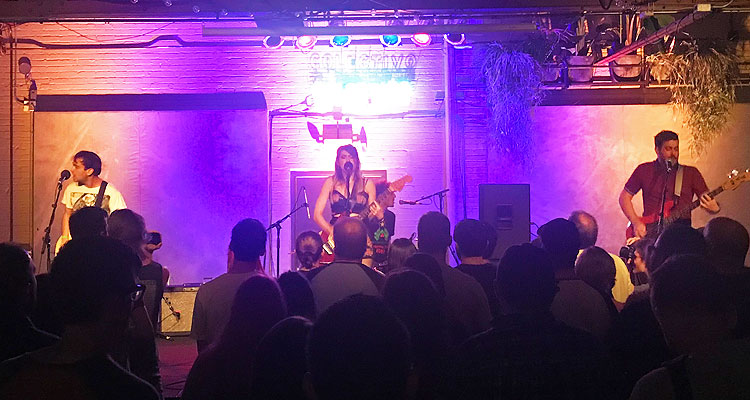 “I can’t count on myself to catch that,” Hendricks said at one point as a fan offered to toss her a bag of cheese curds. (A quick shout-out to Mars Cheese Castle followed.) It was one of the few bits of extended banter in an ebullient one-hour set, which found Charly Bliss bouncing from one song to the other and Hendricks literally bouncing around the stage. Opener “Westermarck” quickly gave way to “Scare U” (a.k.a. the “all I eat is bread and cheese” song), which in turn gave way to “Urge To Purge.” Guppy highlights like “Glitter” and “Black Hole” (a.k.a. the “she’s got her toe in the cornhole” song) made their expected appearances. All throughout, Hendricks’ voice was strong and piercing, the kind of instrument that hardly needs amplification. (Few can pull off Cyndi Lauper’s “All Through The Night”; Hendricks can and did.) The band behind her (including drummer/brother Sam Hendricks) was tight and focused, unencumbered by any “gotta sound like the ’90s!” expectations. A nostalgia act Charly Bliss is not.

Milwaukee’s mighty Tigernite served as the show’s last-minute opener. What can you say about Tigernite at this point? Only that the glam-rock band remains great, that this year’s Sublunary is one of the best Milwaukee albums of the year, and that the group should absolutely not be taken for granted. Tigernite plays a ton of shows, and none are inessential.

Another standout of the night: The Back Room @ Colecitvo. The cozy East Side space has become a low-key gem of the Milwaukee music scene over the past few years, and it serves as a reminder of the days when the surrounding neighborhood had more live venues and less poke-cat-ramen joints. Monday night, all you had to do was squint and soak in the fuzzed-out guitars and you were suddenly back at The Globe East circa 1998. Oh, the ’90s again.