As long as articles about limited-edition fast food items serve as a means of temporarily distracting us from the pain and disappointment of this nightmarish ordeal we so generously call “existence,” we’ll keep writing them. When Milwaukee was among a select few U.S. cities that were able to try Taco Bell’s “Chocoladilla” before it was phased out (because it’s very, very bad), we were there. When Arby’s released its surprisingly good Venison Sandwich for one day only last fall, we were there. When Starbucks mixed a bunch of sugary substances together for its gut-busting Zombie Frappuccino, we were also there. And when White Castle became the first fast food chain to offer the Impossible Burger, you know were drove down to Kenosha to try it.

So when news broke that Sonic Drive-In would be getting in on the limited-time menu gimmick by releasing its Pickle Juice Slush, Milwaukee Record was prepared to line up to try this intriguing beverage when it debuted this morning. As it turns out, there wasn’t a line to try a cold artificial pickle juice concoction at 8 a.m. on a brisk Monday. We were told by someone on staff that we were the first customers in Milwaukee to try it, at least at the Miller Park Way Sonic location (one of just two left in the region).

We were able to get a large Pickle Juice Slush for $2.55. Within moments of ordering (again, nobody was there), we were handed a Styrofoam vessel containing a cool, light green slurry of ice, sugar, and chemicals. So how did it taste? At first sip, we thought we’d received the wrong order. It had an unmistakable citrus flavor, but that soon gave way to a jolt of vinegar that lingered and an underlying hint of cucumber. The most evident taste, however, is that of desperation. A fledgling fast food franchise sought to delay its impending extinction by convincing people to try a strange drink. We took the bait and wrote about it, and now you’re reading about it. Meanwhile, the world is falling apart around us and there’s very little any single person can do about it.

Anyway, Sonic Drive-In’s new Pickle Juice Slush is pretty good. Better than expected, but not something we’re itching to ever have again. 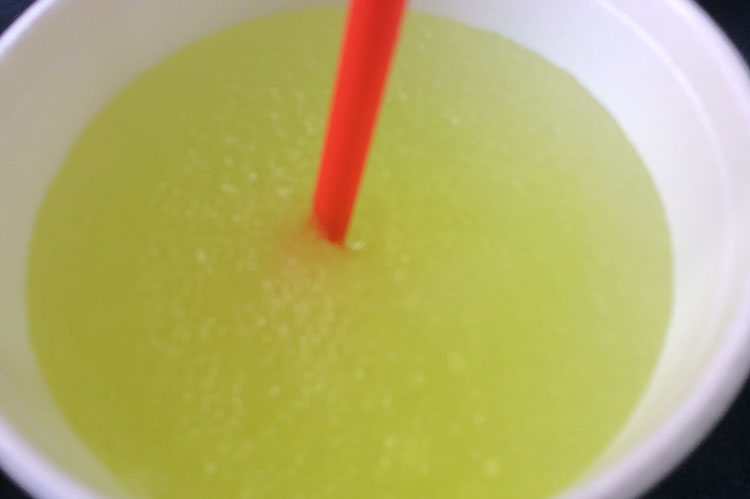