The 2006 evolution of Bayshore from “mall” into “town center” saw the monolithic, one-building format scrapped in exchange for an open-air makeshift village shopping experience. The change made way for giant new anchor stores, apartments for anyone who’d ever dreamed of literally living at a mall, and several high-end chains for anyone who wanted food that wasn’t being slung by a clown or a king. The end result so fully and effectively ensconced the shopper in convenience that the surrounding area’s relevance has seemed to fade away.

Among the establishments that share this harsh reality is Kawa (325 W. Silver Spring Dr., 414-249-5750), a Japanese restaurant across the street from the town center’s southern edge. The restaurant’s unassertive storefront is muted by the distraction of those bright Bayshore lights. We wanted to demystify Kawa and see for ourselves if the restaurant’s obscurity was well deserved or, indeed, the unfortunate byproduct of its proximity to a cacophony of culinary competition.

The space: The night and day difference between Kawa’s interior and exterior is almost humorous. The outside says “where grandpas get their sushi on,” but on the inside, diners are whisked away to what is effectively an early 2000’s hair salon that switched focus midway through construction and decided to be a restaurant and sushi bar. The polished interior is replete with shiny tiles, marble, and black leather chairs. Even the ceiling has these pieces of inexplicable black plastic in the shape of spirals adorning it. Sure, the decor toes the line between classy and tacky, but the glossy and ultra-clean vibe and its implied maintenance do show the establishment gives a shit about keeping up appearances.

Appropriately enough for a Tucked Away piece, our five-top walked into an otherwise empty restaurant. This didn’t stop us from receiving enthusiastic and solid service from beginning to end. On top of being knowledgeable and prompt, our affable server was also quick with a joke. Even with Kawa eventually filling up a bit, our aggressive ordering was paced well and we were never left to twiddle our thumbs wondering the whereabouts of our server. 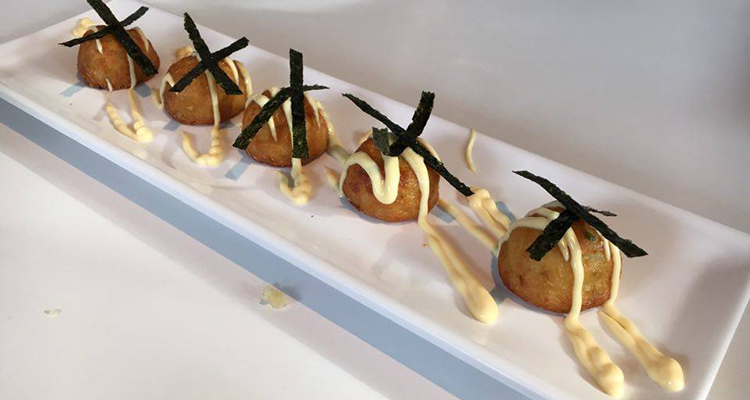 The food: The menu at Kawa is extensive enough that selecting a cohesive meal requires some perusal. Luckily for the diner, the restaurant features a decent and extremely reasonable drink list that can sate their thirst as they browse the entrees. Our table capitalized on various $4 Lakefront bottles and a $12 bottle of Ozeki Nigori, a delightfully creamy sake that pushes a Jackson at most restaurants. The voyage through our appetizers was an array of snacks that were as colorful as they were adorable. Juicy tender bites of beef negimaki harkened the feel of a summer picnic and a parade takoyaki followed harmoniously after, hitting the tastebuds with octopus and mayonnaise in such a way that is distinctly Japanese, but not without a hint of State Fair. Next to arrive was the chicken tempura, which did its part but little more; a token comfort dish, but not exactly the dish of our dreams. Highlighting the snack armada was the wasabi shumai. This morsel of pork stuffed deliciousness was remarkable, in that it harnessed only a gentle nudge of wasabi and not its usual punch to the palate—a difficult feat to accomplish. 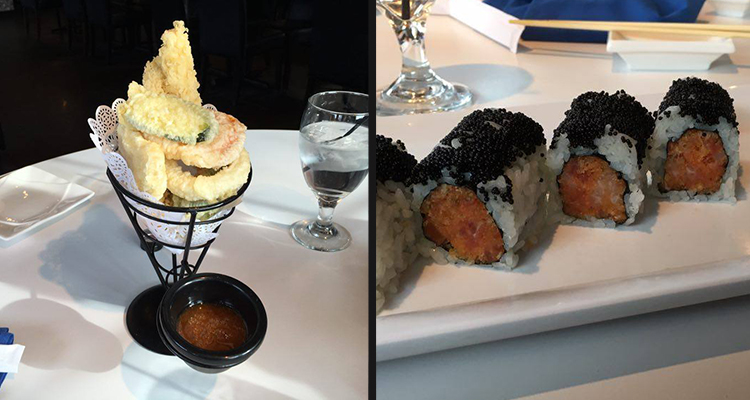 With all highs come lows, and while chops were shown, no bars were raised during the entree portion of our meal. This could be due in part to Kawa’s mammoth sushi selection that eventually forces the hand of the diner to pick whatever sounds good. In the case of our table, we distilled our selection down to some smoked salmon sushi and the spicy tuna with avocado and peanut-packed Crunch Dragon Roll. Not wanting to conform Kawa’s main course identity to sushi, we also tried a bowl of chicken soba. This dish was sadly lacking in seasoning, yet a little tableside soy sauce surgery helped bring it back to life.

The fact that the entrees didn’t blow us away isn’t a complaint. Bowls of $9 noodles are rarely if ever a revelatory experience. But with Kawa, the price point is such that it could very well float into the realm of abject repulsion, and it chooses not to. Ambitious and largely fantastic appetizers and service performing well above perfunctory levels made the overall experience a bargain, even if the main courses are only satisfactory.

The verdict: Next time you’re buying out Bayshore, don’t settle for some neutered simulacrum of ethnic cuisine—especially when a much better and more satisfying alternative is literally right across the street. No, Kawa isn’t likely to take you to transcendent and unparalleled levels of sublimity. But with warm service and fresh ingredients, it does deliver a damn solid experience at a more than fair price.