It finally happened. Months after revealing Spike TV “reality” series Bar Rescue was scouting locations in the city, then subsequently breaking the news of what bar would be featured on the show and when (twice), and subsequently being the first (and only?) publication to review both Rescue sites, Milwaukee Bar Rescue episode one of two was broadcast Sunday night. As self-anointed masters of this very specific, rapidly fleeting, and exceptionally stupid area of coverage, Milwaukee Record wasn’t going to miss the inaugural airing of the program’s televised rescue of Y-Not III for the world. So what if we already knew the outcome? Like we’d miss an opportunity to suck any remaining marrow from the bones of this emaciated beat. We’ve come this far, so why not see it through all the way? After all, we’ll soon be returning to a world where suggesting Jon Taffer was the basis for the computer generated Mucinex pitch-germ will have no local relevance. Is that a world I want to live in? I’ll have to get back to you on that. For now, though, I watched last night’s first Milwaukee-centric episode of Bar Rescue. Here are a dozen things I took away from it.

1. It’s literally impossible to shoot anything in Milwaukee and not show the Milwaukee Art Museum
Guess what landmark showed up roughly 30 seconds into the episode? You got it! Who can blame basic cable TV crews for capturing the Milwaukee Art Museum? It’s a great sight. I was shocked viewers didn’t also get the standard Milwaukee Public Market and Miller Park exteriors and a glimpse of the Bronze Fonz. The episode was actually off to a surprisingly tolerable beginning.

2. Jon Taffer knows everything about Milwaukee
You’d think as a guest in the city on business, Taffer would be squired around town and told about the city’s characteristics. Not a chance. Instead, Taffer drove Nick DePalma’s sister Monica around Milwaukee’s East Side while telling the Milwaukee native tidbits about her city. “This is a bar town,” Taffer told the bar owner in said town. “The lower East Side of Milwaukee is a young, progressive, really upcoming area.” He probably recommended a restaurant to her and made a sweet West Allis joke after he parked the car.

3. Bar Rescue is only as entertaining as the show’s most boring, level-headed bar owner
This was a bad episode, even by Bar Rescue standards. Sure, the half-assed ’70s concept and misrepresentation of Milwaukee each played small parts in the unsavory episode falling flat, but Y-Not III owner Nick DePalma is the person primarily to blame for this letdown. You see, this show thrives on detestable and stubborn know-it-all bar owners butting heads with the equally detestable and stubborn know-it-all host. It’s what makes the viewer feel morally and intellectually superior despite watching a formulaic fake reality show play out on Spike-fucking-TV. Nick DePalma didn’t play his part. Instead, he came off as a guy who simply lacked followthrough. Taffer attempted to vilify and rile the owner up in hopes of making things exciting, but DePalma just took it in stride and (rightfully) handed over the manager role to his cousin without any hesitation. When the owner is normal, reserved, and likable, the Bar Rescue brand suffers.

4. Y-Not is just the name of Y-Not III’s original owner spelled backwards. And Tony seems like a truly awesome dude
Speaking of owners, as obvious as this is to me now, I didn’t know the story behind the bar’s name was as simple as being the owner’s name reversed. I thought it was a pun in the vein of “My Office” downtown or St. Francis’ infamous “Liq-Er Box.” Anyway, onto Tony. No sarcasm intended, this guy is great. He’s a kind and supportive father, he didn’t take shit from Taffs, and when he noticed the lame-ass “Free Mustache Rides” wall decoration, he said, “Free mustache rides? They cost a nickel.” Tony DePalma: a businessman through and through. More than anything, this episode made me want to go to Y-Not II more often just to support Tony.

5. This was all just a fucking Smirnoff commercial. You know that, right?
It started innocently enough. Approximately seven minutes into the episode, a customer asked for a Smirnoff with two limes and was told that Y-Not (similar to likely dozens if not hundreds of bars in Milwaukee) did not carry Smirnoff. Disgusted, Taffer in his surveillance SUV said, “Smirnoff is one of the most popular brands in America! It’s embarrassing.” Three minutes later, a voiceover read, “Bar Rescue is brought to you by Smirnoff.” It only got worse from there. Award-winning mixologist—2014 San Diego Speed Rack Competition, baby!—Mia Mastroia was brought in and was quick to tout what she called “a premium spirit” any time she could. “You guys don’t have any Smirnoff. This is a missed opportunity,” she said with no recognition that she was pedaling the Bud Light of vodkas. Mastroia later revealed she and Jon wanted to offer customers “something a little more sophisticated, and Smirnoff is really the perfect line to do that,” and proceeded to push the latest bastard child in the Smirnoff family, Smirnoff Sours, without a hint of irony. Every flavored vodka-infused specialty shaker cocktail was set beside its corresponding Smirnoff bottle, and bottles were strategically and shamelessly placed in almost every frame (labels always out). Two more Smirnoff commercials aired before the hour show was through. Meanwhile, I hadn’t seen so much as a beer bottle on camera since 10 minutes in, and it seemed that rum, gin, and tequila had become obsolete, too. Don’t worry, whiskey was still available…if cinnamon-flavored Yukon Jack counts. By the time the unveiling came around, there were entire shelves stocked full of Smirnoff and nothing else.

6. I’m pretty sure Vic from Vic And Gab was at the unveiling
When the fateful night to unveil Nick’s House finally arrived, a hoard of production-crew-approved (and primarily female) patrons surrounded the entryway. One in the front looked strangely familiar. Tell me that’s not Victoriah “Vic” Banuelous from Vic And Gab on the right. If it’s not, she’s a dead ringer. I added the Smirnoff logo to the Vic Pic myself. I thought they could use “something a little more sophisticated.” 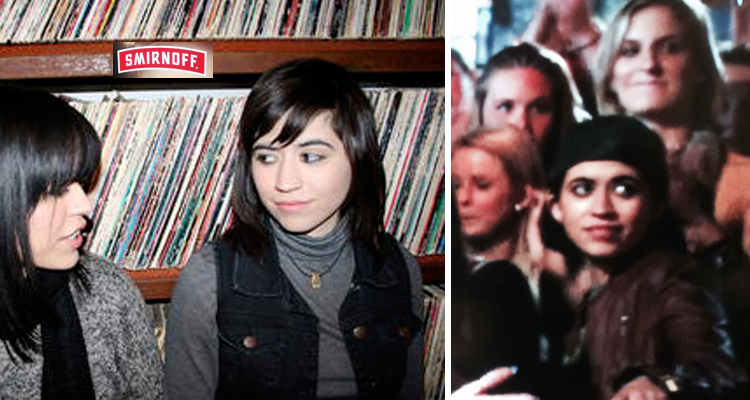 7. Bar Dice is apparently just a Wisconsin thing
Who knew? Evidently, the practice of playing bar dice and/or shaking for a shot doesn’t happen in every state. The show even flashed a caption about a law allowing Class B permit holders to distribute free alcohol samples, which is apparently a rarity in other parts of the country. What a state!

8. The “stress test” is absolutely staged
The “stress test” is a taxing ordeal in which far more customers than a bar is accustomed to serving flood the establishment as Taffer observes how the bar operates in stressful scenarios. Also, it couldn’t be any less authentic of an experience. If you watch this one in particular, a line of people two deep crowded every nook and cranny around the bar as the rest of the place was empty. It was just 40 people acting impatient and in need of drinks the entire time. The interior lights were on and (as an obvious way to avoid paying royalties to artists) there was no music playing in the bar. I also didn’t see a single customer in the brewing capital of the world holding a beer nor any non-vodka-based beverage.

9. A production assistant on the show has the worst musical taste on the planet
When Taffer was leading the staff around the renovated bar, he proudly showed off a TouchTunes-like digital jukebox that was pre-loaded with an unimaginably awful mix. I snapped a photograph of it. John Mayer is the best option of this Butt Rock And Roll Hall Of Fame ballot, which features a soul-decimating 24-percent Nickelback representation. As much as I want to blame the host for this, you know it had to be a misguided P.A. loading on his favorites. What, no Breaking Benjamin? 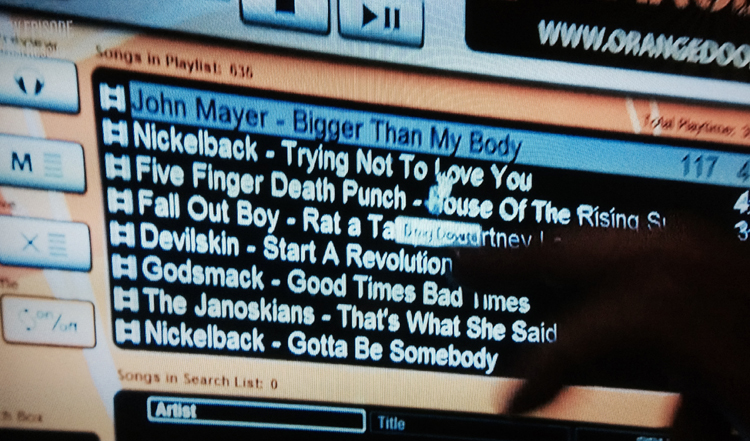 10. Taffer Tips save lives
When viewers weren’t being sold the cosmopolitan, high society, whipped-cream infused potato-water that is Smirnoff during the show itself, a slew of actual Smirnoff commercials were also shown. One of them was called “Taffer Tip” (which is trademarked, so don’t even try it!), and it found our noble host doling out valuable bits of wisdom, such as, “Don’t drink too much and drive.” More like “Life Rescue!” Thanks, JT.

11. Shaker cocktails are really, really unnecessary
Profit margins, upselling, unique branding, whatever. Call me crazy, but waiting three minutes as a bartender-turned-chemist shakes a metallic cup containing diluted 20-proof diabetes juice that costs $2 more than a standard rail drink just doesn’t seem quite worth it. That is, unless the person making it looks at you vacantly with a creepy artificial smile the entire time. 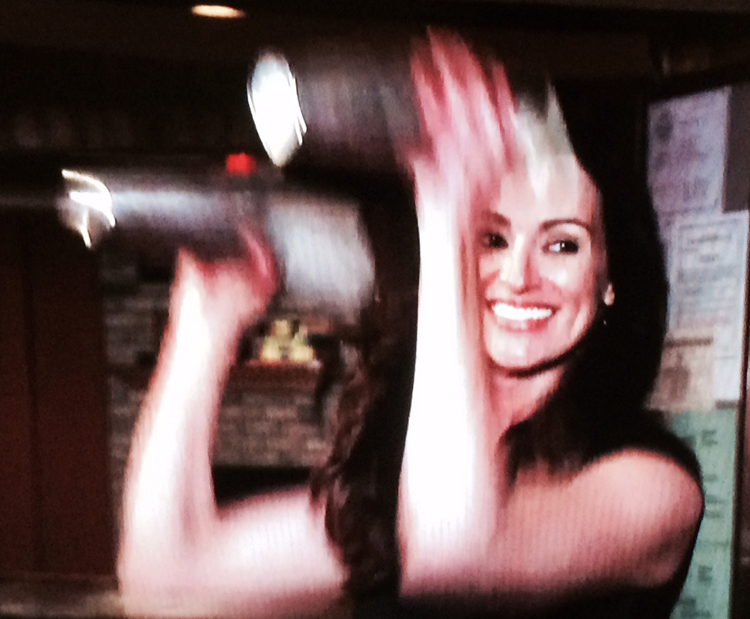 12. I wasted an hour of my life
It could be worse. At least I didn’t wait four hours just to get inside Nick’s House, only to not get on TV.