And so it’s come to this. Okay, so it’s not quite Woodward and Bernstein-level journalism. No, we didn’t compile an irrefutable report that a Heisman trophy candidate’s deceased girlfriend never existed, nor did we ever set foot on remotely tumultuous grounds to cover, you know, actually important news or whatever. But goddamn if we didn’t absolutely own this admittedly lame and altogether stupid Bar Rescue beat for Milwaukee. Quick recap: we told you they were scouting locations, announced the bar the show chose to rescue (twice), reviewed the bar the show chose (twice), and took in the first of two episodes Spike TV aired. Sunday night, the final Milwaukee-oriented episode of Bar Rescue quietly made its way to TV. It was so quiet, in fact, that I—the lone Milwaukee Record editor with access to cable—didn’t even notice it until I was preparing to fly out of town.

Though the anticipation of hearing a smarmy, discarded MadTV character aggressively gurgle “Smirnoff craft cocktails!” at maximum volume was killing me, I courageously waited until I returned to give the Packy’s Pub episode of Bar Rescue, (likely) our final sad chapter in this months-long basic cable-induced cringe, the time and attention it deserved. Before Milwaukee Record puts our Bar Rescue coverage to bed, here are some final takeaways.

1. It actually is possible to shoot something in Milwaukee and not show the Milwaukee Art Museum
Though the Nick’s House episode was quick to capture the low-hanging fruit that is one of the city’s most iconic and film-friendly landmarks, the Packy’s episode eschewed showing the architectural wonder altogether, instead opting for the BMO Harris Bradley Center, the entrance to the Pabst Brewery (note: this is the last beer name you’ll read in this piece that isn’t Guinness), City Hall, and the Pabst Theater.

2. Jon Taffer loves to present the possibility he won’t rescue a bar
Embarrassingly enough, I’ve watched 30-some episodes of Bar Rescue. Beyond the stinging realization that I’ve absolutely squandered more than an entire day of my existence watching someone I loathe scream advice I usually don’t agree with at people I’ll never meet in effort to improve places I’ll never visit, I’ve also come to learn Bar Rescue host Jon Taffer loves nothing more than to threaten taking his services elsewhere. In the entirety of the series, he’s only quit one episode…and he even stuck that one out far too long. Yet it didn’t stop him from screaming, “I WANT NOTHING TO DO WITH THIS PLACE!” and scurrying out in a huff early in the episode, then threatening to leave a second time 15 minutes later. Yeah, it’s disgusting that there were fruit flies in most of the liquor bottles, and it’s shitty that Packy was withholding paychecks from employees, but is either offense “immediately leave Milwaukee without footage to air between Adam Scott and Allison Brie Smirnoff commercials” bad? I didn’t think so. He’s like the boy who cried “Shut it down!”

3. Bar Rescue seriously needs to think about pixelating stuff instead of just using tape
Since it’s on TV and shit, Bar Rescue can’t use logos of brands, teams, or anything else unless they have permission to do so. Thus, it’s understandable for the show to obscure portions of employee and patron hats or clothing. But what isn’t as excusable is the show’s preferred method of doing so: tape. It absolutely hammers home how staged this show is when “undercover” footage of Packy’s bartender “Guppy” drinking copious amount of whiskey and full-on mooning patrons is captured—all while his polo shirt is heavily taped up. If there’s a day to turn down the shitty employee tendencies from 10 to two or three because you might be on TV, I’d personally pick the shift I’ve been told to slap half a fucking roll of electrical tape on my work shirt. The same tape-based lack of realism can be seen on customers, some of whom wait impatiently for contrived shaker cocktails while coincidentally donning clothing taped to bejesus. “[Whistles impatiently] I wonder where my delicious Guinness is. It’s been so long. Fortunately, it’s well worth the wait [winks into camera]. I’m a customer.” 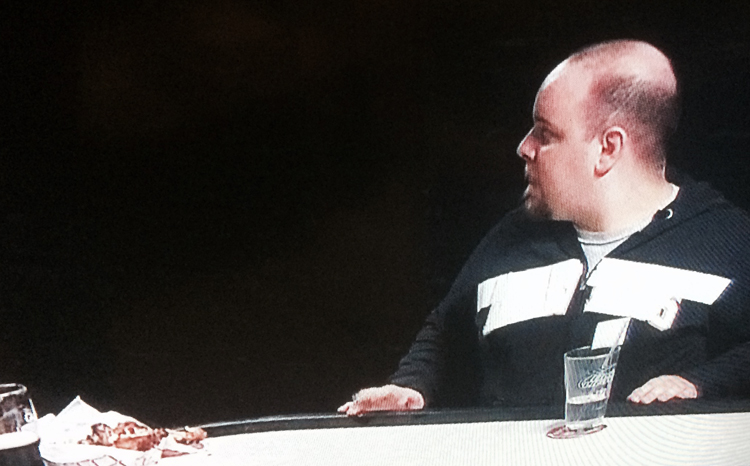 4. Taping a piece of paper to clothing, amazingly, isn’t a great method either
Another testament to the level of production and the attention editors put into piecing together a final product is the hat that owner Patrick “Packy” Campbell wore throughout the episode. The freshman film project level of continuity (and immense amount of splicing in out-of-order parts) Spike put into the episode is evident in Packy’s hat having paper covering the logo one moment, then not, than having it again on an almost minute-by-minute basis. I don’t know what CC stands for, but Bar Rescue probably owes them some money. Forget the tape and Post-Its already, Spike. Just get someone from COPS to blur everything out and at least hold onto whatever microscopic illusion of reality is left. If it’s good enough for pornographic Japanese game shows, it’s good enough for the bar fix-up show that airs before Entourage mini-marathons. 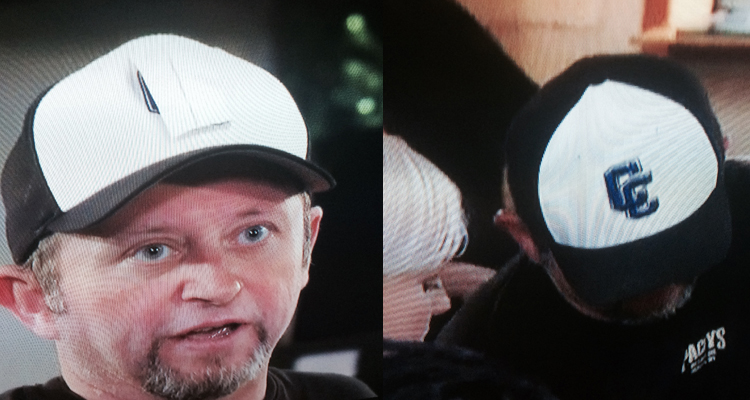 5. The interior of Campbell’s actually looks great
No matter how staged the events that led from Packy’s to Campbell’s might be, you can’t argue with the results. The redesign has transformed the dingy townie bar into a cozy and pristine place that’s way more fitting of the Irish motif. The exterior and new signage aren’t much of an upgrade, but the interior is significantly better than Packy’s was.

6. Meat science
If there’s one great part of this awful episode (which there is not), it’s the segment where the network pulls out all the stops and drops some science on us. Didn’t learn that alcohol cooks out of food when you were in middle school home economics class? Worry not. Let this crude graphic with meat, chemical bonds, and a purple thing help explain why eating stew with some Guinness in it won’t get you drunk (I mean, besides Guinness only having about 4.2 percent alcohol content). 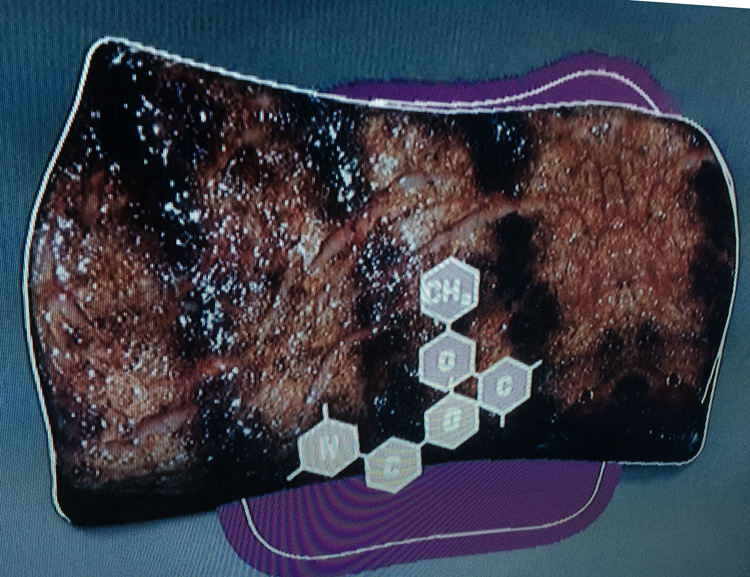 7. A good chef always lies about the origin of their recipes
As mentioned, Packy’s, er, Campbell’s expanded its menu beyond chicken wings to offer Irish stew, sausages, and other edibles. To help implement this, Taffer called upon Gavin Murphy, who has served as a private chef to celebrities like Tom Brady and James Cameron. In addition to teaching the staff some booze-infused recipes, Murphy also tells Packy, “Tell them ‘This is my mother’s dish from Ireland. I had this as a kid growing up.’ Make up a story. It doesn’t matter.” So yeah, everything is just an Americanized take on Irish basics that Avatar dude’s chef made up. Packy is quick to admit his mom is English.

8. The bartender with the beard is easily the best employee
Just like the Nick’s House episode, every employee on this particular episode ranges from being fine to downright likeable. Guppy drank a ton, but said some funny shit and has a cool Irish accent. Packy withheld employee checks (prompting Taffer’s third empty threat to leave), but redeemed himself by the end…and was really nice in person when I reviewed Campbell’s. Colleen and Summer seem cool too, but the guy with the beard is easily my favorite. He’s never yelled at, he has no lines, and isn’t even referenced by name. You know he’s doing something right. The unnamed brunette woman who says “It’s perfect” during the drink tutorial is a close second place.

9. This was all just a fucking Guinness and Bushmills commercial. You know that, right?
Last time it was Smirnoff that was the brand repeatedly thrust into our collective subconscious. This time around, Guinness and Bushmills were the Bar Rescue distributed products being shoved into the concept. Being an Irish-themed bar with an owner with actual Irish lineage, this went over MUCH more naturally and believably than the forced 1970s-themed vodka commercial that was Nick’s House. Still, the sponsorship interests are pretty clear when every sign/decoration is removed or taped over except those with Guinness on them, bottles not emblazoned with the Bushmills logo are turned backwards (except Smirnoff, for some crazy reason), all food and drink recipes contain one or both brands, and Taffer is forcing lines like, “You can’t have an Irish bar and not have Guinness. You can’t have an Irish bar and not have Bushmills.” Putting fucking Bushmills Irish Honey alone on the top shelf (above two other shelves with only Bushmills on them) and installing a Guinness tapper as the front door handle are just the icing on the cake.

10. “In the end, Irish pride is going to save the day.”
Those are the words of one Jon Taffer as he departs Milwaukee for exciting new places in need (Yuma, Arizona maybe?). Strangely, he leaves out the part about how being featured on a TV show also has a little to do with a once-ailing business gaining sudden momentum. Even if it took a staged reality show utterly sterilizing a pair of struggling bars to get it done, I have to admit that Milwaukee actually benefits from Bar Rescue’s brief local occupation. Was the process predictable, formulaic, and downright painful to watch? Absolutely. But two owners retain their businesses, employees take home more tips, the type of person who visits Milwaukee to see the Safe House and take the Miller Brewing tour has two more places to visit, and you read to the end of this post. Until an oily and hastily constructed android Jon Taffer comes to town in, like, 2024 or something, it’s time to “Shut it down” with this Bar Rescue shit. It’s been a hell of a ride.