Hollywood has spent the past decade perfecting the art of the “soft reboot.” Films like Star Wars: The Force Awakens, Star Trek, and Jurassic World all essentially function as reboots of their respective long-dormant series, but retain just enough elements of the original films to work as proper sequels, too. It’s a winning formula that tends to bring in hordes of new fans while keeping old fans happy, and usually ends with the destruction of yet another Death Star.

The same “soft reboot” approach has been applied to Milwaukee’s Jazz Estate, which recently reopened after an ownership change in 2015. Sporting a fresh, ever-so-updated look that blends seamlessly with, and enhances the original atmosphere, the long-running East Side jazz joint is back and better than ever. Similar to a section of drinks on its cocktail menu, it’s a resurrected classic.

Credit for the smooth transition goes to new owner John Dye, who also owns Bryant’s Cocktail Lounge. The changes Dye and his crew have made are subtle yet game changing: new flooring, new lighting, a new ceiling, an updated cocktail menu, and a sharply dressed staff. In general, the new Jazz Estate simply feels cleaner, much in the same way nearby Von Trier did after its overhaul earlier this decade.

Cocktails and drinks range from the aforementioned “resurrected classics” like Swamp Water Redux, The Duke, and Broken Time (all $10), to a trio of high-end high balls (all $9). Old Fashioneds ring in at $8 and come in two varieties: Bryant’s Old Fashioned (a.k.a. a Wisconsin Old Fashioned) and a Jazz Estate Old Fashioned. The latter is spot-on.

Happily, all the elements that made the Estate such a charming and unique spot since its opening in 1977 remain. The space is still dark, narrow, and easily crowded. The stage is still intimate and acoustically sound. The tables and booths in the elevated nook in the back of the club are still some of the best places on the East Side for a deliriously romantic and dimly lit night out.

The music remains the same, too, of course. Currently scheduled for Thursdays and Saturdays, live jazz continues to be the Estate’s bread and butter. On a recent Thursday night, Milwaukee’s Paul Silbergleit Trio delighted a near-capacity crowd. With its fresh-yet-faithful new aesthetic, it’s clear the Jazz Estate will be doing the same for years to come. 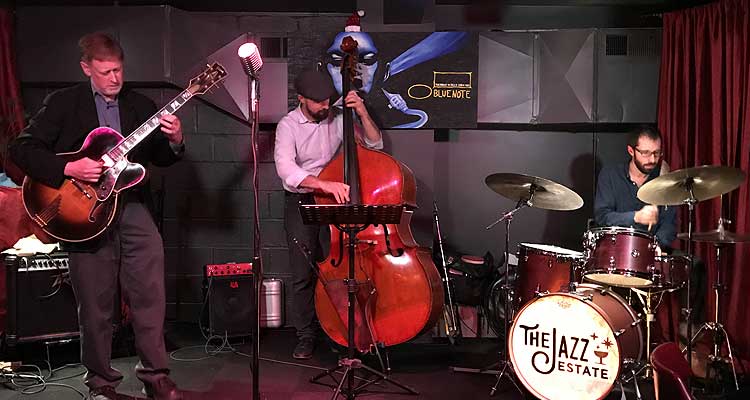