If you’ll forgive a personal story in this installment of Mandatory Milwaukee, I’d like to tell you about the time Pizza Shuttle (1827 N. Farwell Ave., 414-289-9993) saved my life.

I was 24 years old, living in a flood-prone East Side basement apartment with my girlfriend. This was 2002 or so. I spent my days being sporadically employed and typing my crappy thoughts into LiveJournal. I spent my nights playing the first Halo with my friends who would lug over their own Xboxes and big-ass TVs so we could get 16 players on that sucker. I wore turtlenecks and still had a landline. It was a Different Time.

Anyway, one night my girlfriend and I ordered pizza. (Even all these years later, the place we ordered from shall go unnamed.) We were told it would be a 45-minute wait. My girlfriend hopped in the shower. I hopped on the couch and watched Aqua Teen Hunger Force or whatever.

Twenty minutes later, the doorbell rang. I opened the door. Hey! It was the pizza guy! And I kind of knew him! Fun! The pizza guy in question (for the sake of this story, I’ll call him “Alonzo”) had dated an ex-girlfriend of mine a few years prior. He had since become one of those dudes who was just always around. Case in point: here he was on my doorstep, delivering me a pizza at 9 p.m.

Alonzo and I chatted for a bit. We were friendly but we certainly weren’t “friends,” so we made the usual friendly non-friends small talk. And that’s when he asked me a simple yet fateful question: “Wanna do some deliveries with me and get high?”

Now, the proper response to this question is: “Ha. No thanks. Did you remember the garlic bread?” But that was not my response. No, gentle reader, I decided to take this semi-random dude up on his semi-random offer. Not only that, I agreed to it in two seconds flat. “Sure,” I said, walking out the door and closing it behind me. Jump in the car of a pizza guy I kinda-sorta knew and get high? Why not? It was a Different Time.

Oh yeah, two crucial things: I neglected to announce my departure to my girlfriend, who was still in the shower. Also, my girlfriend and I didn’t own cell phones.

Before we go any further, I should mention that I’ve never been much of a smoker. I’ve done my fair share of illegal drugs—enjoyed some, gotten creeped out by others—but marijuana has always fallen in the “not for me” category. There’s something about the loss of control and the whole “warping of time” thing that doesn’t agree with me. Better to do a drug that heightens my senses instead of one that wraps my senses in 14 blankets and spins them around in a dark room. Plus, one quick hit and I’m usually high for about eight hours.

And, well, that’s what happened here. About 30 seconds into our illicit late-night delivery jaunt, Alonzo produced a pipe stuffed with weed. He gave it to me. I partook. I got really, really high, really, really fast. Yes, I know everyone has a “it was laced with something” story, but this shit was totally laced with something. My universe instantly dropped away. I lost all sense of where I was, who I was, and who I was with. My only cognizant thought was “Uh oh.”

The next five hours are a blur of lights, sounds, and increasingly frenzied impressions. Endless driving. Picking up someone else and driving some more. Waiting in the car while Alonzo went inside a series of houses that seemed to fall outside his pizza delivery jurisdiction. Alonzo screaming at me and telling me he was a pimp, and that I should call him if I ever needed anything. A gun in the glove compartment. A gun in Alonzo’s hand. More driving. More people. More smoking. More everything. In case you’re wondering why I’m calling the dude “Alonzo,” it’s because the whole thing felt like Training Day. Or that episode of Six Feet Under where David gets kidnapped. It was absolutely terrifying.

And then, the next thing I knew, I was sitting on the steps of my friendly neighborhood Pizza Shuttle, alone, in tears, out of my mind. I had (and still have) no idea how I ended up there. Alonzo, who didn’t work for Pizza Shuttle, was long gone. It was a little past 2 a.m. I remember approaching random customers and asking them if I could borrow their cell phones. I had to call my girlfriend. I had to call a cab. I had to get home. Everyone ignored me. I must have looked insane.

Finally, a Pizza Shuttle employee appeared. She gave me her phone and let me call my girlfriend. She called me a cab. (This woman, this Pizza Shuttle savior, remains my personal saint.) Twenty minutes later, I was home. I let myself in and immediately collapsed to the floor. I was a wreck. The fallout with my girlfriend—remember, I had essentially disappeared for five hours—is a story best left for another time, or not at all.

More than three decades into its existence, the Milwaukee pizza icon is about as Mandatory Milwaukee as they come. It’s a rock of the East Side, a pepperoni-piled pillar of the community. It’s practically a public utility. Long ago, it saved my life. One of these nights, it could save yours. Maybe it already has. 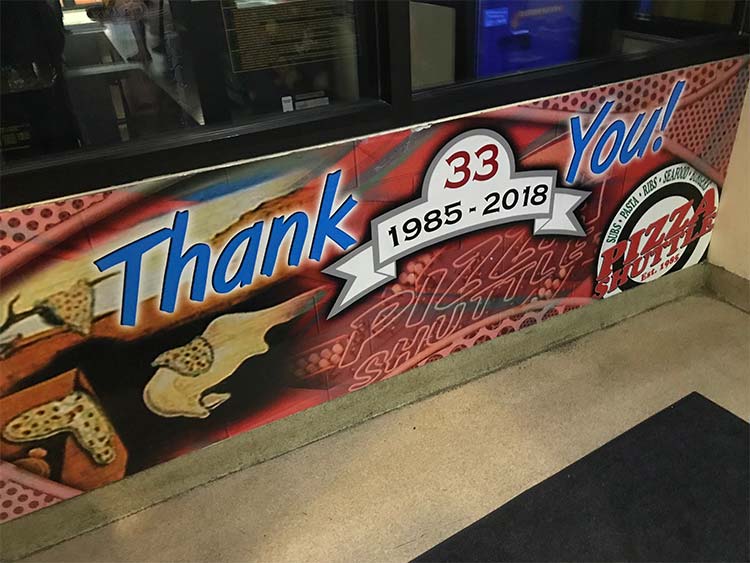