Here’s a fun social media experiment: Log on to ye olde Facebook, Instagram, or Snapchat; post a picture of yourself at Kopp’s Frozen Custard (any location will do); and watch your friends from Illinois lose their minds. “OH GOD I LOVE KOPP’S,” they’ll undoubtedly say, jealous that the iconic Milwaukee-area custard mecca reaches no farther south than Greenfield. Hell, you’ll probably see similar sentiments from your Milwaukee friends, venting their frustration that they’re not at Kopp’s right now.

Ah yes, Kopp’s, the self-proclaimed custard and jumbo burger “heaven,” and the Milwaukee Record-proclaimed “Cadillac of frozen desserts.” Home to the beloved “Flavor of the Day,” the trusted “Flavor Forecast,” and enough stainless steel and paper hats to reach to the moon and back. Its three locations (Greenfield, Brookfield, Glendale) are gleaming summer beacons of goodness, simplicity, and big-ass burgers. Its old-fashioned trappings may be nostalgic signposts for the “good old days” (don’t say “happy” days), but take one spoonful of Kopp’s signature custard, or one bite of those big-ass butter burgers, and you’ll realize the good old days are not only yours and mine, they’re here and now. 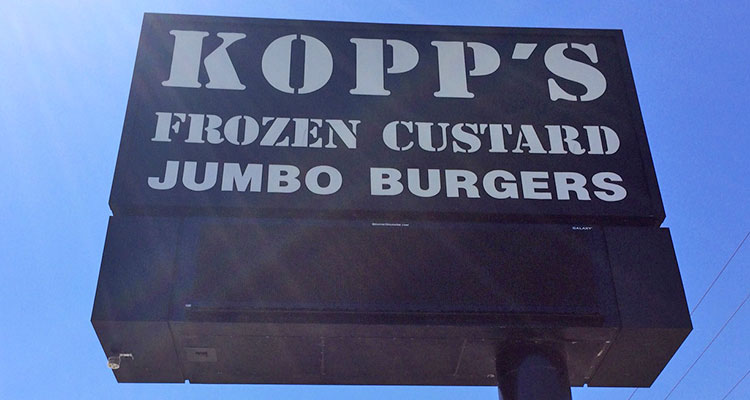 Milwaukee’s singular obsession with frozen custard is well documented. Only in Milwaukee, a city stuffed to the gills with custard joints, can people choose sides in the friendly frozen war. If Kopp’s isn’t your place, maybe you’re loyal to Leon’s. Maybe Northpoint gets your love. On the road and far away from the metro Milwaukee area? You could do a lot worse than Culver’s.

And yet the sinfully tasty treat didn’t originate here. New York’s Coney Island in 1919 represents frozen custard patient zero, with Archie and Elton Kohr selling a whopping 18,460 cones of the stuff in their first weekend in business alone. From there, the egg-yolk-heavy concoction (don’t call it ice cream!) was let loose upon the country via the 1933 World’s Fair in Chicago.

Decades upon decades later, Milwaukee is the unofficial frozen custard capital of the world. But why? Who knows, though in a recent CBS Sunday Morning segment, Bob Uecker shares his personal Uecker-tastic theory:

“You don’t get custard on the coasts like you get in the Midwest. You can’t. Because the cows in California are too hot. Cows in the Midwest, in the winter, shake and shiver. That’s what gives the custard the air. Your first scoop, you like it.”

Indeed, Bob. Indeed. But anyway, back to Kopp’s. Elsa Kopp, a German immigrant, opened her first frozen custard stand in 1951, at 6005 W. Appleton Ave. (now the site of the recently closed Junior’s Custard). Helping her was another custard icon, Leon Schneider, owner of Leon’s Frozen Custard. Elsa’s business was intended to bolster the family income after her husband developed Parkinson’s disease. It paid off: within a decade, Kopp’s was a success. Wikipedia has this to share:

Initially [Elsa Kopp] mixed chocolate and vanilla, in the process committing what many in the early frozen custard community considered a heretical act. After this, Kopp’s began offering increasingly diverse concoctions which became their well known “flavor of the day” menu option. Kopp’s offers two unique flavors every day and a featured shake and sundae of the month. The featured flavors are often related to events for that day or month. Flavors of the day are developed by employees and approved by Karl Kopp.

Elsa’s son Karl took over operation of Kopp’s and moved it to Greenfield in the mid ’60s. A second location, owned and operated by former employee Dick McGuire, soon opened in Brookfield (the location is now owned by McGuire’s son). Karl Kopp, meanwhile, eventually opened the Glendale location. Elsa Kopp continued to work until 1998; she died in 2003 at the age of 91. Also, in 2012, Karl Kopp proposed legalizing marijuana in Wisconsin. 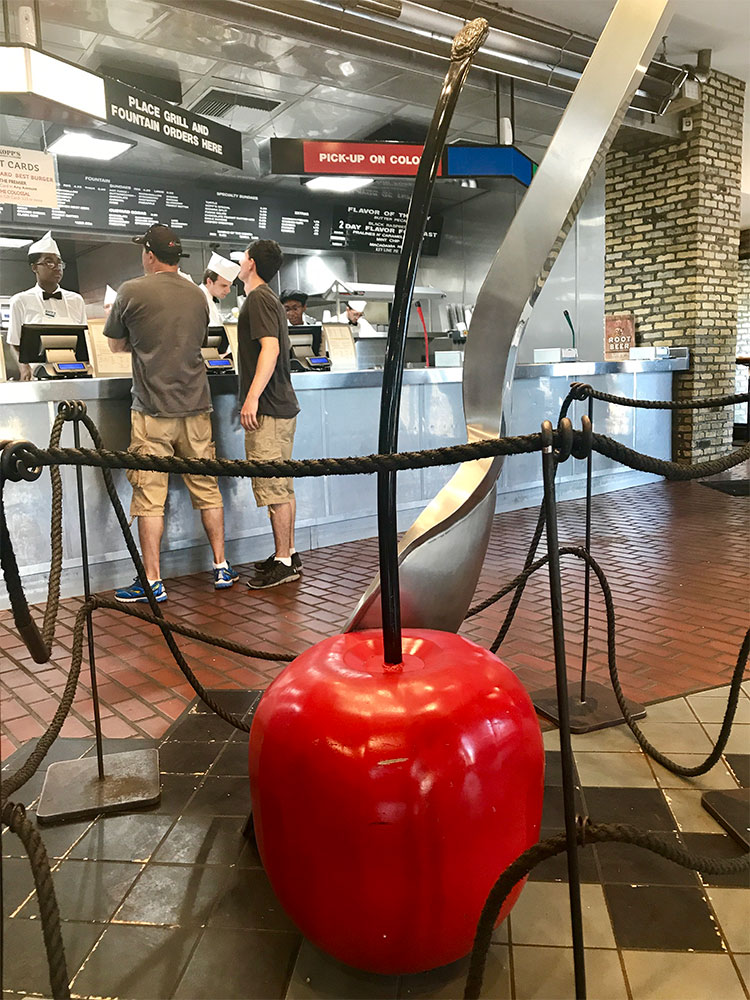 So let’s talk about the many pleasures of Kopp’s. There’s the Flavor of the Day, of course, covering everything from Grasshopper Fudge and German Apple Streusel to Cookies ‘N Cream and Chicken Dinner, all helpfully laid out via the Flavor Forecast. There’s the sock-hop ’50s vibe, complete with paper hat-clad employees and outdoor seating (sadly, carhops hung up their roller skates long ago). There’s the clientele, which covers nearly every Milwaukee demographic, ensuring suburban soccer teams out for post-game treats are rubbing shoulders with date-night adults and buttoned-down businesspeople alike. In Glendale, there’s the lineup of cows. 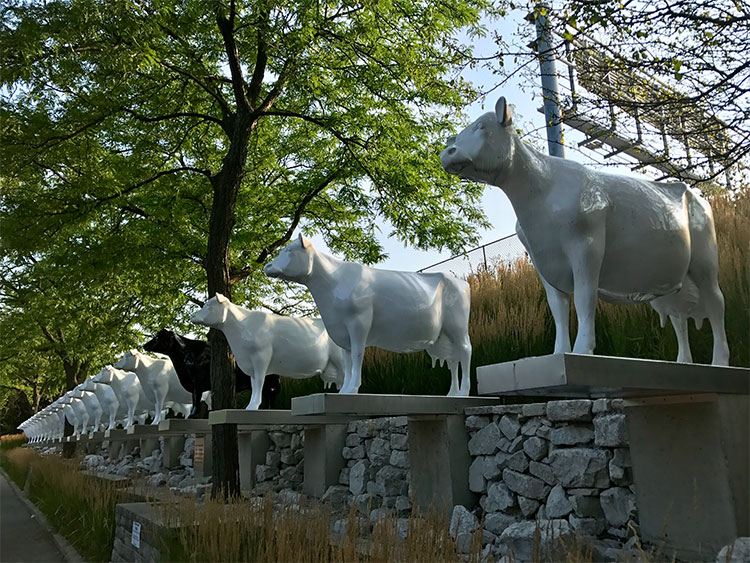 And then there’s the food. “Jumbo” is the right word to describe Kopp’s burgers—these suckers are almost six inches across and feel like they weigh as much as a small pet. They’re incredible. Paired with some fries and an after-dinner cone and you’ve got summer in Milwaukee rolled up into one meal. Also, Kopp’s is one of those places where the Coke just tastes better. And a place where then-Vice President Joe Biden got a little testy with a manager in 2010.

Is Kopp’s the oldest surviving frozen custard stand in Milwaukee? No (that distinction goes to Gilles). Is it the best frozen custard in the city? That’s a matter of opinion. But whatever: Kopp’s has been around for more than 60 years. It will likely be around for 60 more. It is an institution. It is divine. It is the Midwest. It is ours. 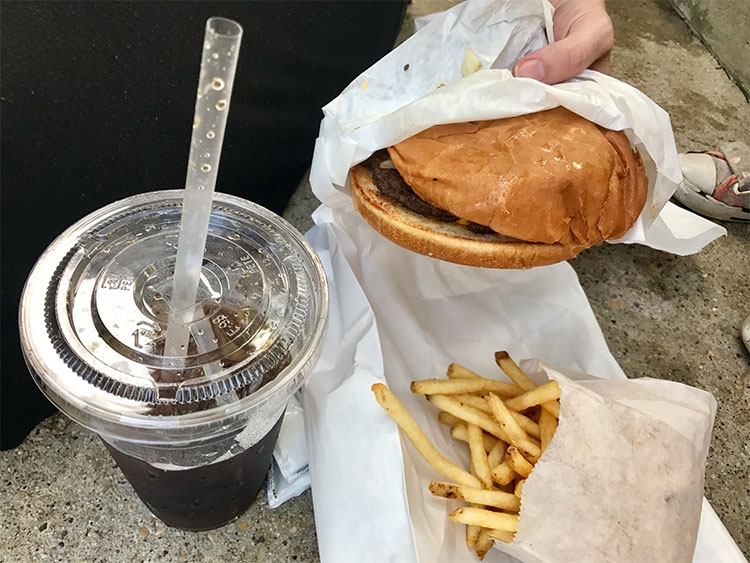