At a time in which people entrust their dining dollar on the opinions of strangers with Yelp accounts, Google usernames, or posting privileges on websites operated out of their mother’s basement, the fate of a local bar or restaurant is more reliant on customer feedback than ever before. The “word of mouth” concept has spread to countless platforms, giving a prospective diner or drinker a wealth of information on a business, its products, and the service one can expect long before they decide to step through the door. Businesses are also held more accountable for their output than ever before, which will (ideally) ensure better service and consistency from customer to customer.

As helpful and informative as these review tools can be, it can be a bit alarming to realize a reputation sometimes built through decades of hard work can be quickly dismantled by an angry or malicious person with a computer, an axe to grind, and too much time on their hands. Most entrepreneurs have no choice but to accept the shifting review paradigm, keep doing the best they can, and hope they’re not subjected to the ire of the ever-angry beast that is the Internet. Maharaja decided to fight back.

Since 1997, long before everyone and their mother had countless mediums to be self-annointed food critics, Maharaja has thrived on Milwaukee’s lower east side. The Indian establishment’s longevity surely has at least something to do with its food quality and beloved lunch buffet, not to mention its high-traffic Farwell Avenue location and (until recently) a lack of local competition. Another irrefutable component behind Maharaja’s success is the passion of its owners, a passion that extends to threatening Yelpers with litigation and suggesting competitors are leaving “fraudulent” reviews.

Anyone who has skimmed Maharaja’s page on Yelp, Trip Advisor, or has seen Google reviews has surely happened upon a less-than-positive review, immediately followed by “Flagrant Review” and a lengthy deconstruction of every unsavory claim made by the reviewer. While Maharaja’s Yelp! rating current stands at a respectable 3.8 stars (out of five), accounts claiming to belong to ownership routinely go on the warpath against unsatisfied diners, undressing their reviews and explaining why their opinions are wrong, demanding proof of visit, and seeking evidence of food poisoning from a “qualified” physician. The accounts have also suggested particularly harsh reviews were written by competitors. Damn! Don’t Indian restaurants typically shy away from beef? 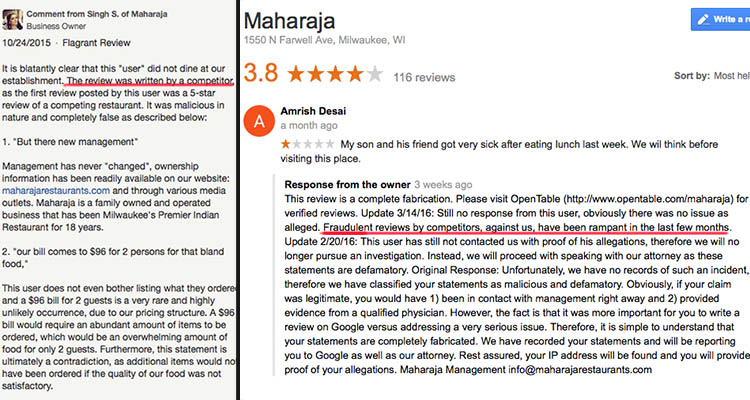 The restaurant’s Twitter account is also known to block negative reviewers with Sheriff David Clarke-like speed. Last month, we sent an email to the address pasted in every thorough response and have yet to receive a reply. We’d go to Maharaja to get comment from management, but we have too many bad memories from our last visit back in November. The service was iffy, especially for a week night. Also, the chicken in our Tikka Masala was kind of dry: 2.5 stars. We’ll stick to Bombay Sweets, which has great food for a fraction of the price.

Our review aside, it’s encouraging to see a business take an active approach to uphold its long and storied reputation at a time when customers are largely in command of a restaurant’s identity. Skim the reviews and give Maharaja a try if you haven’t already. Just pray you like it before leaving a review.