It seems silly and even a little arrogant in 2016 to be writing up a First Impression for an institution that predates the first World War, but the newest iteration of Karl Ratzsch’s, and how it came to be, deserves a look. In an era of dining that has seen a modernized—and not always graceful—resurrection of supper clubs and a love of small- to moderate-sized dishes portioned and plated to share, where exactly does the ambitiously hearty and heavy cuisine of Germany fit in? What exactly does c.1880 chef-turned-Ratzsch owner Thomas Hauck have up his sleeve that could bring this erstwhile fare into the realm of contemporary gastronomy? We popped in to Karl Ratzsch Restaurant (320 E. Mason St., 414-276-2720) a few weeks into Hauck’s administration to find out.

The space: Any worry that the Karl Ratzsch’s remodel might have resulted in a desperate and tone-deaf swing at hipness is quashed immediately upon entry. In fact, spare some lighting tweaks, new tables, and beer steins set up for ambiance, not a whole lot has changed. The antler chandeliers still line the main hall separating the regular dining room from the private rooms, and every inch of every wall is filled with omnipresent but never-tacky tokens of Germanic heritage. The addition of a first-floor bathroom is new, giving both floors their own facilities. Based on observation alone, it would seem that much of Karl Ratzsch’s front of house crew has remained intact through the transition as well. The staff seemed savvy and fluid in their navigation of the restaurant, but weren’t without their minor stumbles. Those minute missteps (rushed service and one forgotten beer) were easily forgivable, especially when considering we were there on a bustling Friday night.

The food: Browsing Karl Ratzsch’s menu, with its sheer vastness and unfamiliarity, might throw one into a panicked tizzy. Of course “wurst” means sausage, but what the fuck do “bock” and “knack” signify? What the hell is an “obatzda”? Should these words send you into a tailspin destined to see you crash landing into the familiar field of bratwurst and pretzels, don’t be bummed. They have you covered on that front, but it might pay off for you to exhale and check out the parentheticals on the menu. 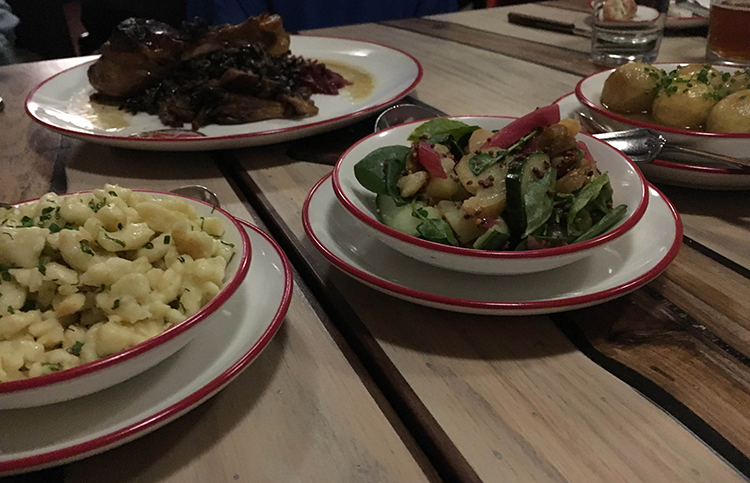 Taking advantage of Ratzsch’s vast German beer list, our four-top sipped selections from Weihenstephan and Spaten to go with what might be the best complimentary starter in the entire city: an incredible bread basket with rye and pumpernickel buns and butter. The bread is delicious enough that it challenges the diner to exhibit a bit of restraint, lest they gorge themselves before anything else shows up. With relative restraint exhibited, we plowed through a pummeling of appetizers and sides. Sauerkraut fritters, spaetzle, potato salad, and kartoffelkloesse (potato dumplings) hit the table first. The modest appearance of these starch-heavy appetizers did little to defend them against a swift and merciless devouring once the flavors they possessed were realized. The most newfangled of the apps were the fritters, which were balls of sauerkraut, landjäeger, and bacon. These approachable, snack-y bites might have an unassuming appearance, but they tasted like something the gods would eat at a Brewers game. 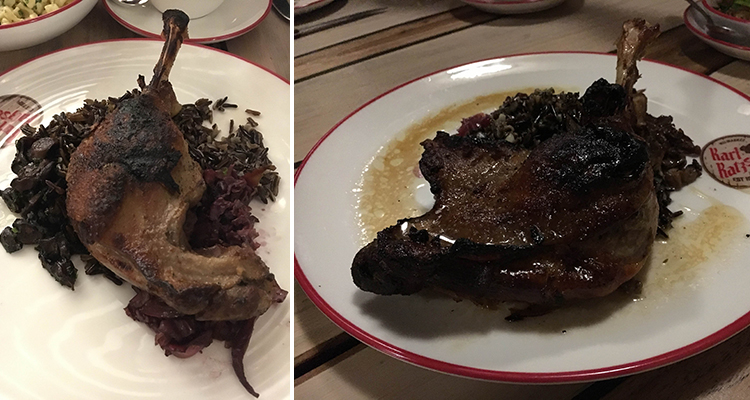 For some reason, it seems there’s a recent trend in restaurants where the appetizers and snacks section is the beholder of flavor, with basic and uninspired mains lying in their wake. Ratzsch’s takedown of that trend is executed with extreme prejudice. Mussels cooked in hefeweizen, saurbraten, and crackling pork shank the size of your damn head serve as highlights. Also in the shank department is the can’t-miss goose shank (above). An enormous piece of tender goose with pickled red cabbage, honey, and wild rice. The truest triumph was schnitzel nach wiener art—breaded and fried pork schnitzel boldly covered with egg, anchovy, and capers—that were rich, unique, and un-fucking-believably delicious.

The verdict: For the better part of a decade now, Milwaukee has forged a strong identity for itself as an up-and-coming culinary destination. It’s possible that no place encapsulates that spirit better than Chef Hauck’s incarnation of Karl Ratzsch’s Restaurant. By honoring classic ingredients, techniques, and recipes in a building that’s bared the same surname for more than a century, all while still embracing the innovative spirit implicit in making food exciting, Karl Ratzsch’s has been imbued with a bifurcated identity that represents exactly what Milwaukee has been and what it can be. While the paint has yet to dry on the second iteration of Karl Ratzsch’s, it’s safe to say a masterpiece is in the works.