When we spoke to AJ Grill in late 2016, the Iowa native had recently relocated to Milwaukee and was trying to find some footing in the city’s comedy scene. Roughly six years later, it safe to say he’s done just that (and then some). Since coming to town, Grill has opened for the likes of Colin Quinn, Christina P, Michael Che, and Gareth Reynolds. He’s earned inclusion in a variety of renowned national comedy festivals. He’s become a regular at Milwaukee Improv and The Laughing Tap, and he’s fashioned a reputation as one of the city’s top comedians.

Now on the cusp of his 10th year of standup, Grill is going to say farewell to old material and start fresh in 2023. Before retiring his current set, he’s going to film a comedy special (that will also be released as an album on streaming services) at Hear Here Presents this weekend. Prior to his pair of taped performances on Saturday, November 19, Grill caught us up on the last six years, talked about his motivation for recording a special/album, and told us what’s next in his comedy career as he nears the decade milestone.

Milwaukee Record: The last time we interviewed you, you had recently moved to Milwaukee and were finding your place in the local standup scene. How have your comedy career and credits evolved since then?

AJ Grill: Oh man, I have been very fortunate in the last six years. I have done festivals all across the country: Cape Fear Comedy Festival in Wilmington, North Carolina, Altercation Comedy Fest in Austin Texas, Memphis Comedy Festival in Tennessee, and Flyover Fest in St. Louis. I have gone on a few short tours through the Midwest and out to Colorado, spent a week in Atlanta this summer. In 2018, I was able to do a bunch of spots in L.A., including a spot on a show in the Bellyroom at the Comedy Store. Locally, I have opened for Colin Quinn, Christina P, Michael Che, Mark Normand, and Shane Gillis. I got to work the opening weekend at The Laughing Tap with the big salami Sam Tallent. I would eventually get to headline the Laughing Tap in August 2020. I’ve been a regular at the Milwaukee Imrpov since they opened, and actually got to headline the Improv last second when Milwaukee native Gareth Reynolds had a flight delayed. All of this experience has helped me grow tremendously. I have been headlining locally for a few years now, but in the last two or so I have been able to take that on the road and headline independent clubs and D.I.Y. venues throughout the Midwest and beyond. I owe a lot of it to this city and the Milwaukee comedy scene.

MR: Why do you feel that now is the right time to do a special? Are you wanting to keep a record of some material before you cycle it out of your act? Are you hoping a full-fledged special will help you book out-of-town shows, festivals, and high-profile feature spots?

AG: Next February will mark 10 years since my first open mic and it just feels like the right time to record an album. I have about 45 minutes I am really proud of, and yeah, I want to record those jokes in a professional manner in the city that helped me reach this point. I don’t want to tell the same jokes for another nine years, and I also don’t want these jokes I love to just be lost forever. So it is a tribute to the first nine-ish years of my standup and hopefully a kick in the ass to grow as a comedian and start writing the next 45 minutes. I am mostly recording this album for me. If I get anything else from it, wonderful. I have  plans to get it out on the regular streaming platforms—YouTube, Spotify, et cetera—but hopefully getting it on other mediums like Sirius XM and a few others.

MR: Hear Here is a great performance space, but it’s not the first place I think about when it comes to standup comedy. Why did you feel Hear Here was the right spot for this?

AG: I just love the space so much. It’s unique, and that feels like an understatement. I have performed in venues all over the country and there just really is no space like it. I worked with Hear Here and Ryan Holman on producing comedy shows at Sugar Maple for years, and over the pandemic, we worked on a live YouTube streamed show called Papa Holman’s Party Palace.

The team he assembled as far as the cameras, sound, and lighting was top-notch. Like, it seriously blew me away. And just knowing the work they’ve done shooting live music sessions with bands I really like, it just made sense. I had mentioned something to Ryan a year or so ago and this summer he approached me and said, “Hey, let’s do it!” and we’ve been working on it since.

MR: You’ll be doing two sets on November 19th. I’m sure that’s mostly to allow for more coverage for filming and the ability to pick the better of two takes, but will any aspects of the shows differ, such as trying some different material or experimenting with different tags or anything?

AG: Yeah, I do plan on doing two sets that are going to vary just slightly. The order of some jokes [will differ]. I have an alternate ending for one joke I might do each one on each show. And it will be two different crowds, so ideally, no two shows are ever the exact same in standup.

MR: You have Donny Townsend opening. Being a comedian from Iowa, I’m not really familiar with him. Why did you pick him to help set the tone for your most important performances yet?

AG: There’s nobody else like ‘ol Donny T. He is hilarious, and he is so original. It’s just fun to watch every time. But the biggest reason is he is a very close friend of mine. Donny actually drove me to my second open mic ever at Penguin’s Comedy Club in February 2013. Also we just have fun together. And the closing joke on the album is a story that involves Donny, so how fitting is that?

MR: How do you expect this special recording to differ from the traditional standup show?

AG: This show is going to be a full experience. The Hear Here space is crazy cool. They have asked Discourse Coffee to come on board and they have made some crazy cool specialty cocktails. There has been attention to detail in every aspect of the experience. And of course I hope people want to attend to enjoy this 45 minutes of jokes I’ve been working towards for nine-plus years.

MR: What’s next for you after this special is in the books? Any plans for 2023 and beyond?

AG: Yeah, I do have some fun out of town stuff in 2023—some of it booked and some of it is up in the air yet, but I’m excited. And of course I’m excited to have to start with a clean slate and see how long it takes to churn out the next album.

AG: The late show is sold out! There are only about eight tickets left for the early show. Buy ‘em up! I love you, Milwaukee. 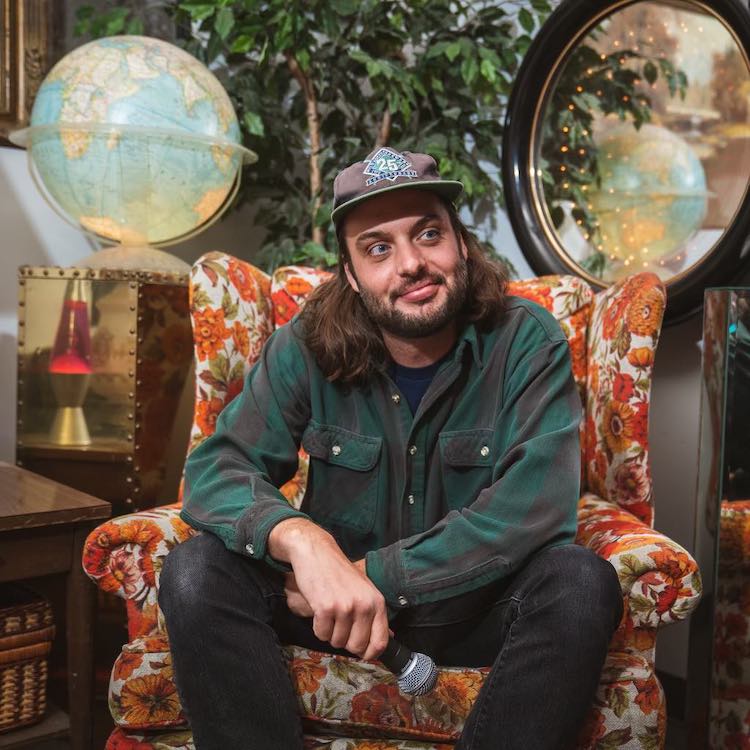