Beginning Monday, October 27, the one and only Dave Chappelle will be setting up shop in Milwaukee for an extended three-day, six-show run at the Pabst Theater. Unsurprisingly, all six shows are sold out, meaning a lot of Milwaukeeans are excited to see the one-time Chappelle’s Show star. As such, those fans must surely know of Chappelle’s abrupt departure from his Comedy Central show, his sojourn to South Africa, and his rocky return to stand-up—including the time he walked off stage in Hartford, Connecticut because a crowd full of bozos wouldn’t stop yelling “Rick James!” or whatever. But in case those fans weren’t aware of that last bit, the Pabst Theater is gently reminding them that if they engage in any kind of boneheaded behavior during the shows, they’ll be kicked the fuck out.

In a graphic attached to an email sent to ticket holders, a few simple rules for the Chappelle shows are laid out: no cell phone use, no picture/video taking, no heckling, no yelling out anything, no talking, no texting, and no recording devices of any kind. So yeah, don’t do those things—during this show or any other show that involves a person standing on stage and you sitting in the audience. Save that shit for when you’re watching Half Baked in the comfort of your own home. 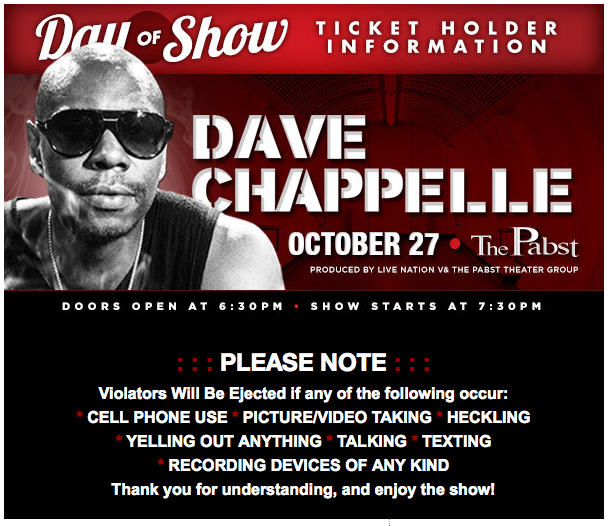