Originally started as an extremely small brewery in a glorified closet in the Lincoln Warehouse back in 2013, Enlightened Brewing Company‘s reputation and its footprint have both grown considerably in recent years. After opening a cozy taproom and expanding its brewing output to a spot on the ground floor of the Lincoln Warehouse in 2016, Enlightened relocated to a far more spacious brewery, taproom, and events space in the former Louis Allis Motors plant at 2020 S. Allis St. in Bay View in May of 2019.

On Saturday, May 21, Enlightened Brewing Company will celebrate three years in its new location with an “Anniversary Block Party” event. In addition to the taproom having its normal hours (noon to midnight), the fun will also spill out onto a parcel of Allis Street in front of the brewery beginning at 3 p.m. At 5 p.m., food vendors—Pigtailz MKE and T.O.T.S. (Tots On The Street)—will start serving festival fare like tots, cheese curds, tacos, sandwiches, burgers, and more. At that same time P.O.T.S. (Plants On The Street) will set up shop to sell plants, antique finds, and other goodies. Live music will also begin at 5 o’clock. This year’s entertainment offering is a hefty helping of Americana tunes from the likes of Lost Orange Cat and Radio Wranglers, who will play from 5-10 p.m.

And it wouldn’t be a brewery block party with some new beer releases. This year, Enlightened will release three New England IPAs as part of its “Rough Draught Series.” In addition to that potent trio of big beers (ranging from 8.1% to 8.5% ABV), the brewery will also tap a few sixth barrels of previous Rough Draught releases they’ve saved for the occasion. There will also be many of Enlightened’s year-round sudsy standbys available on tap and in cans. Speaking of cans, the event doubles as the six-pack release of Enlightened’s Common Cause.

The Anniversary Block Party will happen rain or shine. In the instance of bad weather, the music and vendors will move inside Enlightened’s spacious taproom. Be there! 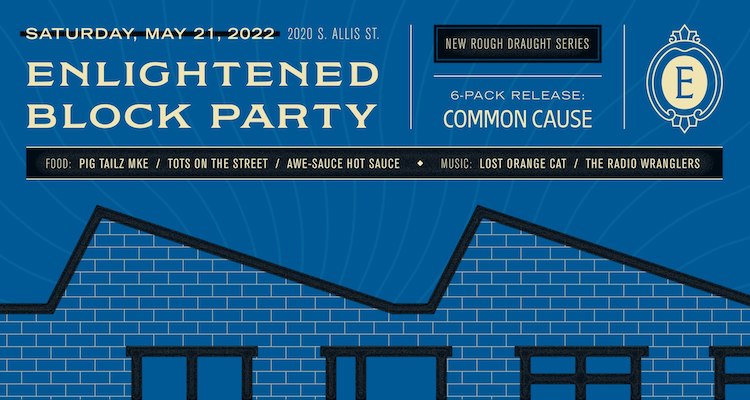