Riverwest was my home for three years until February of 2015. And when was the last time I got a fish fry in Riverwest? It was January 30, 2015, two days before I moved out the neighborhood! I cut my Milwaukee fish fry teeth in Riverwest, and I have shamefully abandoned its fish frys since leaving. Riverwest is home to many fish fry places, many of which I’ve gone to multiple times, such as Tracks and Klinger’s East. I felt it was time to return to my old neighborhood, and finally get a fry from Company Brewing (735 E. Center St., 414-930-0909), a place housed in a building that was Stonefly Brewery the last time I got fish at it.

As I entered, light poured through the large windows that line two sides of the building, illuminating the sleek bar and woodwork in the open room. Other modern light fixtures were suspended from the ceiling, as well as a few foliage-filled gardens. I took a seat in one of the many hard blue chairs, which appear to have been retrieved from a long gone middle school, and let my friend take a seat across from me on a padded refurbished church pew.

Being a Wisconsinite, any type of beer suits me. Porters and stouts, lagers and IPAs, they all have their time and place. But, when it comes to a fish fry, I like the crisp light taste of a pilsner to accompany it. So, I ordered a Poor Farm Pils, the pilsner made at the brewery. It just so happened it was before 6 p.m. too, so I got it at the discounted “cupper” price.

As it was easy to pick my starter beer, it was also easy to pick the fish fry, as there is just one option, perch, at $15. Only one choice can be seen as a drawback, but you get the feeling that Company Brewing wants to focus on one carefully crafted fish fry than have many not-too-thought-out frys available. This is first evidenced in that they chose perch for their fry instead of cod, which is usually the standard almost anywhere else. The one option that could be made on the meal was the choice of potato, and of course I went with the pancakes over the fries.

As the food arrived, my friend told the waiter, “He’s having the perch.” This brought on a funny awkward moment with the waiter staring down at both plates in confusion, as of course we both were having the perch, there is only perch, and he was holding two plates of perch. What I think my friend was trying to tell him was that I was having the potato pancakes. But in my mind I was just hoping she was saying that I should eat both fish frys. One can dream.

After that lighthearted moment, I looked down at my plate, and saw one of the most neatly arranged fish frys of recent memory. More often than not, a fish fry is tossed on a plate without care, but this was not the case here. Now, one can debate the importance of fish fry aesthetics, and if the throwing of a meal casually on a plate is actually more true to the spirit of a fish fry than a more refined or sanitary look, but either way, this fry’s appearance stood out to me. The overall impression and experience of Company Brewing’s fish fry was that it was original, and that it was a modern take on a tradition.

Sometimes perch fillets are quite small, but these were meaty and bulky. They had an amazing texture which was owed to the excellent batter. The one downside was the perch was not as flavorful as many other perch frys I’ve had in the past. It was fine, but I was expecting a more distinct perch flavor. The tartar sauce appeared to be homemade, and it was less creamy than the norm, with a great amount of vegetables in it. The potato pancakes also appeared to be homemade, and were worth opting for, although my friend raved about how good the french fries were. The coleslaw came in a small container, was almost entirely red cabbage, had a very small amount of cream in it, and perhaps had a hint of citrus. The rye bread came toasted and buttered, which was an excellent touch.

As I neared the end of my meal I ordered the Riverwest Radio Red, a red IPA, and it was even more delicious than the pilsner. After leaving, I proceeded to drink in more of Riverwest by getting a Mai Tai at Foundation, and a beer at the High Dive. I’m sorry that I abandoned you, Riverwest. I will reel in your fish again soon.

Rating: Original and modern take on traditional fry that still captures its essence; only one fish fry option, but it’s perch (broiled whitefish also available on regular menu); excellent perch texture and batter, but fish could have been more flavorful; good service; first-rate local craft beer; I was still hungry when I was done but that’s probably because I had like 10 pieces of fish last week at Clifford’s. 3.5 out of 5 stars. 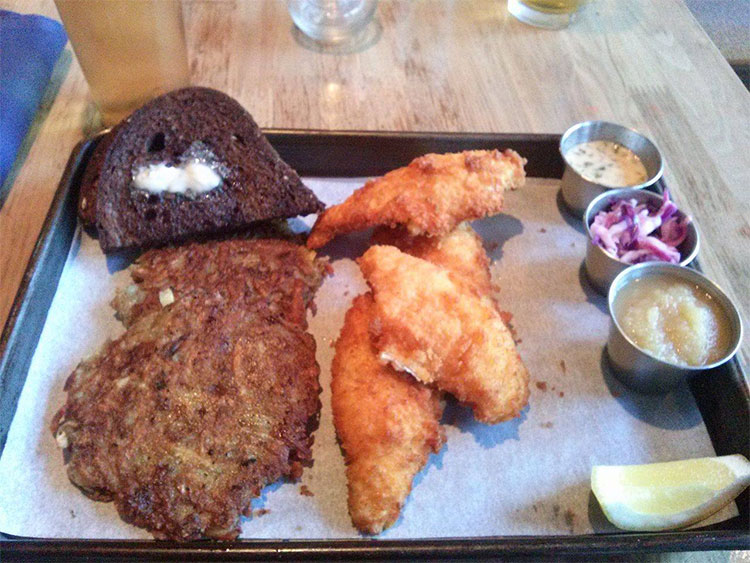