In Jennifer Reeder‘s film A Million Miles Away, we witness teenage girls communicating with one another via subtitles, and sometimes wittily cryptic emojis. They whisper plans of starting bands, revolutions, and running away. It’s as though we are eavesdropping on the secret language of a secluded world—and indeed we are. In the canon of films focusing on the lives of adolescent female characters, few in recent memory contain the depth and emotional complexities that are present in Reeder’s works.

Reeder, who has been making movies since the mid 1990s, first gained notice for her video series White Trash Girl, about a fictional feminist superhero spawned from a lower-class background. Since then Reeder has had her worked screened everywhere from Sundance and the Berlin Film Festival to the Venice Biennale and the Whitney Biennial. She is currently an associate professor in Moving Image, and the head of the art department in the School of Art & Art History at the University of Illinois at Chicago.

Reeder will be in attendance for the free screenings of three of her recent films Tuesday, March 1 at the UWM Union Cinema. Before that, Milwaukee Record spoke to the filmmaker about feminism, growing up (and staying) in the Midwest, and cat films.

Milwaukee Record: You’re originally from Ohio. What kinds of films/movies/media impacted you most growing up?

Jennifer Reeder: I grew up in Ohio and I now live in Indiana, so the Midwest has always been my home. It’s who I am. Artful, fantastic, challenging people and events occur between New York and L.A. I hope my films are proof of that. Since the beginning I have been influenced by these middle states and all that sky and flatness—even more so by the people and their kind of everyday destructiveness and determination to cope. The region’s fantastically unremarkable landscape and blunt emotionality are evident in my work as scenes unfold leisurely and characters make one small mistake after another.

I was a ballet dancer from a young age, which was primarily influential. I still feel a direct connection between dance and filmmaking. I choreograph movements within a frame—tell stories with bodies. My mom is a film lover so my “taste” developed most likely under her influence, which included lots of early noir, like Hitchcock’s Rebecca to the darkly moving and hilarious Harold And Maude. In high school, most of my friends were in punk bands, so that sense of DIY was present and organic.

MR: What made you want to start making films?

JR: Via my interest in dance and movement, I took a performance class in college after failing sculpture. We turned in weekly videos in response to the instructor’s prompts. Picking up a video camera for the first time was like recovering a phantom limb—I could simultaneously record and project my interior. I have not done anything else since. While I was an undergraduate student studying filmmaking in an art school, I was fed a steady diet of Maya Deren and George Kuchar. The influence of these two auteurs is evident still in all my films.

MR: You began making films at a moment when digital filmmaking began taking over a lot of the industry. How has digital video affected your work as opposed to working with actual celluloid?

JR: The very first moving image projects I ever made were VHS, so I was never seduced by film. I went on a blind date with video and fell in love. Early on I shot a lot of Super 8 film that I combined with video. I like the mash-up of texture as means to present sub-narrative. But Super 8 shoots like video—a point and shoot kind of thing. I took 16mm classes as an undergrad but I found it cumbersome. I always had more ideas than feet.

As a graduate student, I was deeply influenced by ’70s performance-based video art, which mostly featured a lone female protagonist “playing” in front of the camera in her home or studio. I never felt that film allowed for play and I still require a certain amount of this flexibility in my current projects. So, video it was, and video it still is.

MR: A lot of your work deals with female adolescence. What is it about this particular subject that interests you?

JR: In my opinion, there are very few great films for teenage girls. Cinematically, they are grossly misrepresented. I hope my films get it right. Young women are beautifully challenging, magical, and remarkable humans. My films are a celebration of this. I make the films for the grrrls and it is just a lovely extra that everyone else likes them as well. 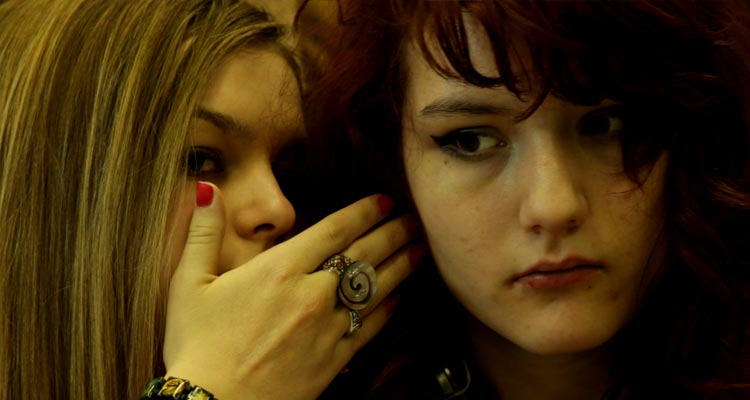 MR: You have three sons. Have you thought about making a movie about adolescent boys?

JR: My sons are eleven, nine, and four. They are young radical feminists so far, and I will certainly make a film about boyhood soon—maybe even a sports film. I was deeply touched recently by some college basketball championship after-game footage, in which both teams of young men were sobbing. That seems like a powerful and rare image. Cinematically, we often see male rage and male desperation, but seldom male sorrow. My sons are very expressive and I want to make a film that dispels the myth of the un-emotional male.

MR: How would you say feminism plays into your work? Also, how conscious are you of trying to include diversity/intersectionality in your movies?

JR: I will always claim feminism and I consider my films a form of social justice and in terms of the who/how of representation. I am entirely invested in inclusion. I cast a trans woman in both of the White Trash Girl shorts and my most recent film, Crystal Lake, features only youth actors of color for all the speaking roles. Stories matter, casting matters. I don’t see the point if I am not making a difference.

MR: There’s been a much-needed call for more diverse voices and gender equality in Hollywood lately. Do you feel like things are getting better in this regard? Also, do you feel like women filmmakers fare better outside of the industry?

JR: Well, people are stirring shit up, which is good, but I cannot tell yet if it’s actually getting better. It’s important that we talk about the problem but it’s also important that those conversations reach the ears of people who can actually initiate change. In my opinion, women own television right now and with content that includes trans issues and lots of people of color!

MR: Your screening on March 1 will include A Million Miles Away, Blood Below The Skin, and Marietta Brimble. Anything you want to say about these three films?

JR: Blood and Million are related thematically to each other, and ultimately to a feature-length project I will make soon called As With Knives And Skin. Marietta Brimble is brand new and very different from the other two and from most of my recent shorts. It was commissioned by the London Short Film Festival. I was asked to make a “cat film.”

Jennifer Reeder’s films will screen at the UWM Union Cinema Tuesday, March 1 at 7 p.m. as part of the UWM Film Departments’s Experimental Tuesdays. The screenings are sponsored by the Milwaukee Underground Film Festival.