For thousands of listeners spread from Fond du Lac to Kenosha and all around metro Milwaukee, Ramie Makhlouf’s voice is a part of the afternoon drive time commute, a trusted source of athletic information, and a representative opinion for other displaced Illinois sports fans living in Wisconsin. Recently, that same voice has been a source of laughter for much smaller audiences listening in bars, comedy clubs, and coffee shops in and around Milwaukee. In June of 2013, the co-host of “The Big Show,” a sports talk radio show that airs weekdays from 2 to 6 p.m. on AM1250 and 105.7FM, saw his longtime passion for broadcasting open the door to let him experience his other passion: stand-up comedy. More accurately, radio forced Makhlouf through the door.

As part of an advertiser promotion between the sports station and Comedy Cafe coordinated by “The Big Show” co-host Steve “Sparky” Fifer last summer, it was decided that Makhlouf, 34, would perform a set in the club before its annual summer break, then return to perform when the Cafe re-opened approximately a month later to see if he’d improved at all. The unorthodox ad agreement wasn’t pulled out of thin air. Makhlouf grew up watching the comedic works of Johnny Carson and early Eddie Murphy when was “too young.” Roughly a decade ago (while living in his native Illinois), he tried his hand at comedy at the legendary Lyon’s Den open mic—the same Chicago bar where such modern funnymen as Hannibal Burress, T.J. Miller, Kyle Kinane, Kumail Nanjiani, and Pete Holmes were cutting their teeth around the same time. However, as he climbed the ladder in radio, his new pastime was abandoned—at least until Fifer pressured him to perform.

“He gave me the push that I needed to go ahead and get back into it, which I was meaning to do, but, quite honestly, I was just being lazy,” Makhlouf says. “Sometimes you need that push.”

That push came in the form of a heavily-promoted true stand-up debut, complete with on-air discussion and a commercial in the popular station’s ad rotation touting the 12- to 15-minute hosting appearance at the longstanding comedy club in front of devoted listeners. Many of those listeners certainly came with hopes of seeing Makhlouf bomb and plans of then using the station’s “SoundOff Line” to remind him he sucked. Having been thrown into the uncomfortable scenario by a co-worker (whom Makhlouf thinks “on some level genuinely expected it not to go well”), the established co-host and aspiring comic exceeded all expectations.

“I was very impressed. He had very good control of the audience and good stage presence about him,” Fifer says. “I knew he was nervous before, but once he got up there and that first joke hit, then it looked like it was just cruise control after that. I set him up to kind of take a beating if it didn’t go well, but I thought he was going to work his butt off to make sure that he gets to be where he has to so he’s ready. And he was.”

Some listeners left impressed too.

“They were really supportive. On the way out, a lot of them said, ‘Man, you’re not even funny on the radio.’ Which is kind of a backhanded compliment, but I’ll take it,” Makhlouf says. “I have to say the reaction was really positive from the start, which gives you the confidence and the motivation to keep on doing it.”

Makhlouf echoed his impressive debut with an even more polished second Comedy Cafe outing when the club re-opened, and was put on the schedule as a frequent host and performer at the club. Meanwhile, he’d caught the comedy bug, and used the confidence earned during those initial promotional appearances as a catalyst to seek out more stage time in a local scene he admitted he “had no idea was here” before he dusted off his long-since-discarded comedic aspirations. As Makhlouf sought out open mics and showcases in various non-traditional nooks of the greater Milwaukee area, the comedy community as a whole was quick to adopt him as one of their own.

“From my impression of starting in the scene just a couple months after he did, I had thought he’d been doing it for a long time—just the way that he was regarded and how he was accepted,” Lisan Wood says. The two frequently attend the same open mics and performed at the Cactus Club showcase together earlier this month. Caste Of Killers co-founder Jason Hillman has also performed with Makhlouf a few times, and has booked him to be part of events put on by his comedy collective, including a November 2 showcase at Kelly’s Bleachers of Big Bend. “I love working with him because there is just real humor there,” Hillman says. “He will admit that luck gave him his current wings but if you listen, he’s got the goods.”

The majority of Makhlouf’s material is far from FCC sanctioned. From pointed bits about being of Palestinian descent (complete with hilarious impersonations of his father), self-effacing items about his struggle to meet women, and jokes about drugs and pornography, his brazen and intense on-stage style wouldn’t play on terrestrial radio waves.

“I love that about stand-up comedy,” Makhlouf says. “It’s you. Nobody is going to tell you what not to do, not only what you can and cannot say in terms of language, but also with what subjects you can talk about. You can go up there and just be you.” 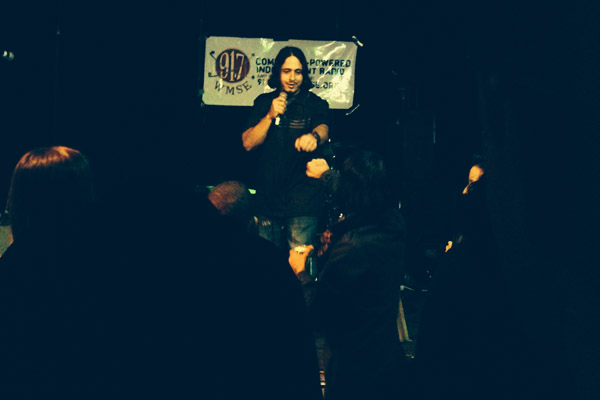 Fifer classifies his co-host’s comedy as “adult” in nature, even admitting some of Makhlouf’s material lands outside his personal comfort zone. He says if his radio counterpart did most of his act on air, he’d be out of a job. “When I sat down and he started doing his thing, I was surprised by how blue he was,” Fifer says. “We always joke on the air that if you see Ramie Makhlouf do stand-up comedy, you’ll never hear Ramie Makhlouf the same way on ‘The Big Show’ ever again.”

As disparate as the work he does sitting in front of a microphone by day and standing on stage with one in his hand nights and weekends seems, there’s actually a thinly-drawn line connecting Ramie Makhlouf the radio host and Ramie Makhlouf the fearless comic. The comfort he’s developed on air through years of trying to get a word in between takes from Fifer as well as former Packers Gary Ellerson and LeRoy Butler has shortened the path to feeling at ease on stage in his unforgiving new creative avenue.

“They both help each other. As far as timing and improv, absolutely,” Makhlouf says. “When I started doing stand-up, there was almost no nervousness when I got up on a stage in front of a group of people. I don’t know if that would’ve been the case had I not been hosting radio shows.”

He says he’ll sometimes rework things he’s talked about on the air to become material for his act. Similarly, he feels his experience doing stand-up has informed his radio abilities as well. However, that’s where the connection ends. Save for an impersonation of Ellerson disappointed with the comic’s inability to get women (which he only breaks out for audiences he knows have a definite “Big Show” representation), Makhlouf rarely references sports in his comedy.

Though initially propped up by his sports talk status, the up-and-comer is actively putting in the work to hone his act. In addition to taking on as many shows his work schedule and Kenosha residency permit, Makhlouf fine tunes material at open mics as often as four nights a week, including the Thursday mic he hosts at Brewski’s Sports Pub. He insists he still loves doing radio, but also admits he’d like to one day be a headliner-level comedian with the ability to tour clubs around the country. It took almost a decade and an external nudge, but Ramie Makhlouf is reinvigorated and back on track to push his comedy career forward.

“He’s so dedicated to the comedian thing that I think that’s where his career is probably going to take him within the next five years,” Fifer says. “There’s something there.”