While there’s always room for growth, Milwaukee’s stand-up comedy scene is in a very healthy place right now. This weekend alone, area comedians will perform in bar room variety shows, secret house gigs, late night talk shows, off-the-cuff sketch performances, and much more. As they’ve done the first and third Fridays of each month for years, members of Caste Of Killers will give themselves and other comics stage time in the basement of Karma Bar And Grill as part of its semi-monthly comedy showcase. Not only does the near-five-year-old comedy collective pre-date the glut of offerings in the now-burgeoning Milwaukee stand-up scene, it provided an early forum for countless local performers to develop.

Seeking consistent places to perform in a transitional comedy spectrum and to help unify a comedic community in flux, comic Jason Hillman partnered with then-Milwaukee funnyman Damon Millard to form Caste Of Killers close to five years ago.

“There wasn’t a whole lot to do,” says Hillman. “There were mics to be done, and shows to do, but there weren’t a lot of them and they weren’t steady. They faded away sometimes. The clubs didn’t really care about the newbies in Milwaukee, so we had to open up our own shows. That was the idea, aligning ourselves with places you wouldn’t think would have people telling jokes.

“Instead of going to Chicago or running somewhere else, we thought, ‘Why not create that kind of explosion here?’’

Hillman says early attempts saw the duo trying to start showcases at Art Bar (a monthly show that exists to this day), Nice Ash Cigar Bar in Waukesha, and short-lived “terrible, terrible popped-collar bar” Live On North. Roughly three years ago, Caste Of Killers found a home base at Karma, which Hillman considers to be “consistently the best room in the city.” Beyond the semi-monthly showcases, the collective also hosts an open mic in Karma’s basement every Wednesday night. Initially, the growth was slow and the success was measured, but the COK co-founder noticed growth in both the volume and the quality of aspiring comics making their way out of the woodwork and into the spotlight in front of the stone wall in the East side bar’s intimate lower level.

“These people were always here. They were always sitting around writing stuff, being funny, and I think that over the course of the last four years or so—especially over the last two—it’s become a really comfortable place,” Hillman says. “People from afar have watched these brand-new people come and thrive and have a place to get better, so it inspires everyone else to come roaring out.”

He explains his somewhat active role in the scene is like “watching a baby grow up,” and that he enjoys seeing performers who started at COK-produced events such as Jake Kornely, Tyler Menz, Gary Zajackowski, and Patrick Tomlinson starting their own shows and open mics elsewhere in town. Hillman says the rapid expansion is a positive thing as long as there are enough motivated comedians who want to perform.

“All the sudden there’s 30 people on the open mic list on Wednesdays. Are you crazy?” Hillman says. “We used to get 12 and consider it a success. Now we’re talking about doing a runoff mic for people late at night. That’s fascinating and validating and just kind of a beautiful thing to watch.”

Caste Of Killers has expanded with the scene. Three years ago, Mario Robinson was indoctrinated into the group. Two years ago, Eric Thorson was added to the mix. Millard relocated to New York, but still returns to perform on occasion. In addition to Karma and Art Bar, the collective now also produces monthly events at Sherman Perk, Big Head Brewing Company, and even The Endzone Sports Bar down in Delavan. Hillman says he’d also like to start another open mic on Milwaukee’s South side in the near future.

What started as two guys who alienated audiences with crass comedy at the Miramar music and poetry open mic who just wanted a place to perform consistently, has quickly blossomed into motivated and calculated comedy force. Hillman is quick to stress that there were people doing comedy in town long before Caste Of Killers. Still, the unified and self-propelled approach to Milwaukee comedy has made Caste Of Killers a linchpin in an increasingly formidable comedy scene, and has been an invaluable asset to other performers in the process.

“I think the opposition is dwindling. I think people are starting to recognize that there’s really something happening here, and supporting it,” Hillman says. “We’re building momentum, and we have people who want to help. We’ll make it another five years.”

Caste Of Killers hosts its free weekly open mic at Karma tonight at 8 p.m. Its next showcase is also at Karma on Friday, July 18. It features all four Caste members, Chicago comics Timmy Brochu and John Eide, and host Suze Bischoff. Tickets are $7 and the show begins at 8:30 p.m. 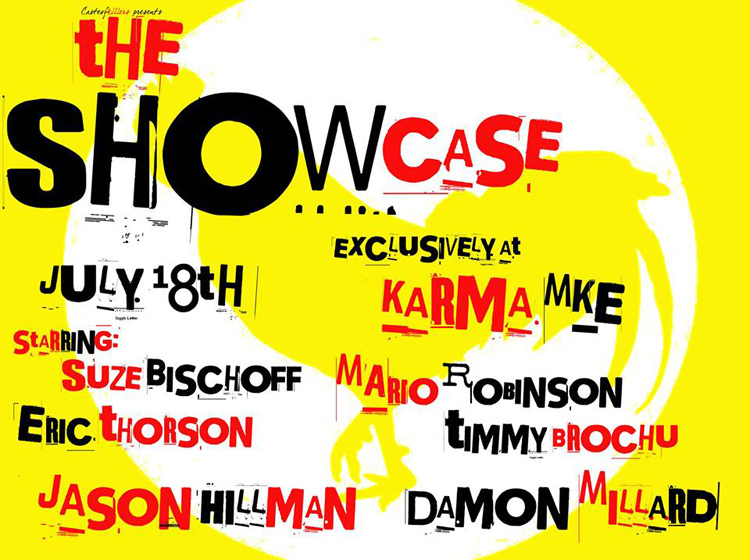