In addition to being “The World’s Largest Music Festival,” Summerfest also offers a bevy of other attractions that complement the 11 days worth of music (“Taped” or otherwise). One of the longest-running non-musical components of the Big Gig is a nightly improv show from ComedySportz. Though the comedy stage has been replaced my cover bands and cocktails in tubes at JoJo’s Martini Lounge, the laughs roar on in the nearby Kohl’s Captivation Station, which hosts a 6 p.m. ComedySportz showcase every night of the festival.

One of those improvisers is Jon Waldbauer. Since first stepping on stage five years ago, the affable funnyman has quickly climbed the ComedySportz ladder en route to becoming a regular player. Prior to his Thursday and Saturday night Summerfest performances, Milwaukee Record asked Waldbauer about CSz’s presence at the fest, what prompted his foray into comedy, why he relishes the role of the straight man, and how he applies his training to trivia hosting.

Milwaukee Record: So I guess we should begin with the fact that ComedySportz is going off-site and taking the show to the family tent at Summerfest. What can people expect with that?


Jon Waldbauer: ComedySportz has been kind of a staple of the Summerfest lineup for a long time. There used to be that actual comedy stage, which is now the JoJo’s Martini Lounge. It’s fun hearing from some of the guys who were around much longer than me tell stories about hanging out with Lewis Black or whatever. It was there for a long time, then there was a switch in how they decided to start booking it, then we got picked up by the Kohl’s Captivation Stage, which is this family area with face painting and cool activities for kids. There’s some educational stuff. Every night at 6, ComedySportz gets on that stage to do a full ComedySportz show.

MR: Obviously, when you go to a normal ComedySportz show, you’re entering the building with the intention of seeing improv. On the grounds at Summerfest, you’re having people walking by randomly. Some want to get in the shade or get a break from music or just see what’s going on in this little white tent. Is there a way you hone the shows to adapt to the setting?

JW: There are a lot of things to take into consideration. Inside ComedySportz as a facility, we can control the sound and the temperature, things like that. That’s not the case in a tent by the lake. You’ll hear some carnival sounds bleeding in every once in a while and some of the other music going on. There are definitely adjustments to be made, like being more deliberate about staying up on a microphone so people can hear you. Realistically, the ComedySportz format is so high-energy anyway that we don’t really change what we do. We’re still playing a lot of the same games we play in the ComedySportz facility. It’s just trying to make sure we’re able to engage people who are there. If people want to stop by and watch a few pieces of the show and keep moving, that’s cool too. We’re just happy to engage with people when they give us the chance.

MR: I know it’s a rotating cast at Summerfest, even though ComedySportz will be there every day. That said, what can you expect and who are some people that are performing?

JW: The performers change daily, but the lineup of people you’re seeing are the same people you’ll see perform at the actual ComedySportz facility. You have everyone from Brian Green, who is an original cast member that’s been doing it for more than 30 years, and people who are on the newer end of things like myself. It’s not like a B team or anything like that. We always bring our best. 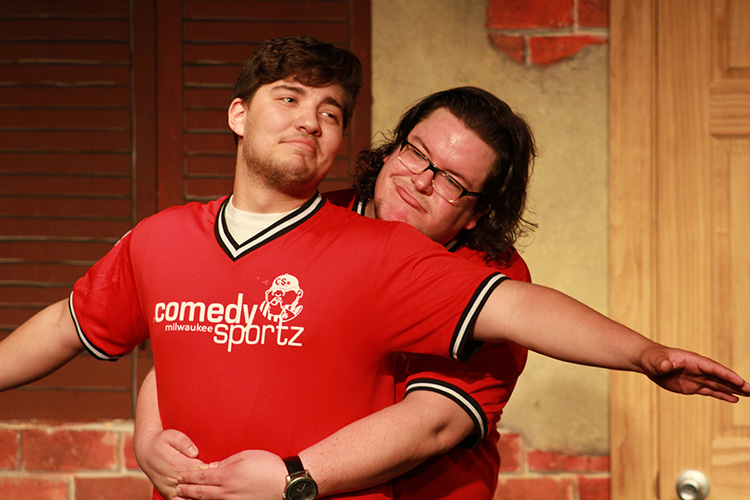 MR: You’re one of the newer performers? When and how did you get involved in improv?

JW: At some point in my youth, I had some friends who were involved in the high school league. So I have a very clear recollection of going to the old building, before we moved to our space on 1st Street. I remember seeing friends and family doing that and having a really good time, but it never entered my brain as something I should do. When I grew up, I became more and more of a comedy nerd, but it still never crossed my mind as something I’d pursue. But my mom owns a business in downtown Milwaukee, so for a Christmas party one year, she hired ComedySportz to come.

ComedySportz shows are very participation-heavy. They rely on audience engagement. I volunteered to participate in one of the games. I played a game called “Changing Styles” with Mike Kauth and Bob Orvis. I just got up and did a scene. I played along and had so much fun doing it. Afterwards, Bob talked to me and said I should think about taking a workshop. So I did, I took the 101 workshop and head a really good time, then did 102, 103, and eventually found myself playing on the field with the people I had been watching over the last few years. I didn’t really get into it with the thought I was ever going to perform. I just got into it and stayed with it because it was fun. It was an outlet. I tend to be a little more on the introverted side in my personal life, so this a cool way to flex a different side of my personality.

I’ve gotten to meet some really fantastic people that have essentially become a family to me. ComedySportz is like the Island Of Misfit Toys. Everyone is welcome. Whatever it is you nerd out about, you’re going to find someone else you can connect with there. That was really the big draw for me when I started going through classes. I found this community that I wanted so much to be a part of. 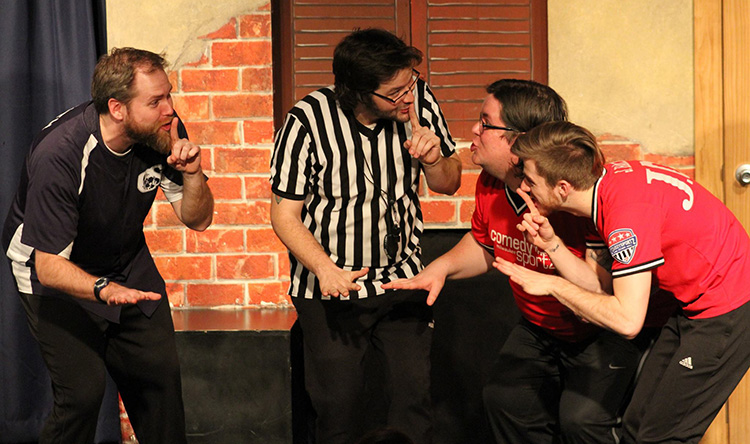 MR: Even though your role changes from game to game and night to night, if you had to distill your style or comic essence into one description, what would it be? Are you zany, outlandish, verbose?

JW: I think I’m really good at playing the straight man. I like grounding things in reality, so I can let other people that I’m performing with really run with things. It’s fun to have those moments, then step up to have the big joke when it’s appropriate. I really like the support aspect of improv. That’s a big difference between improv and stand-up comedy. Stand-up is kind of you versus the audience, but improv is much more an inclusive medium with the capacity to share that enjoyment with others in real time.

MR: And another vehicle for humor is Trivia Mafia, which you host every week at Vintage, right?

MR: I know the questions and answers don’t allow much wiggle room, but is there a way you incorporate your improv experience into your hosting duties?

JW: Sure. I’ve had some positive and negative responses to my intentions of putting a little improv into stuff. Sometimes I’m a bit goofier and read questions as a character or throwing in a few extra word to hopefully lighten up some of the more serious questions. But mostly it’s just about getting people together and having a good time answering questions for prizes. For me, all of my life, I’ve just tried to find ways to inject joy into my every day and just share that with other folks. I’m so appreciative of having had the opportunity to be able to do that. I just feel like I’ve found who I didn’t realize I wanted to be.