There’s only a weekend and some change left of Summerfest 2017, but there’s still plenty to see. Huey Lewis & The News! The Shins! Atmosphere! REO Speedwagon! Tom Petty (again)! Step off the main Henry Maier Festival Park drag, however, and you’ll find a bevy of oddball, less-traveled attractions. Here’s an entirely non-scientific ranking of 10 of those (non-music, non-food/drink) Big Gig staples.

10. Summerfest Store
Ever find yourself at Summerfest, but unable to locate official Summerfest merch? Of course not; that stuff is everywhere. New this year anyway is the Summerfest Store, a big, red, Staples-looking box plopped down in the middle of the grounds. Inside you’ll find oodles of locally designed Big Gig goodies: T-shirts ($25-$30), hoodies ($35), caps ($24), leather wristbands ($25), pint glasses ($5), and MilwaukeeHome and Too Much Metal stuff. Most expensive item? A $72 Summerfest jean jacket. Strangest item? A $35 set of Summerfest guitar picks emblazoned with old slogans like “It’s a shore thing” and It’s smilin’ time again.” 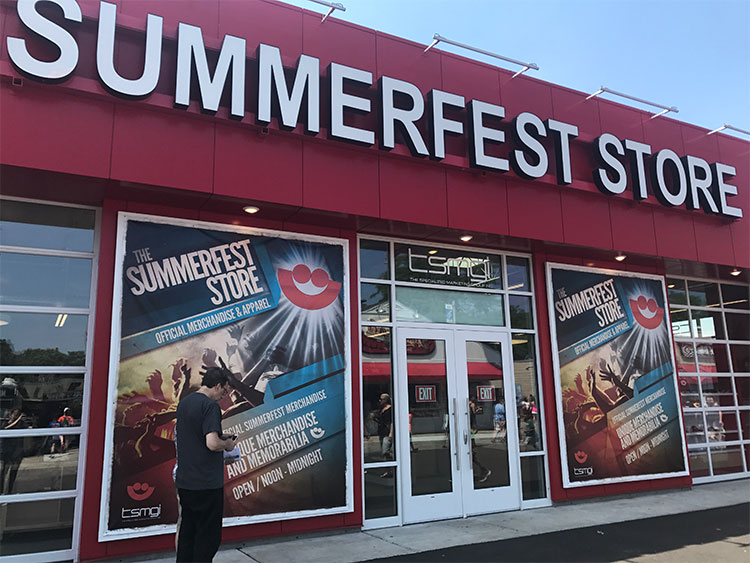 9. Kohl’s Captivation Station
If you ignore the sometimes crushing crowds and the folks who think smoking cigars in 80-degree heat is a swell idea, Summerfest is remarkably kid-friendly. But why let the Northwestern Mutual Children’s Theater and Playzone (eternal home to David Seebach’s Wonders of Magic) hog all the kiddie glory when there’s much crazier shit going down at the Kohl’s “Let’s Just Keep These Little Weasels Busy, Okay?” Captivation Station? Located on the south end of the grounds, this grassy oasis boasts the usual arts and crafts and phone app distractions, but excels with a covered stage that always seems to feature a puppet show with a talking penguin or something. Oh, and ComedySportz every night at 6 p.m.

8. South Marketplace
Rodeo Drive. Michigan Avenue. Fifth Avenue. Summerfest’s South Marketplace. Take a stroll down the latter and you’ll come across everything from tie-dyed ponchos and henna tattoos to doggie fun wear and handwriting analysis machines. And don’t forget the classic “Big Chair Photos” tent, which grants you the privilege of paying $5 to get your picture taken in, well, a big chair. 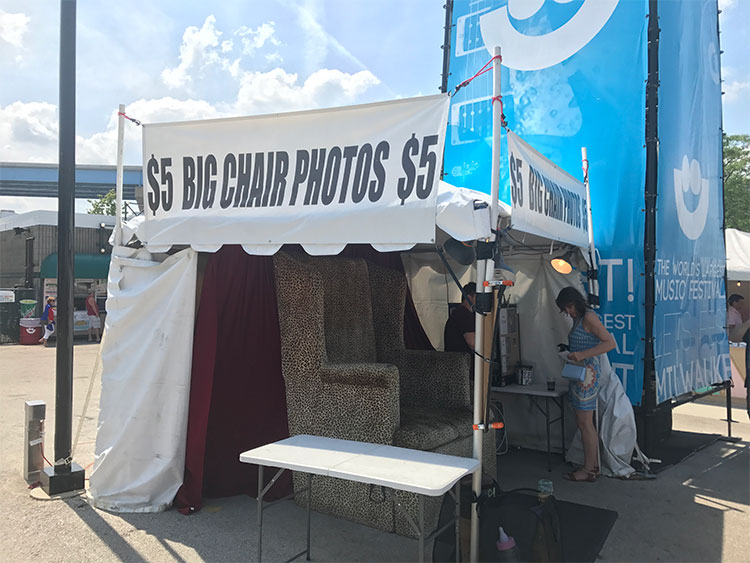 7. Paddleboat rentals
Paddleboats are like McDonald’s at 1:30 a.m.: they seem like a good idea at the time, but they quickly lead to a heart attack. If you’re dead set on killing your shins while tooling around the (admittedly scenic) Milwaukee harbor and Lakeshore State Park, you can score a 30-minute paddleboat ride for the low, low price of $10 for adults, and/or $7 for kids.

6. Elizabeth “Bo” Black Family Fountain
Before being let go and replaced with current Summerfest CEO Don Smiley in 2003, Elizabeth “Bo” Black was the name and face of the Big Gig for two decades. Today, a splash pad fountain stands at the MidGate in her honor. Yeah, it’s usually just a bunch of little kids screwing around and blasting themselves in the face, but the high-pressure water streams are perfect for a quick cool-down. Just remember: NO DIAPERS. 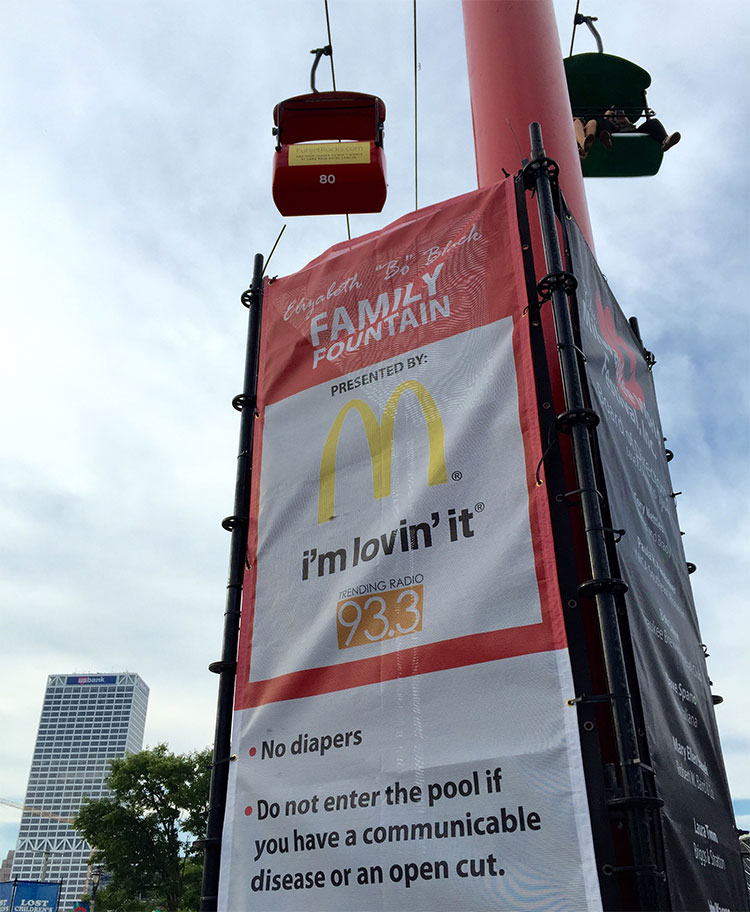 5. Hole-In-One
We all know what happened to George Carlin when he performed at Summerfest in 1972; we can only imagine what the legendary comedian would say (if he were alive today) about the Meijer Hole-In-One contest located on the east shore of the grounds. “It is time to reclaim the golf courses from the wealthy and turn them over to the homeless!” Carlin once said. “Golfing is an arrogant, elitist game which takes up entirely too much room in this country. Too much room in this country!” Okay then. Anyway, the “smack a tiny golf ball on shore and see if you can get a hole in one on a tiny island in the middle of the harbor and win $5,000” contest does take up a lot of room, but it’s fun to watch folks try.

4. Red’s Novelty Arcade
Now we’re talkin’. Located in the North Market—the one place on the grounds that still has a slight midway vibe—this tented arcade is the perfect destination for people who enjoy paying $20 to get into an outdoor festival and then spend two hours playing video games. We love these people. The game selection at Red’s is fine—Terminator Salvation, Big Big Safari, Guitar Hero, lots of coin pushers, lots of beer pong and Skee-Ball machines—but the real draw is the “world’s largest” Space Invaders game. Space Invaders Frenzy invites you and a friend to take a seat, grab hold of mounted light guns, and blast away at the descending 8-bit alien forces on a massive 8-foot LED screen. It’s pretty rad, it only costs $1, and you can try to beat noted Space Invaders pro Deeznut. 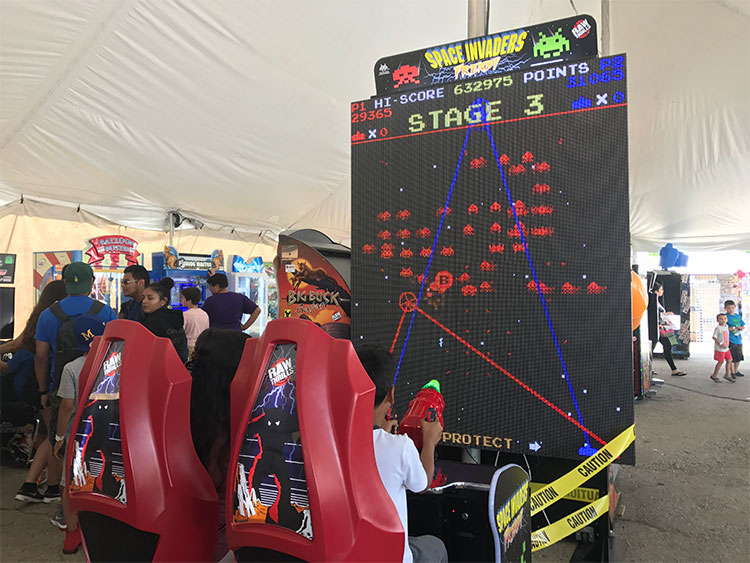 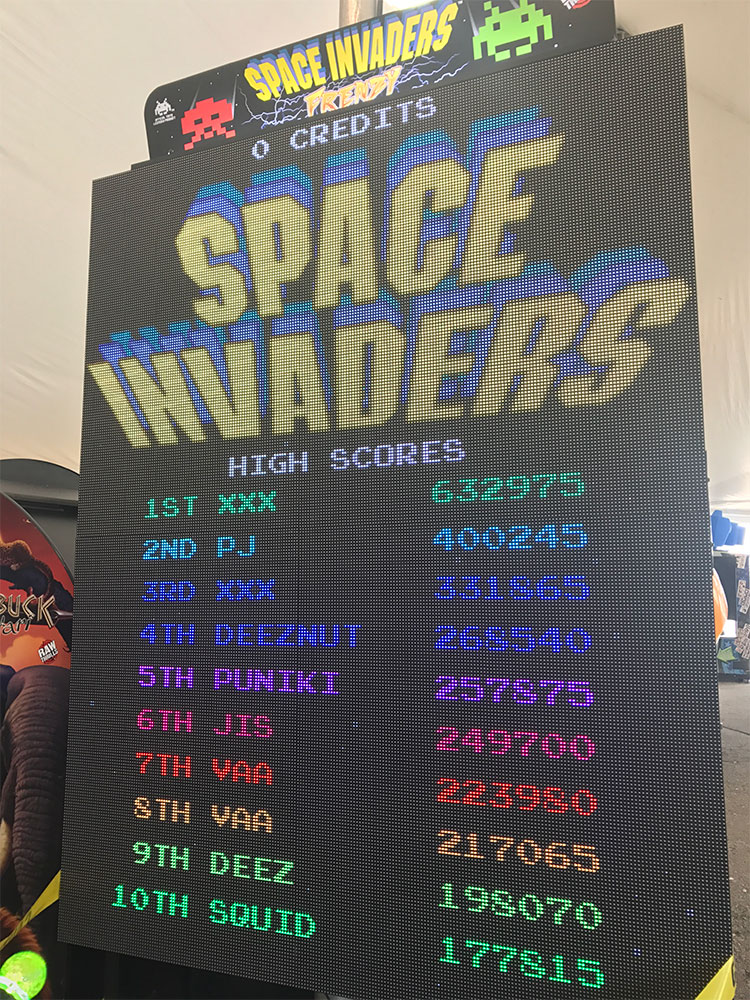 2. Sky Glider
Almost as iconic as the “smile” logo and the overpowering smell of roasted nuts, the can’t-miss Sky Glider practically screams “Summerfest.” Five bucks will get you a one-way trip over the grounds, while $8 will get you a round trip. See the Spin Doctors from on high, take a gander at downtown Milwaukee’s ever-changing skyline, and pray the thing stops cold in mid-air so you get more bang for your buck. The path directly below the Sky Glider may be perilous (NO SPITTING, PEOPLE), but the actual seats on the souped-up ski lift make you feel like royalty. And they save you the hassle of pushing your way through a crushing crowd at 11:30 p.m. 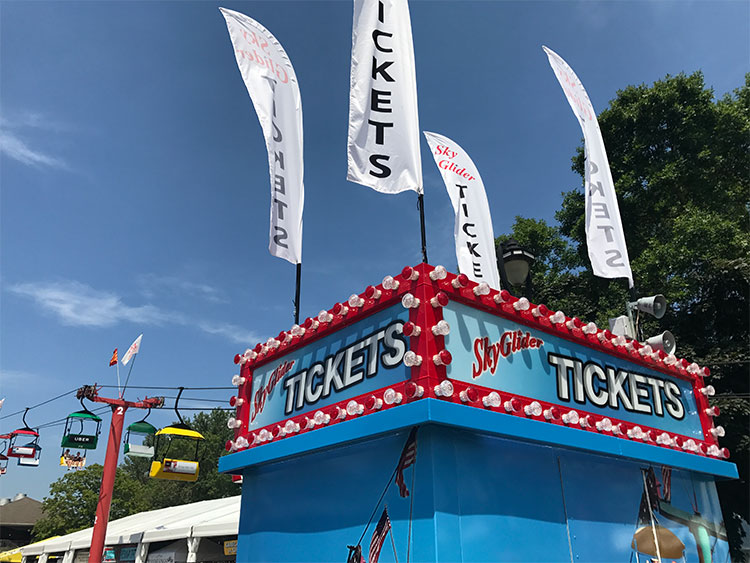 1. VR Domelandia
It’s been two years since Summerfest scrapped the oft-rebranded “local stage” between the Uline Warehouse and the U.S. Cellular Connection Stage. Last year, a giant inflatable slide took the wayward stage’s place; this year, the site is home to some geodesic domes that promise 360-degree 3D virtual reality sensory immersion the likes of which haven’t been seen since that time you slugged a bottle of Robitussin and saw Pink Floyd’s The Wall at the 41 Twin when you were 15. (Just us?) Anyway, the VR Domelandia is truly, wonderfully ridiculous, a 30-minute digital mind-fuck that has blown minds, man, at fests like Coachella and Burning Man. Pony up $10, step inside a darkened dome, take a seat (or lie down on some handily provided rugs and throw pillows), and experience IMAX-esque visuals that are part “Star Gate” sequence from 2001, part Lawnmower Man, and part Trapper Keeper art come to life. The (EXTREMELY LOUD) soundtrack, meanwhile, is a combination of stuff you used to hear at Natural Wonders, Skrillex, and the sound the Transformers make when they transform. Whoa.