Milwaukee’s ongoing comic exodus is no joke. Within the last two months, veteran road comic Johnny Beehner and the Late Show With David Letterman appearance credit he acquired in January moved to Los Angeles. Having more-than hit her stride in Milwaukee, Lisan Wood relocated to Washington D.C. at end of July. Even more recently, Allison Dunne, Liz Ziner, and Josh Ballew just made the small-but-significant jump to Chicago for the sake of comedic advancement. Though there’s still a wealth of hilarious comics in town, and a promising batch of performers eager to take some of the stage time surrendered through relocation, the departures are still a hit on a stand-up comedy scene that was, arguably, the best it has ever been. Tonight, one more local comedian will perform what could be his last show as a Milwaukee resident. Though Sammy Arechar is merely moving to Chicago, the 23-year-old phenom’s farewell is the most bittersweet of them all.

Since sneaking into bars to perform at open mics when he was 19, Arechar has quickly developed into one the city’s funniest and most unique stand-up talents. What started as a teenager’s outlet to spout one-liners when he wasn’t working or playing video games, has quickly transformed into something that has allowed the up-and-coming comedian to share the stage with nationally-renowned comics in clubs and theaters throughout the Midwest (and beyond), and has him on the cusp of a full-fledged career in stand-up comedy.

“It’s crazy. Originally, I wasn’t even planning on [seriously] doing stand-up at all. It was just a thing to try to do,” Arechar says. “After that first joke landed, when I caught that laugh, I knew it was something I’ll want to do for the rest of my life.”

Arechar’s early material was almost exclusively populated with a variety of short-form observations and puns. Milwaukee comedian Greg Bach recalls first seeing him in 2011, when both were new to stand-up.

“It was at a Karma [Bar And Grill] open mic and he was still telling strictly one-liners and solving a Rubik’s Cube on stage while he was doing it,” Bach says. “At that time, I was so jealous because to have such strong jokes while being so young, and you’re able to do that at the same time, that’s everything I can’t do. To watch him do all those things at one time, I was in.”

Though Arechar is still prone to starting sets by talking about his tow fetish (“It’s always so exciting for me to see somebody get their car taken away.”) and he continues to apply wordplay to things like Out Of Order signs and pay stub terminology with hilarious results, he’s also evolved into a captivating storyteller on stage. He’s ditched the Rubik’s Cube, but he’s honed his beat-boxing ability into a tool that can win over any audience and to, oftentimes, serve as his closer. Along the way, he’s grown confident enough to incorporate the audience into his act and to riff freely, at times for a sizable portion of his set.

“I don’t really like succumbing to saying something that I don’t find personally funny, and I’m not one to pander to people,” Arechar says. “The thing about stand-up is that I’m working for myself. I don’t have to answer to anybody or ask if it’s okay for me to say the things that I want to say. I want to use my time saying things I want to say. So if I bomb, then I guess I bomb. I just want to do my own thing.”

Last weekend, in front of a packed Next Act Theatre, Arechar—the headliner of Milwaukee Comedy Festival‘s 8 p.m. show—did his own thing, and he killed. He pulled out trusty one-liners that have become touchstones of his set. He beat-boxed, recited the same joke about self-checkout lanes in both English and Spanish, and enraptured the audience with a long-form personal story about coming out to his father…merely to test the waters of tolerance for his gay brother. Between bits, Arechar rattled off improvised ad copy for Steinhafels, a regional furniture chain that was sponsoring the festival.

Milwaukee Comedy Festival founder and co-producer Matt Kemple has booked Arechar on numerous shows at his Underground Collaborative performance space and, twice, as part of his festival. After seeing him once, Kemple says he “had to see him again,” and has had a front row seat to observe his rapid progression.

“Sammy has such a unique style and it’s been exciting to watch him grow and take his comedy to the next level,” Kemple says. “He’s got a really unique voice in his humor and there’s a lot of intelligence behind that. He’s somebody that, when he sets his mind to something, he can do it.”

Beyond gaining acceptance to his hometown festival, Arechar has regularly performed in out of state comedy festivals. He’s already established himself in the sturdy and insulated Madison and Chicago comedy communities, and has opened for an impressive list of known comic commodities that includes Garfunkel And Oates, Moshe Kasher, Matt Braunger, Hampton Yount, Josh Fadem, and recent host of Comedy Central’s This Is Not Happening, Ari Shaffir.

“Sammy is great,” Shaffir says. “I like his energy and his enthusiasm and he’s funny. He’s real solid. Hopefully, he stays with it and continues to grow.”

Shaffir helped Arechar book a show in Los Angeles, as part of the soon-to-be Milwaukee ex-pat’s upcoming “Neapolitan Tour” that features 20 combined shows in Denver, L.A., and Austin between August 21 and September 9, including two festivals and a pair of opening slots for iconic alt-comic Brody Stevens. Once he returns, the time will come to leave the only city he’s known and take the next step of what looks to be a promising journey to making people laugh on a larger scale.

It’s kind of a bummer that I’m going to be moving away from all my friends, but I’m excited,” Arechar says. “I know I should be moving, but it’s cool that people are rooting for me. I’m so excited that I’m not even nervous anymore.”

Though Chicago is certainly a larger market with a much more reputable comedy scene, if the incomparable comedian keeps his current trajectory, it could just be the next stop en route to far bigger things,things that will make anyone who witnessed his local origin proud he once called Milwaukee home.

“I know he’s going to do great things,” Bach says. “When you look at him, what he does, and what it takes [to succeed in comedy], he’s got as much a shot as anybody does. I think he’s smart enough to utilize every one of those shots.” 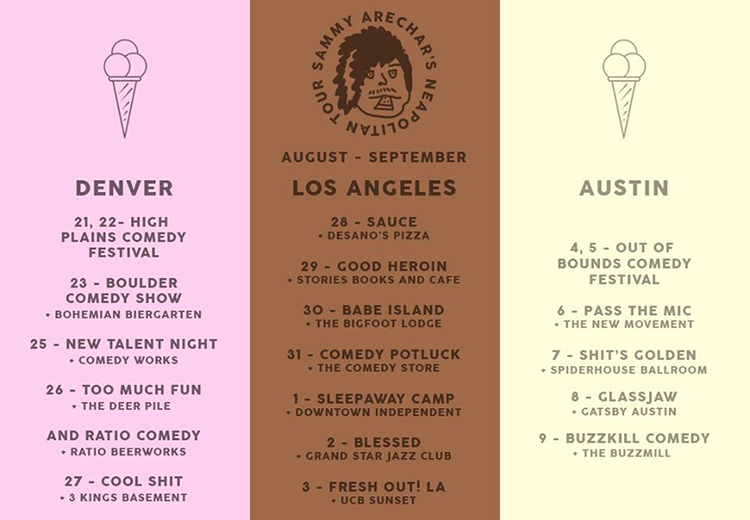