In the spirit of those all-hallowed tribute shows, eternally active Milwaukee comedian Jake Kornely started an event last year that allows comics to get in on the act of performing as someone—or something—else. Back for its second year, his Halloween Comedy Show will bring monsters, dead celebrities, historical figures, and more to Circle-A Café for a seasonal stand-up show that’s anything but ordinary.

“I wanted to do a different sort of comedy show. I’ve known bands who do a Halloween cover show every year,” Kornely says. “I kind of wanted to do that with comedy, but I wanted to make sure it stayed within these stand-up restrictions. You still have to write good jokes and come up with an original character.”

The inaugural installment featured a ventriloquist act by Invisible Man (Ryan Lowe), a flock of chicken puns from “The Poultrygeist” (Erik Koconis), Frankenstein’s Monster as an ’80s comic (Kornely), a respectable set by the ghost of Rodney Dangerfield (Tyler Menz), and The Devil himself…performing at his first open mic (Christopher Schmidt).

“It gives the performer a way to branch out,” Kornely says. “Not that I’ve tried to do much character work, but it was just one opportunity to do something fun that’s a little bit out of your element to see what you can do with writing for a character that’s not in your own voice, or to write for your own voice, but have it skewed by a character.”

This time around, 11 local comedians will dress up to perform as off-kilter versions of such characters as Jason Voorhees, Barbie, a zombie, the ghost of Joan Rivers, an alley cat, a skeleton, Rosie The Riveter, and more. Josh Ballew and his trademark afro will appear as the ghost of television art instructor Bob Ross. Beyond an opportunity for extra stage time, he took on the task of writing a new set for the occasion to help him grow as a comedian.

“It’s forcing me to exist as someone that’s not myself as a stand-up,” Ballew says. “Pretty much everything I do is based on experiences that I’ve had, so forcing myself to perform and write from a different perspective will be helpful…even if it is the perceptive of a dead artist.”

Aside from dressing as Ross, Ballew intends to take the character into a raunchier and more intense direction during his five- to six-minute set. “I think it’s going to be fun to see. You don’t really think of dick jokes and Bob Ross in the same narrative,” Ballew says.

While the performers take their attire and joke writing seriously, the event is shrouded in the carefree aura of a one-and-done moment in time.

“It doesn’t matter how cheesy or ridiculous the jokes look. Everyone gets it,” Kornely says. “If a performer is going to put that much effort into the costume and writing new material, the jokes are going to work. It’s just so visually ridiculous and funny already.”

Though the material will be irrelevant by the time each performer’s costume is taken off and their character is abandoned forever come Sunday, the experience of writing material for an alternative voice and trying things he or she never would (if not for this specific format) could carry value in a comic’s growth and development.

“You should be challenged. If you keep doing the same thing, then you’re going to get bored with it or you’re just going to limit yourself to thinking comedy can only be at Karma or comedy can only be at the Comedy Café. That’s ridiculous,” Kornely says. “You don’t always have to do stand-up as yourself. It helps to inspire you because you can write a hack joke, but if you’re doing it as The Mummy, it won’t be hack-y because you’re doing it in a different context.” 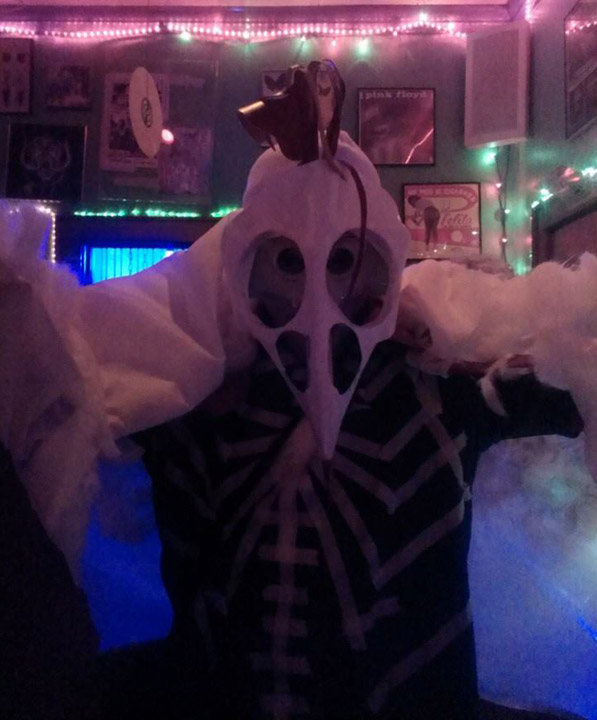