There’s no getting around it: Cudahy is Milwaukee’s punching bag. If you live anywhere in southeastern Wisconsin, you’ve undoubtedly heard dozens of jokes, putdowns, and generalizations cast in the direction of the roughly 20,000 residents in the approximately five square mile community.

On a recent episode of his “Harmontown” podcast, Community creator and Greenfield native Dan Harmon claimed when he lived in the area, people considered Cudahy to be a full of “assholes, failures, and scapegoats.” That doesn’t exactly corroborate the city’s “Generations of Pride” motto. You’ve probably even made a few Cudahy comments yourself. I know I have.

The city is still home to Patrick Cudahy Inc. (a meat packing plant), as well as notable regional manufactures such as Vilter and ATI Ladish, and is just down the road from a Caterpillar plant in nearby South Milwaukee. The small city’s abundance of industry is the reason the town even exists, but it’s also much of the reason its reputation is so muddied. In addition to employing much of the slandered suburb’s citizens, these factories have also bred trickle-down employment in other forms.

In an effort to serve a clientele primarily composed of third-shift workers looking to blow off steam following a hard day’s labor, a cluster of bars on and around Cudahy’s Packard Avenue open their doors as early as 6 a.m. It happens in cities all around Wisconsin, but not at the volume of Cudahy—a city I learned once held the world record for bars on one city block. With hopes of giving such a negatively viewed place a belated fair shake, I decided to live as the Cudahyans do, and get shitfaced at some six o’clock bars on a Monday.

Fuck if I was going to embark on this potentially dangerous journey solo. In the role of Sherpa, I enlisted Milwaukee comic and Cudahy native Adam Loeding to join me in my weekday AM bar crawl quest. Excluding a short tenure living off Brady Street, the comedian was a Cudahy lifer, and proud of it. His surroundings inform his standup, as he—oftentimes in a brown leather jacket, ball cap, and flannel shirt—is known to fire off incredibly crass bits that topple boundaries of good taste, while managing to remain witty, hilarious, and altogether original. If there was a better Cudahy guide, I’d be shocked. At worst, he’d be able to provide reliable testimony at the trial if I was beaten up at one of the bars.

That Monday, I arrived at Loeding’s nice, spacious lower at the stroke of six. It was still dark. Over coffee, I got him up to speed on my plan of action. Hours earlier, I scoured the (not surprisingly limited) websites and Facebook pages of Cudahy watering holes to get opening times. By half past the hour, we were cruising down south Packard, figuring we’d start off at Pony’s—which claimed to offer breakfast and the mysterious-but-appealing special of “50¢” all day long. We’d soon learn Cudahy bars’ hours of operation don’t mean shit. “The one thing about Cudahy…” Adam started, as we drove. “It will always let you down.” 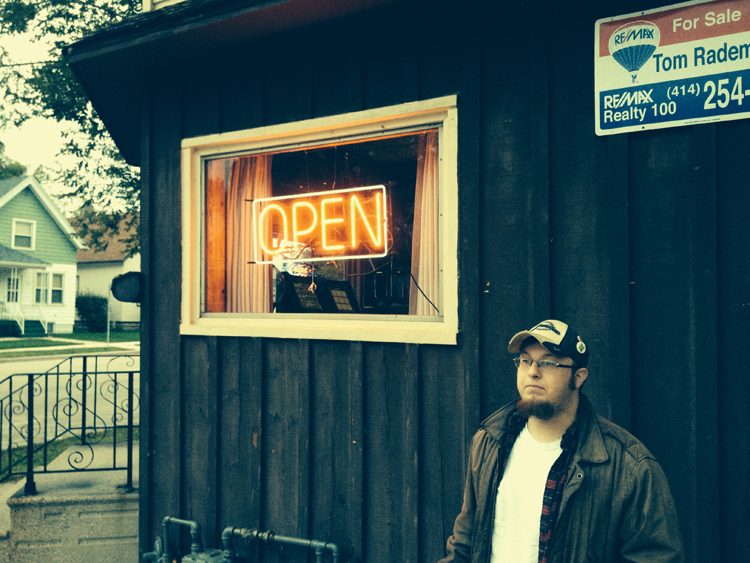 We kept driving until we hit the South Milwaukee border, striking out entirely on Packard. Reluctantly, I circled back to the only establishment we’d seen in town with its “open” sign illuminated: Joe’s Club Bagdad. Between the sketchy name and Adam’s less-than-glowing account of his one previous visit, I was hoping to visit the bar last—with the sobering light of day and some liquid courage to help us follow through—but it was getting close to 7 a.m. Like I assume is the case with the majority of Club Bagdad’s patrons, we couldn’t wait any longer for a drink.

Walking into the impossibly dim dive bar, it was almost as if a record had stopped based on the reaction, except there wasn’t any music playing. Instead, two mysteriously well dressed men and Joe himself looked up at the TV (the only non-window, and non-gambling machine light source), which was showing the morning news. Joe—who was quite nice the whole time—took our drink order, and quickly returned with a mini pitcher of stale Budweiser and a strong vodka Monster. Combined, our first round set us back $5.50. Not bad! Adam went to the ATM, only to find his account had been drained. We were off to a great start!

We talked about comedy and overdraft fees over our drinks as the other three watched the weather and traffic reports with very little interaction. We left the dark, dusty, Chicago Bears-decked bar and moved on to Packard for our next stop, Time Outt. After Bagdad, the bright, clean(er, at least) bar shook us back to life. Local news was on here as well. A middle-aged female bartender was tending to three customers that seemed a mixture of third shifters and dudes who just liked to drink at 8 a.m. 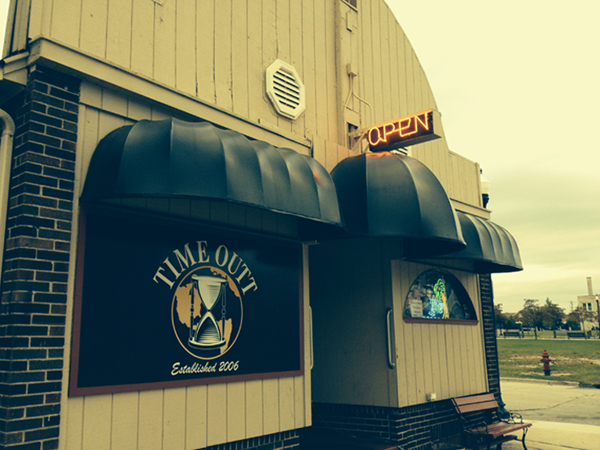 Adam and I took advantage of the daily 7 a.m. to 5 p.m. special—$1 Milwaukee’s Best Ice. After 5 p.m., they run a whopping $1.50. Suckers! I went to the bathroom (where I found a bloody tissue in the toilet), and Adam told the patrons our mission. After I returned, one man who had a bloody scab on his forehead (was it his tissue?!) reiterated the no-longer-held record of most bars on a block, proud of his city. A guy from Club Bagdad walked in and mistakenly joined our bar crawl. I drank another Beast Ice, tipped 100 percent, and asked Adam more about his hometown.

“You go to Cudahy and you drive down Packard to get somewhere else and you see dive bar after dive bar after dive bar. You just kind of infer and let your imagination run,” he told me. “I think a lot of it is over-exaggerated. I think the misconceptions are based in reality to some extent, but it almost adds a certain amount of charm to me.”

Though time was becoming less and less clear by this point, we were told by a fellow AM barfly that a tavern called Brothers—about a four-block walk south on Packard—was open. We made the trek (again, passing a still-closed Pony’s and at least fives others on the way) and entered the small, wood-paneled biker bar. After shaking off the now-expected “Who the fuck are these assholes?” glare of the five grizzled-looking guys on the end of the bar, Adam and I ordered a whiskey sour and a gin and tonic respectively. Two minutes and a combined total of $5 later, we were watching a local morning show on mute. It showed a guy reporting from what appeared to be a fish hatchery. He and I were two men both submerged in unfamiliar waters. The absurdity of this endeavor was starting to set in. 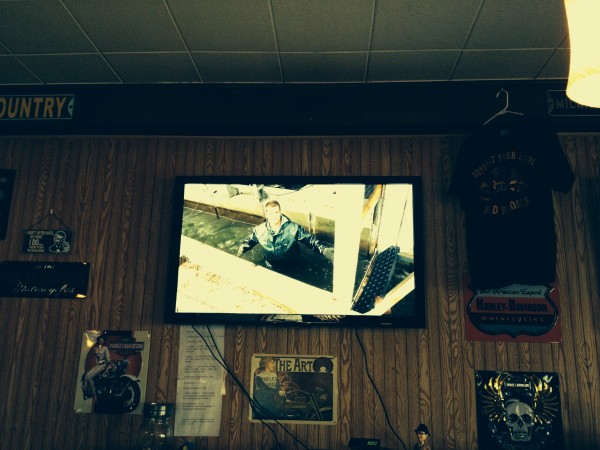 I asked our bubbly (especially for pre-9 a.m.) Brothers bartender Sue if she liked the morning shift. Amazingly, she said she did. That said, she admitted the college students leaving their third-shift seasonal factory jobs to return to school takes a toll on her tips. Altogether, though, she liked having her day’s work over with by the early afternoon. After another round of the same, I was hit with the realization that I hadn’t eaten anything except my lime wedge and watered down domestic barley since about 12 hours prior. I was getting wasted. Fortunately, my noble guide saved the day with a solid recommendation of a restaurant down the street…that also served booze. 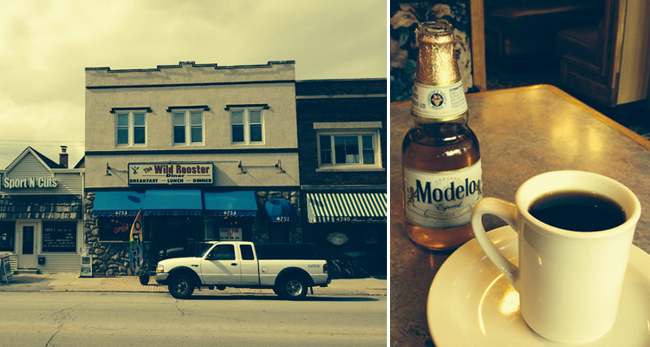 Adam swears by The Wild Rooster, and after eating there, I do too. I sopped up my morning’s work with the astoundingly affordable weekday breakfast special of two eggs, bacon, hashbrowns, and two buttermilk pancakes for a mere $3.99. Beyond dirt cheap breakfast food, the downtown diner also has a respectable arsenal of alcohol, with about eight beers, rail liquor (all the usual suspects), and champagne. All beers were $3.50, so I chased our pancakes with a Modelo, which I perceived to be the most exotic option available. If memory serves, Adam had a Spotted Cow. Fading fast, I cheated a bit and balanced it out with black coffee. An old couple looked at me with a sort of confused pity. I returned the look to the elderly diners spending their waning years in Cudahy.

After breakfast at 10 a.m., we reached a quandary: my earlier preparations proved to be worthless, as many of the supposed 6 a.m. bars weren’t open yet. Not wanting to repeat-visit prior establishments, and with an array of places set to open at 11 a.m., we walked to Adam’s house for a couple of Pabsts while we awaited the opening of our final stop. The Lakeside Pub is within spitting distance of Adam’s house. At 11:20 or so, we stumbled the few steps to the bar and grill, where a woman (whom we’d later find out was the bartender) and another employee smoked on the patio. With very few singles and zero urge to continue drinking left, I asked for the cheapest beer. I got a Leinie’s Oktoberfest, the previous day’s special they were trying to finish off (probably because Leinie’s Oktoberfest makes Beast Ice seem like holy water by comparison) for $2.50. Brimming in beer, I choked down the brown middle-of-the-road Miller-distributed “craft” beer as a few customers filed in. They were on their lunches or just gearing up for the beginning of their days. Conversely, our day was nearing its hazy conclusion. Fucked up and tired, we finished our Cudahy Third-Shift Bar Crawl just before noon (because we’re not alcoholics, all right!).

I had literally walked a mile in the work boots of a Cudahy third shifter (at least the post-grueling factory labor part). In doing that and after getting to know Adam’s relationship with this misunderstood Milwaukee suburb, I learned some things about the city. Yes, Cudahy is just as weird and shitty as everybody perceives it to be…in SOME ways. In other aspects, there are nice people, tasty bargain basement breakfasts, and a small-but-present nightlife scene—that just so happens to take place in a one mile radius in the morning. The next time I pass through the bacon-scented main Cudahy causeway en route to The Metal Grill, or before shame-eating some Taco Bell, I’ll see Packard Avenue’s dive bars and their distinct menagerie of weirdos, day-drunks, unthinkably cheap drinks, video poker machines, and inordinately avid local news viewers in a slightly different light than before. I think Adam sums up Cudahy best.

“It feels like home. It’s just dirty enough for me, and not any worse.” 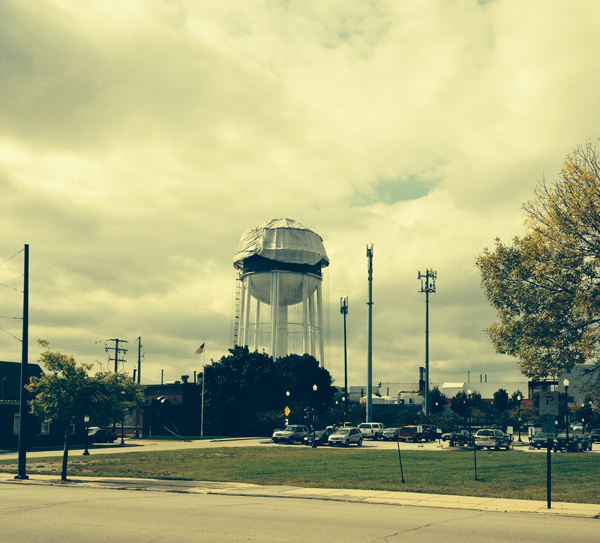