Last time, I traveled all the way to the Mississippi River in search of eagles, kestrels, and other winged-wonders. Today’s entry takes us back to the Mississippi River, detailing a day-long road trip across the state, as I made my way to Des Moines, Iowa for a work trip. It was a mad dash, with very hit-or-miss results that led to an important birding lesson. 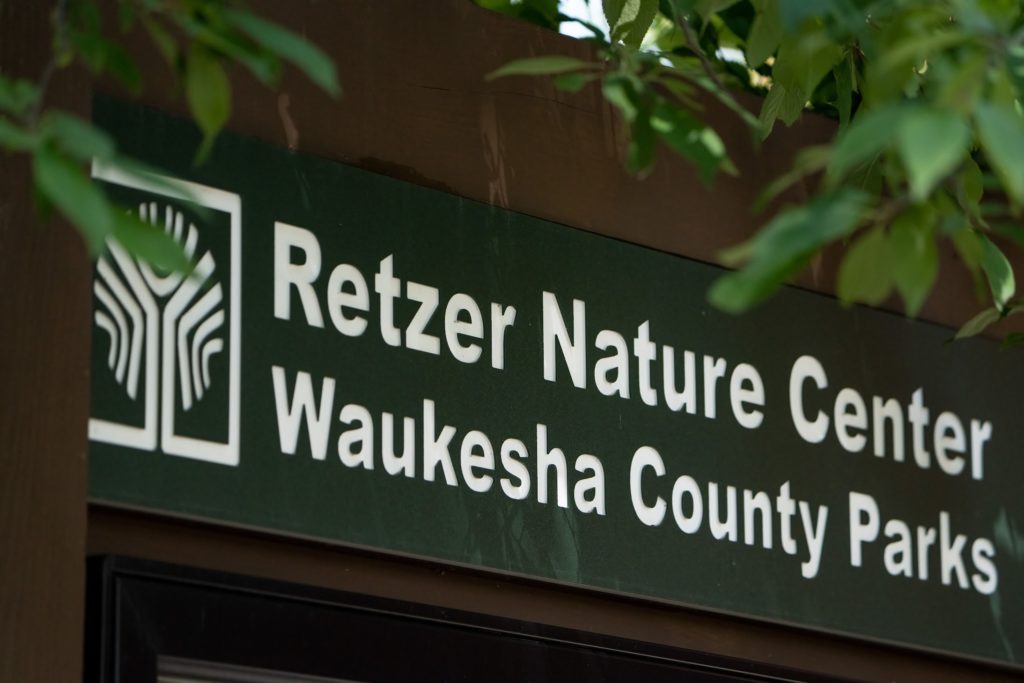 After getting a late start, my journey west started with a trip to Retzer Nature Center in Waukesha. It’s a place I’ve wanted to hit for a while, as it’s an easy 20-minute drive from my home in Cudahy. Starting behind schedule forced me to cut this trip short, but I saw enough to be excited about my return trip this October for the WI Master Naturalist summit. I spent my time on Retzer’s purple trail, which serves as a division between woodland and grassland. I love birding in spaces that hug two or more habitats as it presents an opportunity to see birds of different ecological niches. My short time at Retzer presented Black-capped Chickadees, a Chimney Swift, and Eastern Kingbirds, though I know I missed a few others—including a hawk of some sort that caught my peripheral as it flew away. I highly suggest Retzer to my fellow Milwaukeeans. They’re a community touchstone that provides an ample amount of events and tours throughout the year. 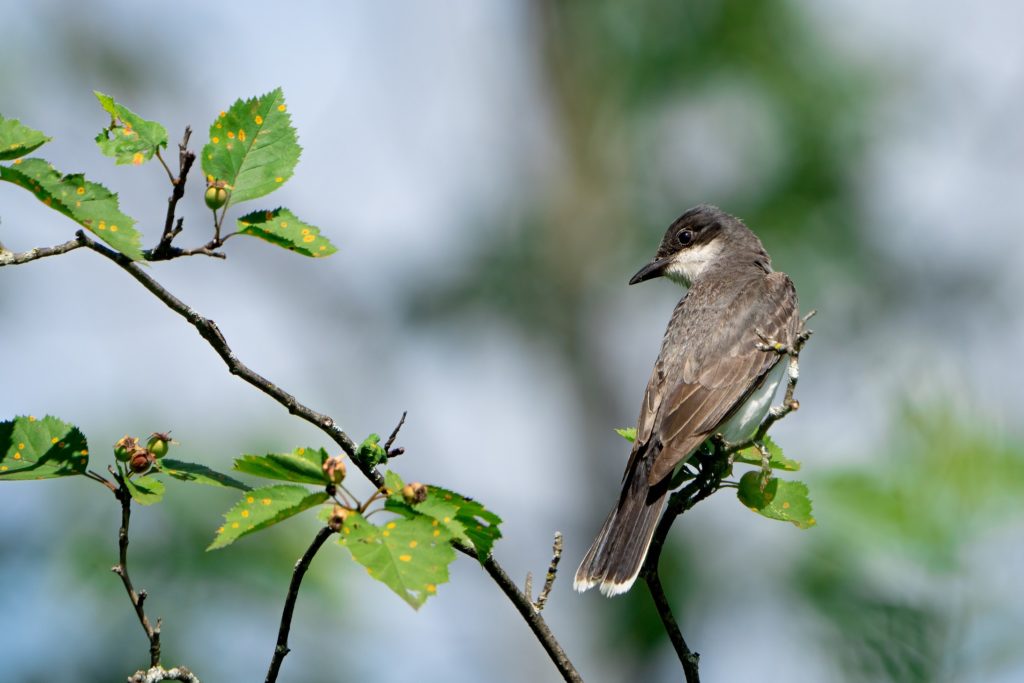 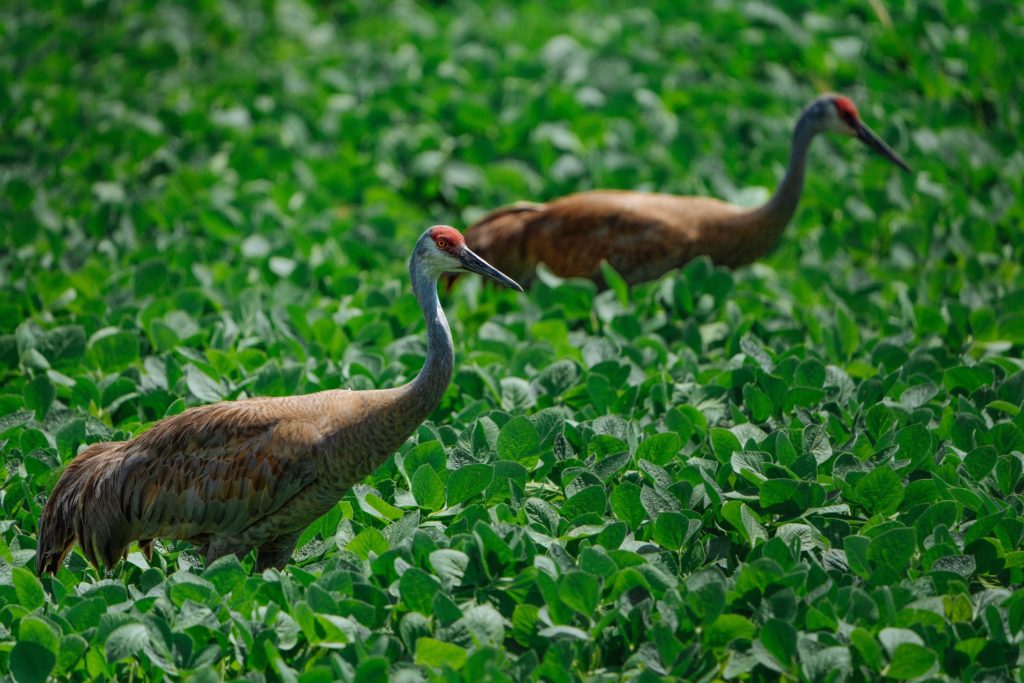 Part of my reason for cutting Retzer short had to do with my second destination. My goal in Jefferson County was to bird in the heart of Lake Mills SWA, a marsh and wet prairie with birds I have yet to encounter this year. Sadly, construction closed down the main portion of Lake Mills, so I spent my time birding on the outskirts of the area instead. The area I chose, a makeshift boat launch in a wetland prairie, had limited mobility and visibility. Red-winged Blackbirds filled the field of reeds, and a pair of Common Yellowthroat warblers filled the air with their wikey-wikey-wikey song. As I made my way out of the area, I was graced with two surprises: a large northern watersnake swimming in the cattails and a Sandhill Crane pair foraging on a field of soybeans. 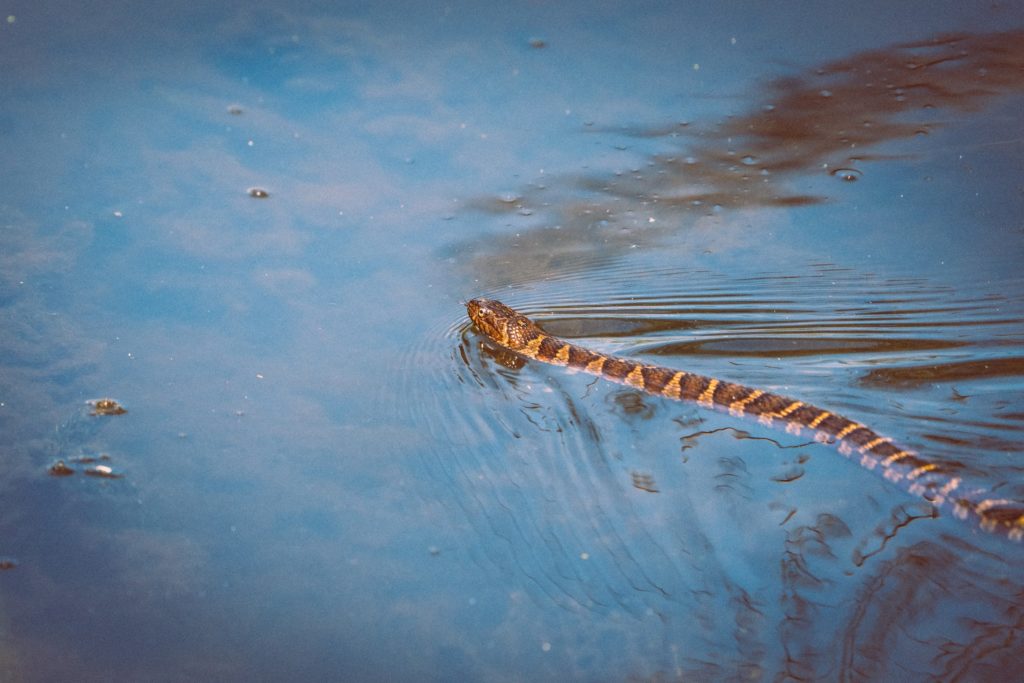 So while I didn’t name Dane County in my initial list of counties, I technically birded here earlier in the year. It was a quick excursion outside Misty Mountain Games in Madison, as I awaited my second opponent for a miniature games tournament, I took part in (shoutout to my Wampa Squadron gaming colleagues). Dane County is home to a plethora of birding spots, so listing a 15-minute experience at a strip mall just didn’t seem in the spirit of this challenge. This trip rectified that. 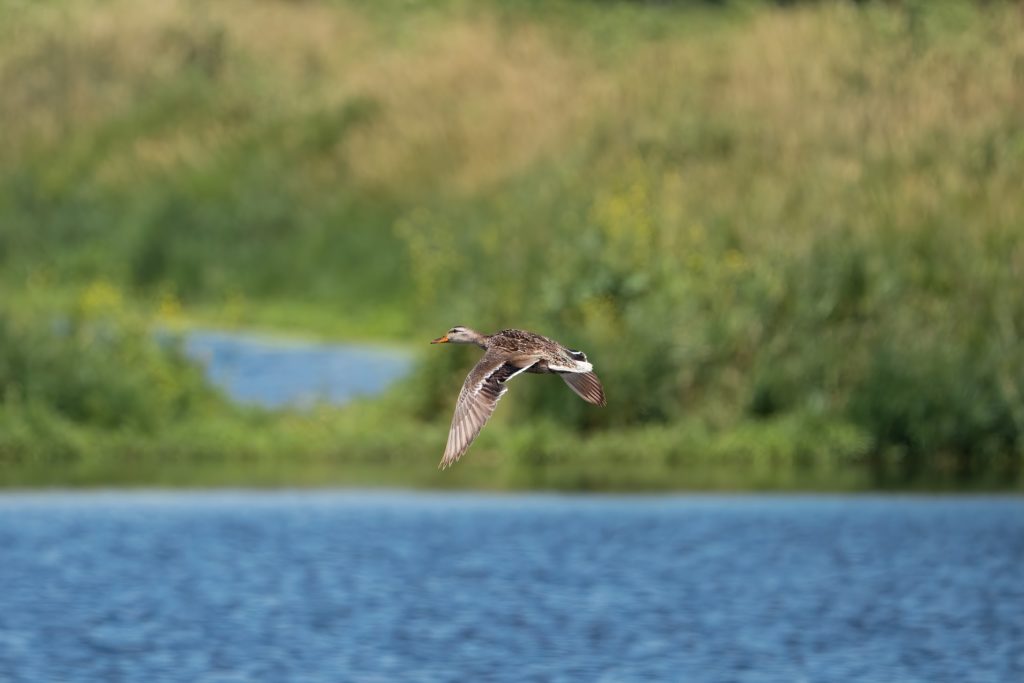 Nine Springs Natural Area is a marsh located 10 minutes outside of Madison. While hitting it midday robbed me of seeing the location in all of its glory, I could tell this spot was going to be special from the minute I got out of the car. A Turkey Vulture hovered above me as I walked down a wooden boardwalk. As I fired away at the sky, one turned to two, turned to a half dozen. Their watchful glide is a reminder that where there’s a predator, there’s prey. Eastern Kingbirds, Swallows, Mallards, and other common marsh species found themselves in my viewfinder during my time there, but a distinctive liquid-y trill really caught my attention. 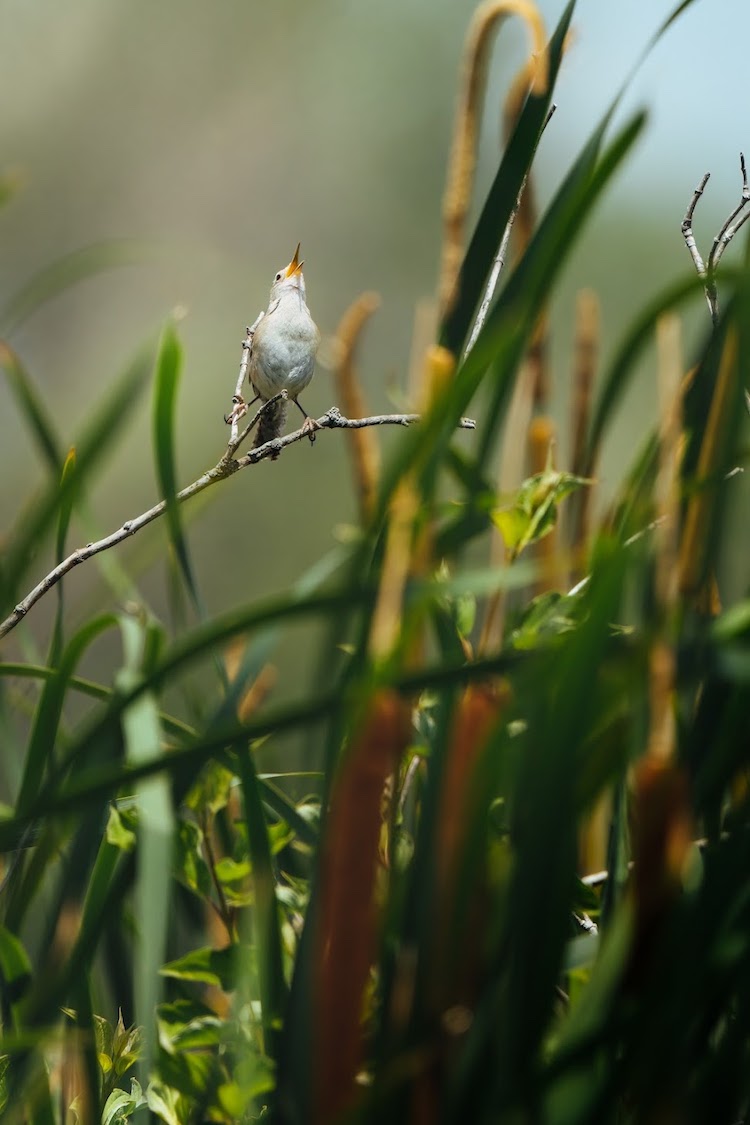 Having spent a ton of time at Wehr Nature Center, I knew the trill was a wren of some sort, but their size is so small I thought it might be impossible to pinpoint the species amongst the thick vegetation. So my wife and I did the best thing you can do—we stood in one spot and waited, and sure enough, we found our songsmith. A tiny Marsh Wren, a lifer (birding term for the first encounter with a specific species), hoped up on a branch and shouted the cries of its people. Minutes later a second wren joined in, tilting its head back high and giving us a pseudo-EDM breakdown. It’s one part cute, two parts hilarious, and made for a memorable encounter. Dane County done right! 10 out of 10—would come back again, especially around dawn and dusk! 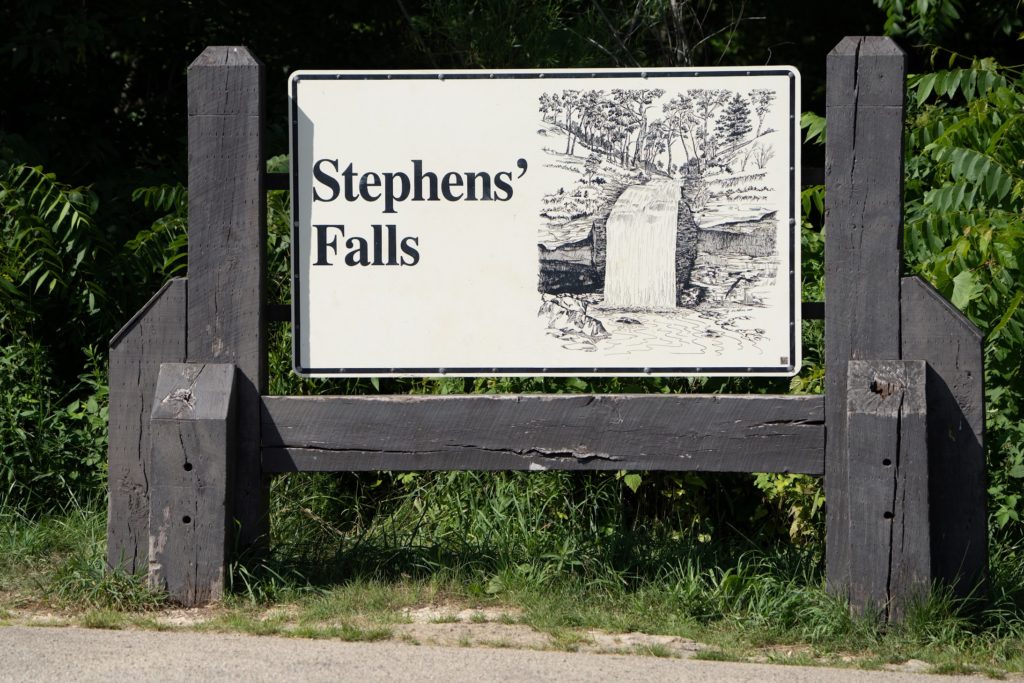 A strange encounter at an A&W (not worth going into here) turned into stranger encounters at Stephen’s Falls in Iowa County. This was my first time at Governor Dodge State Park and I was excited to bird near the picturesque waterfalls. The trail into Stephen’s Falls teemed with birdlife. American Goldfinches, an Eastern Kingbird, Ruby-throated Hummingbirds, and a pair of Indigo Buntings had me excited to go further in. Then humans happened. An on-the-rocks couple shouted profanities as they walked past, each scream followed by the exit of a few birds (and park goers). The remaining birds left after a few families with loud kids walked by. We thought about staying longer, but all of the loud groups were headed toward where we were headed, so instead, we headed out with hopes to make the drive to Iowa a tad shorter. On the way out I caught a group of Orchard Orioles chasing each other around, so not all was lost! 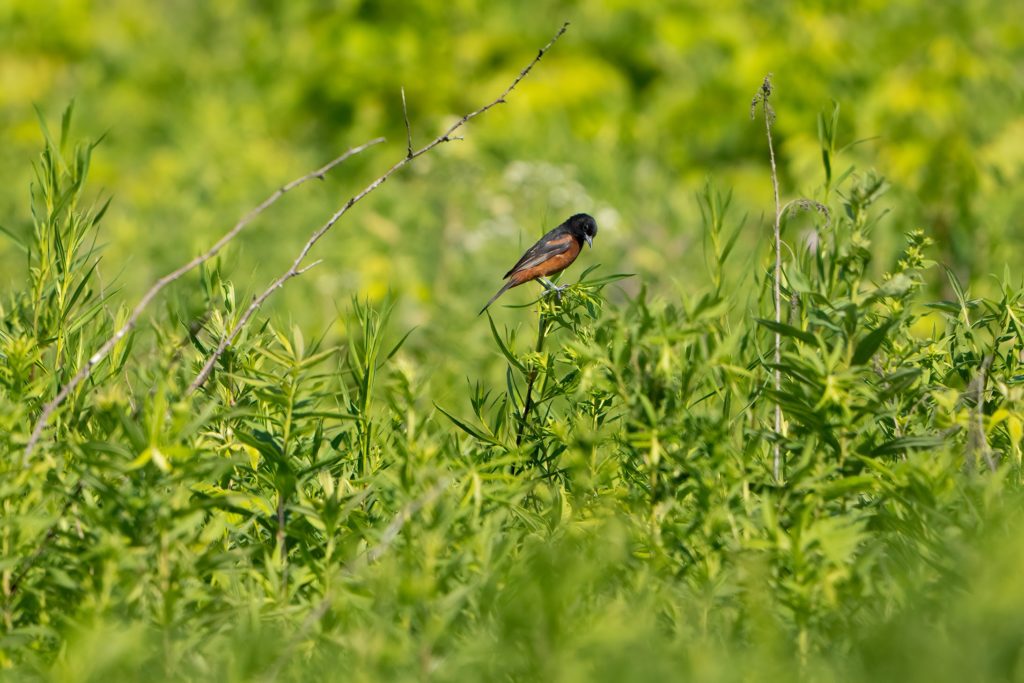 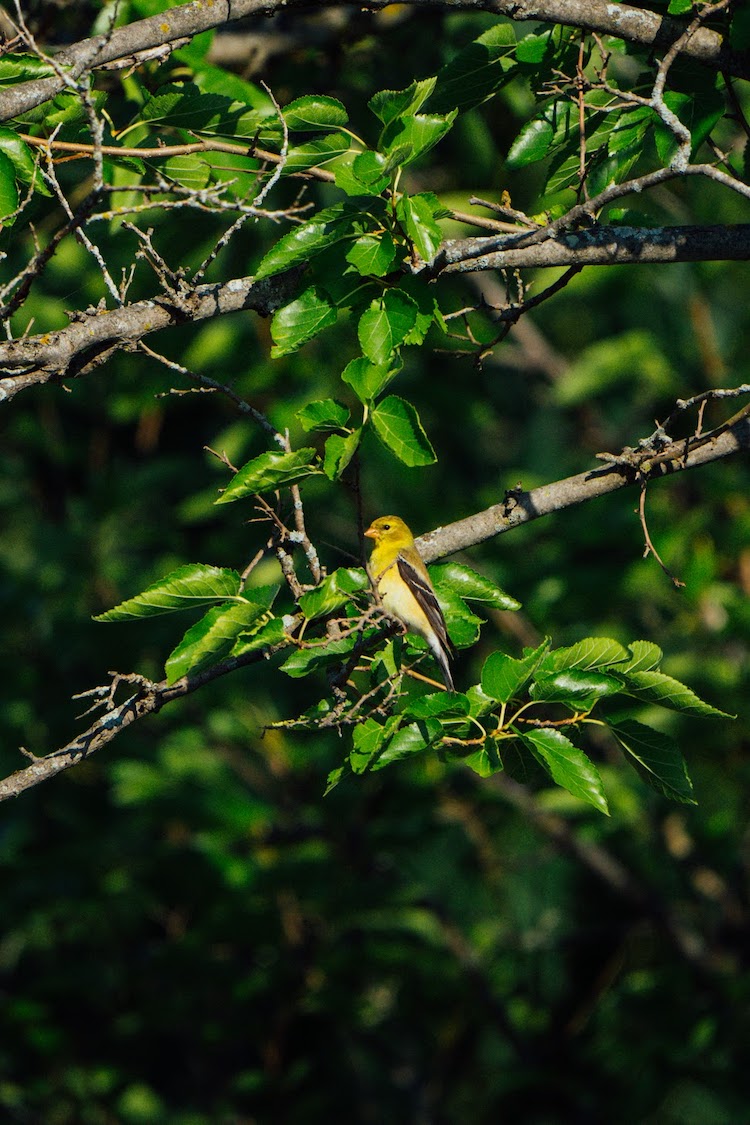 Stranger turned into strangest as the day wore on. Yellowstone Lake SP looks like a great place in Lafayette County to bird…if you plan it out ahead of time. I’ll be honest in saying I didn’t. The winding roads brought us to the middle of nowhere, and it was hard to find a place to park and explore. When we did find a place, cars lingered as they passed us by, making me second-guess if I chose the right area of Yellowstone Lake to explore. Nevertheless, nature has a way of lifting spirits, even if fleeting. The entrance to an oak savanna was host to a young doe that took no mind to us. Conversely, the nearest tree surprised us with a Groundhog, which did its best T-Rex survival tactic by standing absolutely still as I took a hundred photos of it. My first time seeing one in the wild! We didn’t come across a single bird until on our way out. A creepy unison of shrill cries ended up being a Blue Jay call I was unfamiliar with. After passing by, a half dozen exploded from a nearby tree, startling us as we made our way to the car. American Goldfinches and a lone Indigo Bunting completed our bird sightings at Yellowstone Lake SP. 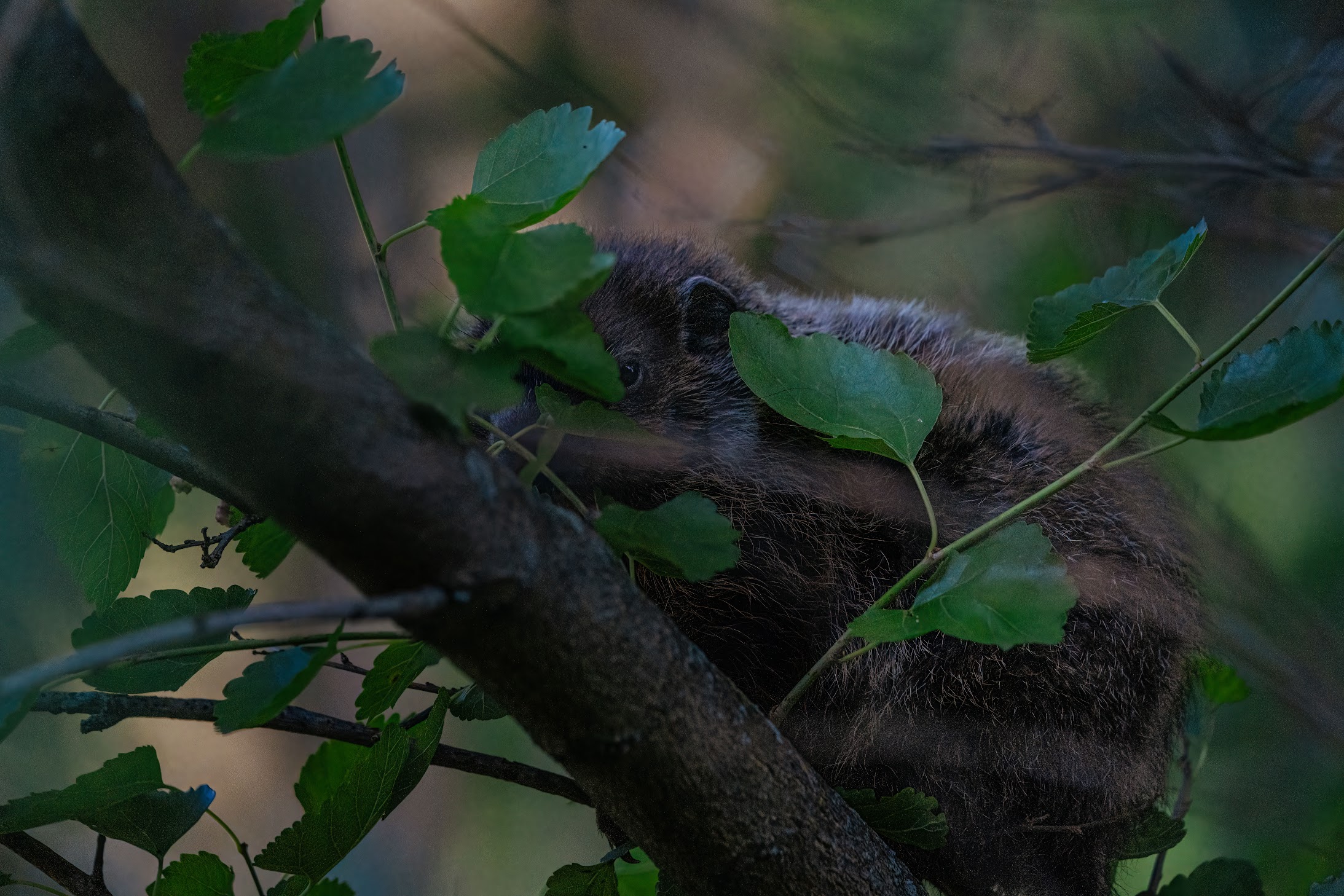 After a few weird encounters, the cross-state trip ended on the banks of the Mississippi River. Eagle Point was marvelous! A pair of Wood Ducks was an initial highlight, though the place was home to (you guessed it) an Eastern Kingbird, at least twenty-five Red-winged Blackbirds, a Northern Cardinal, and a host of other songbirds. A scattering of Great Blue Herons landed nearby, readying themselves for sleep as I braced myself for an evening drive to Des Moines. As a frequent birder at Milwaukee’s Humboldt Park, I will always have a soft spot for the prehistoric Great Blue Heron. It was a gift to end the trip by seeing nine of them. 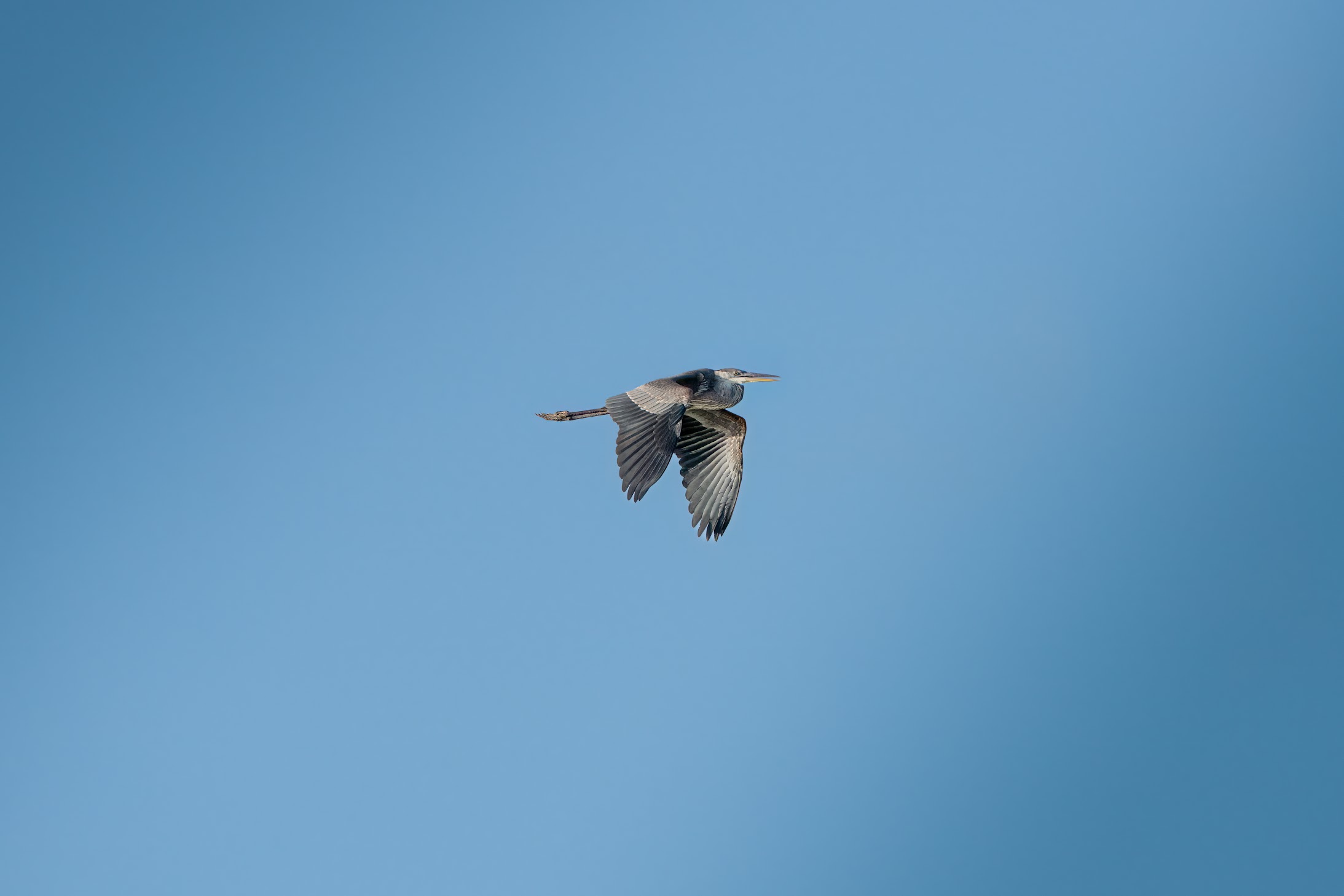 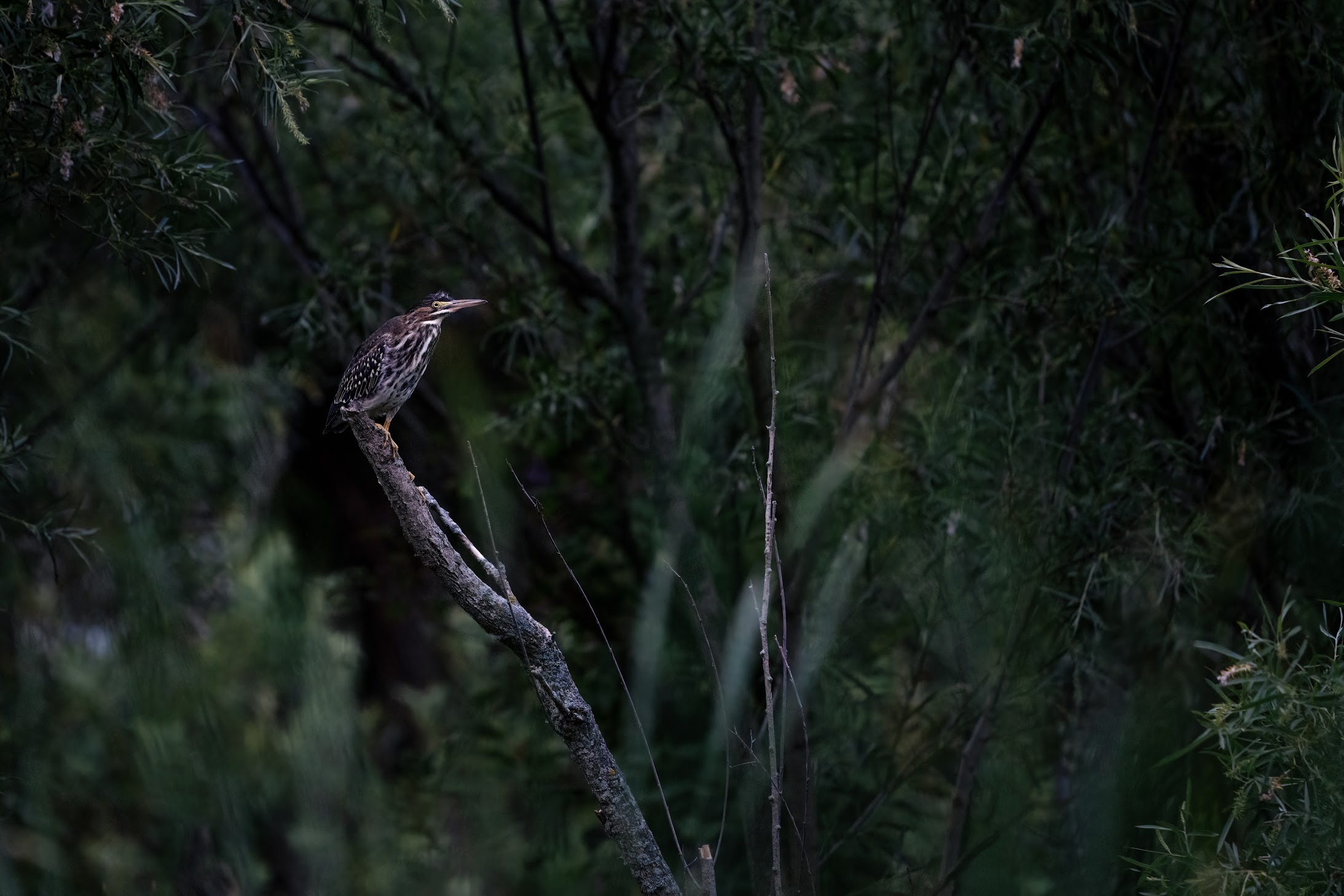 A few mornings later, I dropped a paleontology student off for Carthage College’s annual dino dig. I love birding in the early morning, so I took advantage of the opportunity and decided to check Racine County off my list. There are a few top-notch birding hotspots in Racine. I chose Nicholson Wildlife Refuge because other eBirders reported birds that would be lifers for me. I didn’t see any lifers, but I also think I missed a lot of what is in the area. Loads of bugs brought out loads of birds, and I was able to catch 19 different species during my hour at the refuge, including a Green Heron that played peekaboo with me as I walked down the wooden boardwalk. Part of the reason for missing birds in the area is due to only being in the birding game for two years (I got into birding during the shutdown), but that’s only part of the story. Summer is molting season when birds grow new feathers. During this time they’re more vulnerable to predators so they tend to lie low. Even so, the outing was restful and filled with the songs of American Robins. And my mascot Eastern Kingbird made an appearance too.

Now it feels like I’m getting on a roll! Finally in double digits and I have dates circled for specific counties to hit this summer and fall. I don’t have everything planned out, so if any readers have recommendations I’m all ears!

As for the road trip itself—I’m of two minds about it. On one hand, I know I’ll need to do more of them in order to hit my goal. On the other, it can make birding feel rushed, which isn’t the most scientifically useful (and certainly doesn’t produce the best photo content). It’s also hard to pivot when things like construction come up. If I didn’t try to cram counties in I might have been able to further explore Lake Mills. Still, this is the challenge within the challenge and it means I’m just going to have to be a better researcher.

2022 County Count: 15
eBird Checklists: 84
Chances of hitting my goal: 725 to 1
eBirding Tip: Having trouble learning birds? Try one old school and one new school strategy. Purchasing a physical field guide to take with you is a tried and true method. There are plenty out there, some sorted by bird color, others by type of bird (waterfowl, songbird, etc.), and so on. Purchase the one you think is most useful (I own the American Birding Association’s Field Guide to Birds of Wisconsin, which sorts by bird group—ie: ducks, raptors, wading birds, etc.). Another helpful way is to take photos and upload them online. You can add photos to your eBird checklists and into another citizen science website: iNaturalist. eBird checklist photos are reviewed by local professionals who will email you to correct wrong identifications (I’ve been corrected many times). iNaturalist photos automatically present a probable species to you, then are vetted by a large citizen scientist community. 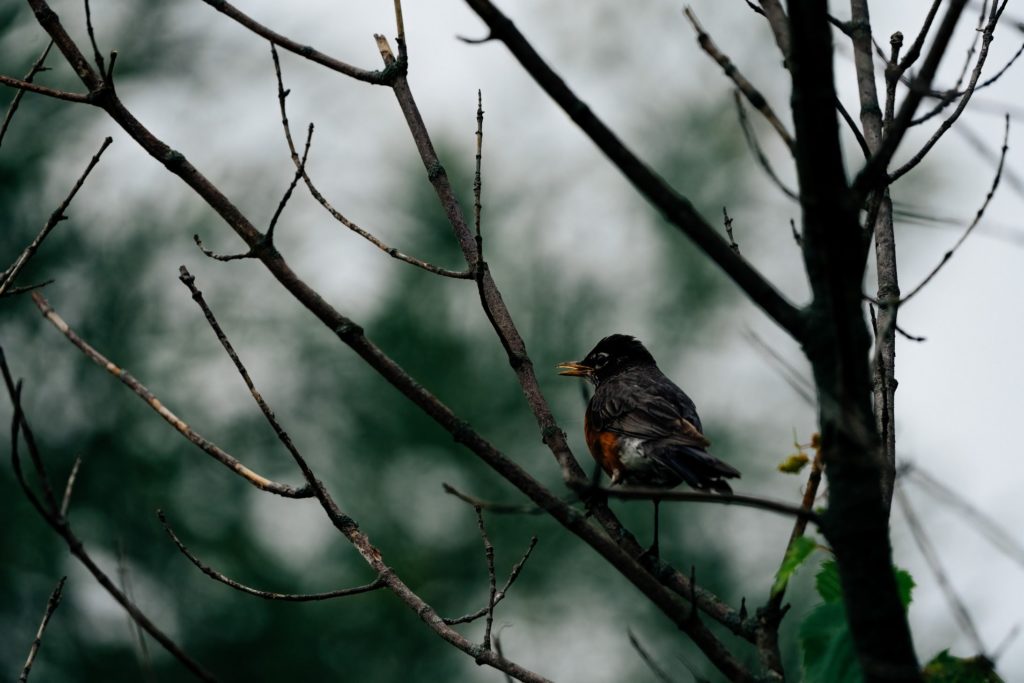