When the Light The Hoan campaign was first announced in 2018, I was skeptical.

It wasn’t the idea itself that gave me pause (efforts to light the Daniel Hoan Memorial Bridge were as numerous as efforts to make it bike-friendly); instead, it was the needlessly convoluted and shamelessly pandering “Show Your Love For Milwaukee!” pitch that accompanied it. This wasn’t just any effort to deck the bridge out in programmable LED lights. No, this was a “unique, grassroots urban infrastructure project” spearheaded by “a local group of business and civic leaders” that sought to “collect and share the everyday stories that help bridge Milwaukeeans together—symbolizing all of the good that takes place in our community.” (You can “purchase” individual bulbs and dedicate them to whomever/whatever you like.) There was talk of “enhancing Milwaukee’s brand.” There was an “official media partner.” There were press releases. So many press releases.

Yes, the Light The Hoan campaign had all the makings of one of those heavily hyped “transformational” marketing projects that always make my skin crawl. The People’s Flag of Milwaukee. The Spot4MKE. That time they were going to wrap Wisconsin Avenue in yarn or whatever. The infamous “Love MKE. Blow Up a Car” thing. Ugh.

And yet I stayed silent. At least the multi-million-dollar project was being privately funded. Sure, there were/are countless more deserving projects, but if a bunch of regular folks and one or two millionaires want to spend their money on a light-up bridge, well, it’s their money. What’s the harm? Still, when a big lighting ceremony was announced for October 2020, I (quietly) rolled my eyes. Was TMJ4 seriously the “official TV news station” of the ceremony? Were they really producing a 30-minute special that would air in prime time? Good grief. When the big night arrived and heavy fog rolled in—more or less spoiling the show—I (quietly) rolled my eyes again.

And then something changed. On the night of Saturday, November 7, hours after the Associated Press (finally) called the 2020 presidential election for Joe Biden, the Hoan Bridge was lit blue in Biden’s honor. I was driving home from my office around dusk, and I decided to swing through the Harbor District for a peek. What I found was genuinely surprising: The parking lot of The Cooperage was full of people taking pictures of the bridge. Further down the street, there was line of cars waiting to get into Harbor View Park. That parking lot was full, too. People were hanging out and celebrating. I (safely) sidled up to a few folks. We laughed. We smiled. We breathed a collective sigh of relief. We talked.

It happened again when the Hoan was lit green and gold to honor the passing of Packers legend Paul Hornung. It happened again when the bridge was used to reveal the colors of the 2020-21 Bucks City Edition uniforms (blue). I stopped by Harbor View Park on both occasions and found the same thing: people taking pictures, people talking. On the night Hornung died, a father and son were huddled close, gazing out at the bridge. I noted their presence and gave them some room.

The Hoan Bridge was constructed between 1970 and 1972, though it didn’t open to traffic until 1977. Since then it’s been a source of misinformation (it was not the “Bridge To Nowhere” seen in the 1980 film The Blues Brothers) and a source of pain. But mostly it has simply been there. A bridge. Maybe a logo, but not much else. A public utility.

I see now that the Light The Hoan campaign has changed that. It has taken something old and given it new life. People are responding to the new/old bridge both online and in chilly parking lots. But it goes beyond that. In all of my conversations in those chilly parking lots, not once did the campaign’s hype and marketing come up. We didn’t talk about “unique, grassroots urban infrastructure projects.” We didn’t talk about “enhancing Milwaukee’s brand.” We didn’t even talk about the bridge. We talked about bigger things. 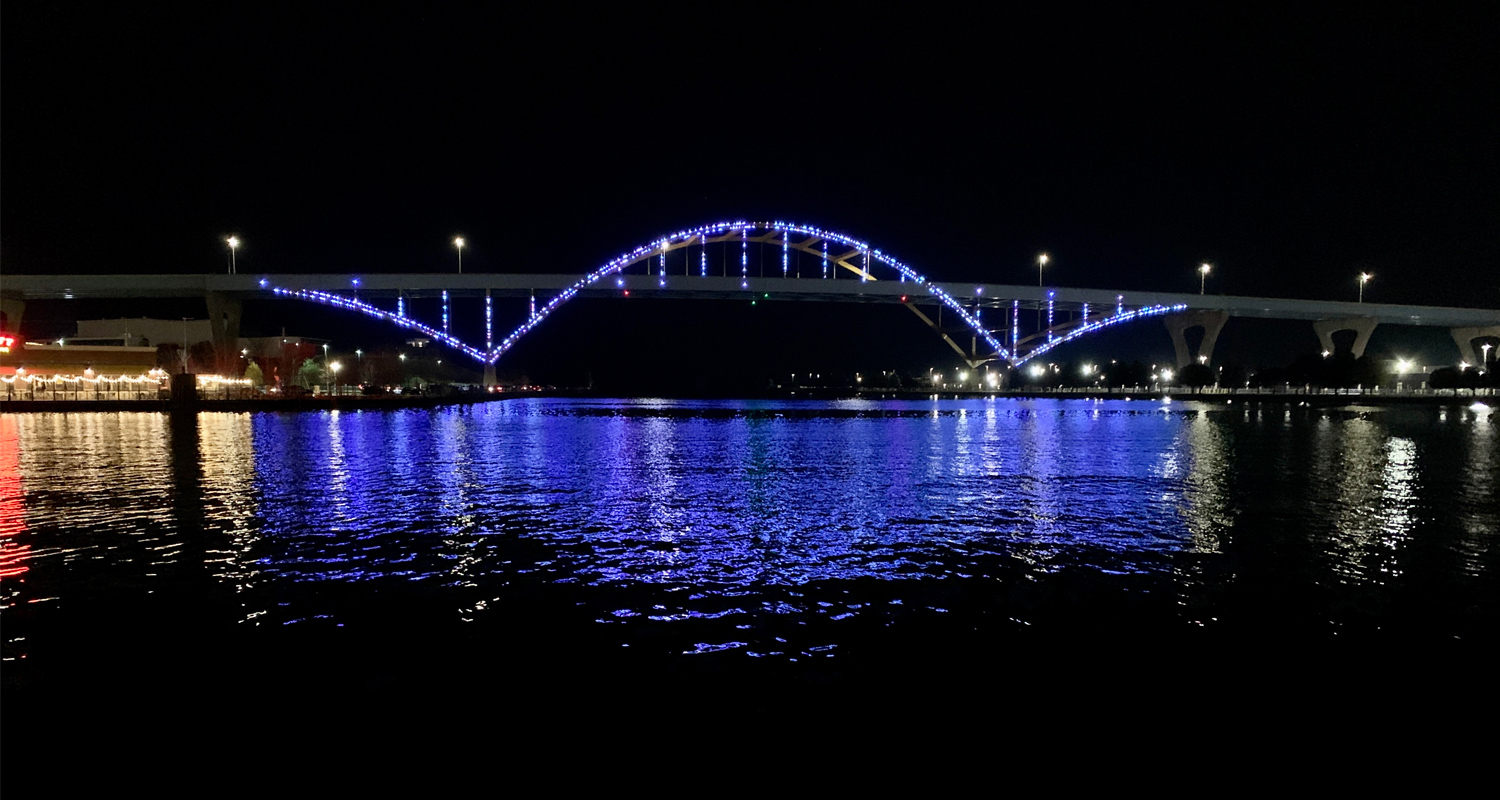