In a city as relatively small as Milwaukee, certain people, places, or things can get saddled with bad reputations. Even if these reputations are somewhat deserved, Milwaukee Record strives to look past the negatives and focus on the positives. In the latest installment of In Defense Of, we make a case for the embattled Mitchell Park Domes.

The bad rap: Perhaps you’ve read a thing or two about the Mitchell Park Domes. If not: In early 2016, all three of the domes in the Mitchell Park Horticultural Conservatory were closed after a chunk of fallen concrete was discovered in the so-called Desert Dome. A long and convoluted saga ensued, one involving multiple campaigns to “Save the Domes,” hotly contested public hearings, controversial op-eds, plenty of political finger-pointing, intimations of scrapping the 50-year-old landmarks altogether, and interminable Domes Task Force meetings. A year later, all three Domes are back online, but their days seem to be numbered.

Why? Well, because they’re gonna cost a bundle to repair. Figures being kicked around come in as low as $14 million for superficial repairs, and as high as $80 million for full refurbishment. “That’s a lot of money for the county,” Milwaukee County Executive Chris Abele said soon after the Domes were closed. “It’s not my money. It’s your money.” He continued:

“And I think it’s important, though, going forward that we give ourself the opportunity—50 years after the creation of these domes—to as a community ask ourselves, ‘is this what we want to do going forward, replicate the domes again?'”

Plus, no one really goes to the Domes any more, right? Hell, they’re barely featured on the city’s tourism site. It’s clearly time to knock one—or all—of the conoidal wonders down and build a “new, more efficient facility.”

The good rap: Truth be told, the Domes don’t really need much of a defense here, because they’ve been getting plenty of love from Milwaukee and beyond in the last year. Let’s start with the National Trust for Historic Preservation. In October 2016, the trust included the Mitchell Park Domes on its list of America’s 11 Most Endangered Historic Places. Then, just last week, the trust deemed the Domes complex a “National Treasure.” “A Milwaukee landmark for generations,” they crowed, “a unique engineering marvel, and a nationally significant example of Midcentury Modern architecture, the Mitchell Park Domes have been a center of community life and an international tourism destination for more than 50 years.”

County officials are considering demolition of one or more Domes, along with other options ranging from partial restoration to full reconstruction of the buildings. The Mitchell Park Horticultural Conservatory Task Force has been charged by the Milwaukee County Board of Supervisors with evaluating long-term options for the Domes’ future.

County leaders and the Task Force owe it to the citizens of Milwaukee County to fully consider all possible rehabilitation options for the Domes, rather than take a drastic and irreversible action. A new engineering report highlights a more cost-effective approach for comprehensive restoration of the Domes.

And then there was this quote from National Trust President and CEO Stephanie Meeks:

“Rather than needlessly sacrifice this unique national treasure, local leaders owe it to the public to continue to explore a solution that preserves the Domes for the benefit and enjoyment of future generations.”

As for “your money,” that new engineering report goes a long way in slashing the previously discussed $80 million price tag. Prepared by engineering firm Wiss, Janney, Elstner Associates, the report builds on previous studies and estimates by GRAEF, but comes in at a relatively modest $18.6 million. Oh, and it’s being billed as a long-term solution. Per Milwaukee Magazine‘s report on the latest Domes Task Force meeting:

When asked about how long the repairs would last, WJE engineer Peter Tarara said, “We see these as long-term repairs.” Bruce Kaskel, a LEED-certified principal of WJE who said his specialty was glass cladding, added, “We have confidence in this type of repair, which we have done with other buildings.”

Kaskel noted that there will always be issues of cracking in any glass installation. But he said he believed recurrent problems with spalling concrete on the building’s framework would cease to be an issue once water leakage is resolved. “Concrete can last forever, or for a very long time,” if not exposed to moisture, Kaskel asserted.

Attendance at the Milwaukee County attraction, meanwhile, has risen by 28 percent in the past five years: 187,658 people checked in in 2011, while 240,179 made the pilgrimage in 2015. According to the Milwaukee Business Journal, “the Domes ranked 14th in attendance among top Milwaukee-area attractions in 2014.”

Still, the Domes will need even more love if they’re going to survive. The best way to show that love? Go to the Domes! From our 2016 piece entitled “Hey Milwaukee: If we want to save the Domes we should probably start going to the Domes”:

I can’t help feeling that the Domes’ uncertain future is a lot like the demise of record stores: everyone bemoans their slow extinction, but when pressed about how often they patronize the fading establishments, everyone is suddenly mum. […]

Back in February, I wrote another piece involving the Domes and my daughter: “Parents: It’s cold and the Domes are closed, so take your kids to the Shops of Grand Avenue.” The “joke” in that piece was that the long-struggling downtown mall was largely empty, and that it was the perfect place to let a kid run wild and go nuts on a chilly afternoon. Let’s make sure the Domes don’t end up being the first part. 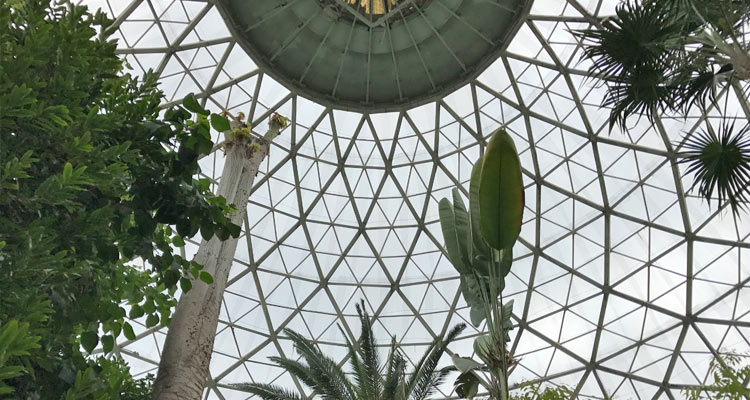