• Last week’s big “new shit” news was undoubtedly the American Family Insurance Amphitheater, coming to the newly christened Summerfest Presented by American Family Insurance. (Note: Everyone will continue to call it Summerfest, of course.) But the second-biggest development has got to be the updates on the forever-ailing Shops of Grand Avenue. Enjoy your mostly empty downtown mall while you can, Milwaukee, ’cause shit’s gonna change.

According to the Milwaukee Business Journal, the mall’s third-floor food court is expected to move to the first floor sometime this year, making room for office space up top. A new plaza at the mall’s entrance on Wisconsin Avenue and Old World Third Street, and a “historic restoration” of the Plankinton Arcade are also in the works. The Grand Ave.’s new ownership group, which took control of the mall back in December 2015, released initial renderings of their plans in April 2016. No word yet on whether the Leonard Bearstein Symphony Orchestra and that barbershop will survive. [Milwaukee Business Journal] 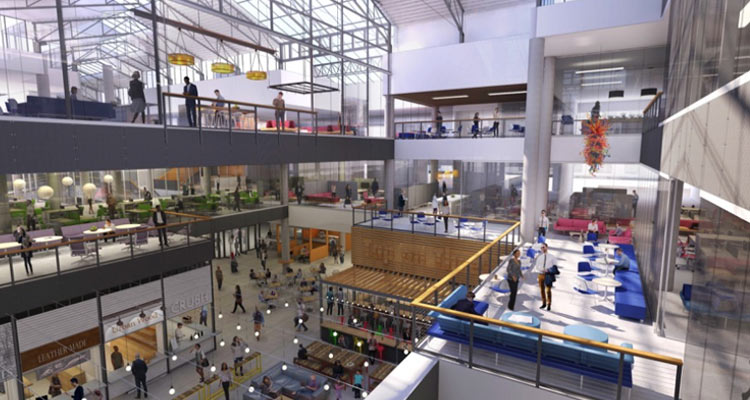 • A hop, skip, and a jump west on Wisconsin Avenue, Marquette University is planning to go nuts with some new shit—$600 million worth of new shit, to be exact. The school recently unveiled big plans for the next eight years that include a $96 million residence hall and a $120 million athletic performance research center. Other new shit includes a “BioDiscovery District,” an “Innovation Alley” (complete with a new business school), and a recreation and wellness facility. [Milwaukee Business Journal]

• Some new shit is subtle. Other new shit, like the proposed 14-story glass tower atop the Humphrey Scottish Rite Masonic Center in downtown Milwaukee that would house a 220-room hotel, is not. [Milwaukee Business Journal]

• And by gum, wouldn’t you know it, Kenosha’s Mars Cheese Castle is getting in on the “new shit” craze, too. A planned expansion with “several interactive and photo-op stations, as well as the addition of fun medieval decorative components” in the works. [OnMilwaukee]