Bookstores, you may have heard, are dying. To be more specific, bookstore chains are dying; in fact, they may already be dead. Barnes & Noble, the nation’s biggest bookstore chain, is currently in its death throes. The Wisconsin-based Book World, once the fourth-largest bookstore chain, shuttered late last year. Books themselves are doing just fine—sales of e-books have leveled off in recent years—but the physical stores that sell them are not. The culprit behind it all? Amazon, of course.

Enter Milwaukee’s Boswell Book Company (2559 N. Downer Ave., 414-332-1181), a shining example of perhaps the final hope for bookstores: the independent, neighborhood bookstore. Feeling cut off from the rest of humanity? Tired of staring at a screen all day, wondering when the end will finally come? Want to buy the latest Christopher Moore novel and a coffee table book on Milwaukee beards? Look no further.

Boswell opened its doors in April 2009, but its history stretches back much further. The Downer Avenue store was originally one of the four remaining locations of the famed Harry W. Schwartz Booksellers, itself a Milwaukee institution for nearly a century. (The titular Schwartz opened his first store, then called Casanova Booksellers, one block away from Boswell’s current location.) The lowest-volume store of the bunch, the Downer Avenue location was reborn as Boswell Book Company just three days after the Schwartz chain closed for good on March 31, 2009. It was named after 18th-century British biographer James Boswell, whose image had long served as the Schwartz logo.

How did Boswell take up residence so quickly? That would be thanks to Daniel Goldin, a New York native who had worked his way through the Schwartz ranks for decades, and who quickly purchased the 8,000-square foot Downer location and made it his own. A 2012 profile on Boswell explains:

No stranger to the book business, Goldin worked for Schwartz Bookseller owners Carol Grossmeyer and Rebecca Schwartz for 23 years in various capacities (including new book buyer, backlist buyer, store manager, and general manager) at almost all of the retail locations. Goldin chose the Downer Avenue space because of the historical connection and because he thought it perfectly suited for an independent bookseller.

Today, Goldin’s Boswell continues to thrive in a harsh brick-and-mortar climate. Yes, the store carries a ton of contemporary and classic fiction along with a quality selection of specialized nonfiction books (history, science, music, urban planning, etc.), but it’s the “neighborhood” part of “neighborhood bookstore” that sets it apart. Walk into Boswell and you’re not only greeted by the latest books-turned-films (André Aciman’s Call Me By Your Name, for instance), but by titles from Milwaukee- and Wisconsin-based authors writing about Milwaukee- and Wisconsin-based things. Books on Wisconsin supper clubs, Milwaukee’s civil rights history, and the city’s ’70s and ’80s punk scene abound. 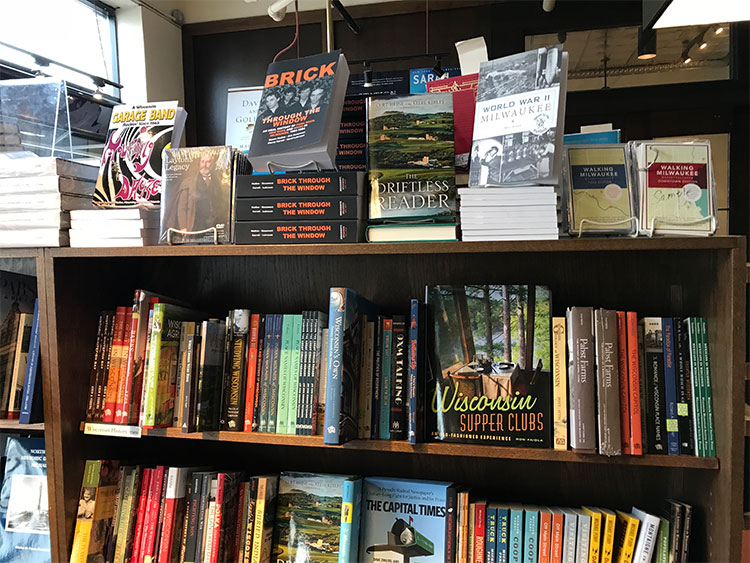 In the nearby “locally bound” section, one can come across books of poetry by former Milwaukee Poet Laureates Susan Firer and Matt Cook, and the delightful Shady Hollow books by former Schwartz booksellers Jocelyn Koehler and Sharon Nagel. Barring a private audience with tireless Milwaukee historian John Gurda, Boswell’s local section is the best place to brush up on the history and flavor of the region.

Staff recommendations are prominently displayed. Here you’ll find curated picks that range from history books to graphic novels to the latest buzz-worthy tomes. It’s like the employee recommendations at a record store (another endangered-but-still-holding-on physical shop), but with less Beta Band and more Lincoln In The Bardo. The intricately decorated recommendation cards are works of art in their own right, and rival the wacky hand-drawn images at American Science & Surplus. 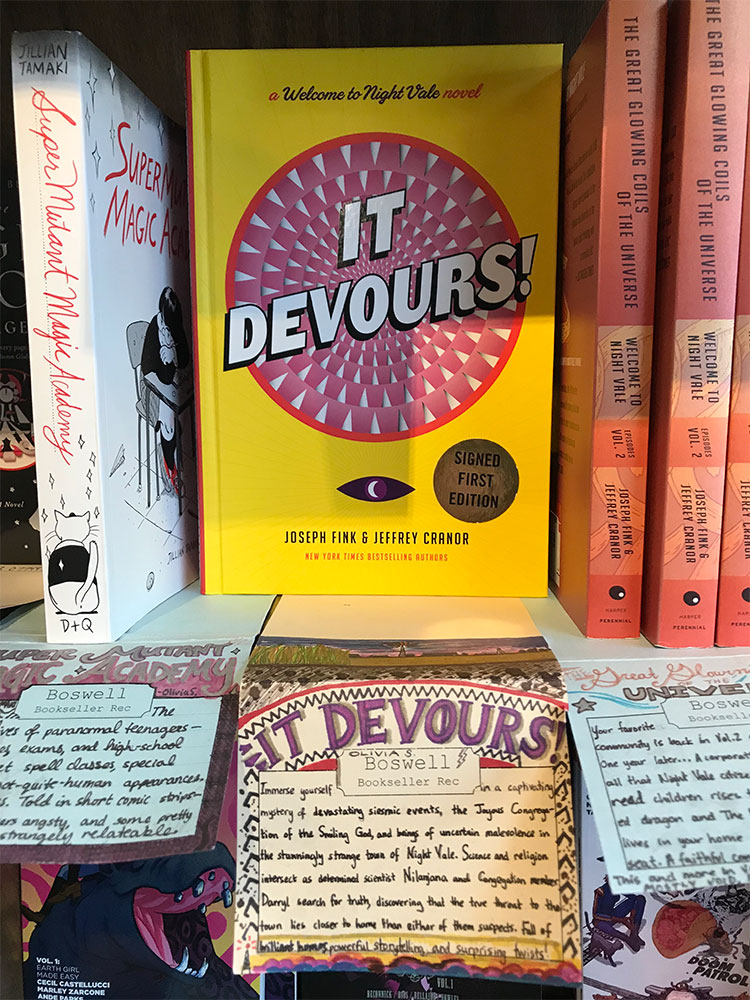 Author readings—held in the cozy back area of the store—are also keys to Boswell’s success. The front entryway is loaded with flyers for upcoming events—both at Boswell and elsewhere. Aciman will make an appearance tonight, while more left-field authors like former reality star Lauren Conrad and comedian Dave Hill have all dropped by in the past. 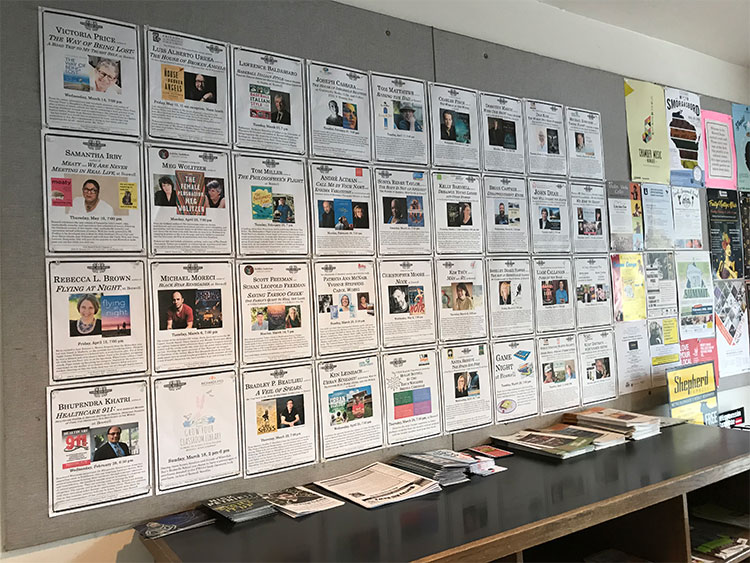 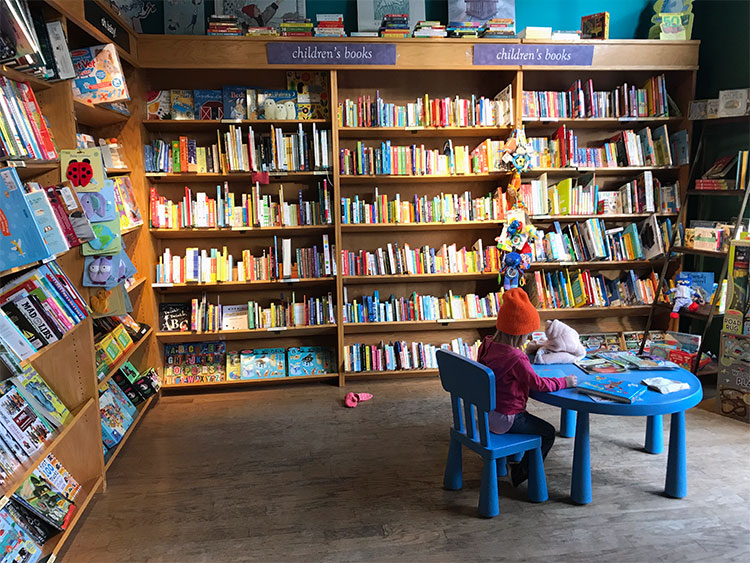 Boswell’s charm and personalized stamp of quality haven’t been lost on the rest of the country, either. Here’s best-selling author Ann Patchett in a 2016 travel piece for The New York Times:

I went on my first book tour in 1992 when I was 28, and I have been going on book tours ever since. I have made it a point to go to bookstores in every town I’ve ever driven through. I go both as a writer and a reader, for business and for pleasure, and I have been in love with too many to make a comprehensive list here. Still, I have to call out some of my favorites, like Boswell Book Company in Milwaukee, lit by the internal fire of one Daniel Goldin, a stupendously great bookseller.

In the end, however, Boswell’s continued success in the era of Amazon is thanks to its dedication to the city and neighborhood it calls home. Here’s Goldin himself, quoted in yet another New York Times piece, from last December:

“The age of the physical chain of bookstores is behind us—unless you don’t need to be profitable,” said Daniel Goldin, the owner of Boswell Book Company in Milwaukee, the sole surviving descendant of a local chain that began in 1927.

“You can never save enough money through centralization to be able to compete with Amazon,” he said. “Instead, you have to go in the other direction—be so rooted in your community you can turn on a dime.” 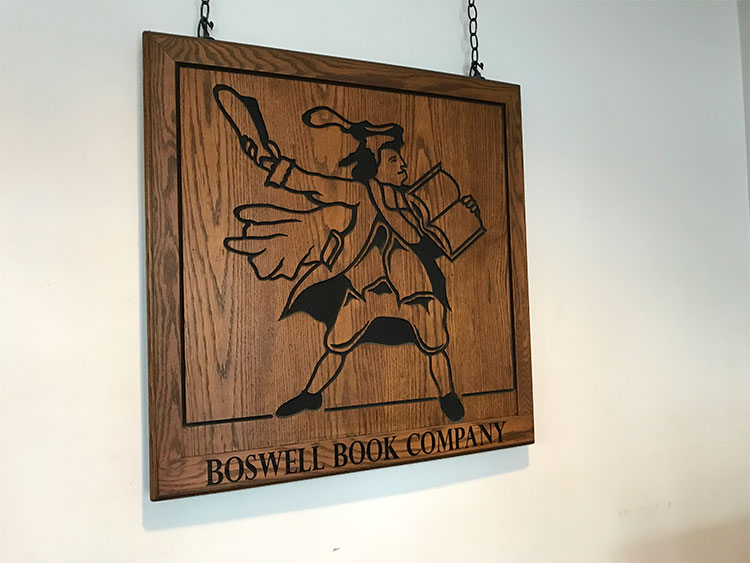