Local art circles threw a French Impressionist-sized fit last week when the Milwaukee Art Museum released the design for its proposed 17,000-square-foot addition. The expansion would give MAM more space and a new lakefront entrance in the form of a two-story building jutting out roughly 200 feet east from the War Memorial. Once neglected lakefront space would finally be utilized, 8,000 additional square feet of exhibit space would be created, and Milwaukee would have yet another architectural wonder perched on the shores of Lake Michigan, joining Discovery World and MAM’s own Calatrava addition.

Too bad everyone hated it. Local writers and commenters panned the dull, box-like design, which seemed to have more in common with an anonymous suburban corporate headquarters (think Initech and/or Initrode from Office Space) than a world-class art museum. Writing for Urban Milwaukee, Tom Bamberger went so far as to say the addition “must not be built.”

What local pundits didn’t hit upon, however, was how similar the MAM addition was to another high-profile expansion that failed to spark the public’s imagination: Microsoft’s Xbox One. Yes, the two projects couldn’t be more different (only one lets you play Titanfall), but the similarities are impossible to ignore. In an effort to further confuse the contentious “Are video games art?” debate, Milwaukee Record rounds up five similarities between the proposed Milwaukee Art Museum addition and the Xbox One.

1. They’re both designed by committees
There’s been a lot of hoopla surrounding the MAM addition’s architect—or, more precisely, its former architect. Jim Shields, the award-winning principle architect for HGA Architects and Engineers, was in charge of the initial design. (Shields also designed Discovery World.) In Shields’ 2012 renderings, the building’s hard rectangle vibe was made more palatable with plenty of lake-facing glass and windows. But the design that was unveiled last week bore little resemblance to that glass-covered proposal, leading to speculation—and later, confirmation—that Shields had left the project due to design conflicts with MAM. Though the 2014 design still retains some of Shields’ ideas, it clearly smacks of design by committee—a committee that, according to the Journal Sentinel, includes MAM officials and exhibition designer David Russick.

Similarly, the Xbox One was at least partially designed by the perpetually outraged committee known as the Internet. The next-gen console’s unveiling at last summer’s E3 conference was the definition of “disaster.” Fans went apocalyptic over baffling and draconian used-games and DRM policies, an “always on” Internet requirement, a mandatory Kinect hook-up, the lack of backwards compatibility, and a steep price point. In response to the outrage, Microsoft bluffed for a bit (“We can’t just flip a switch to turn off DRM!”) before backing down, eliminating some of its planned innovations. The resulting product was a duller, slightly more customer friendly machine, less an Xbox One than an Xbox 360.5. 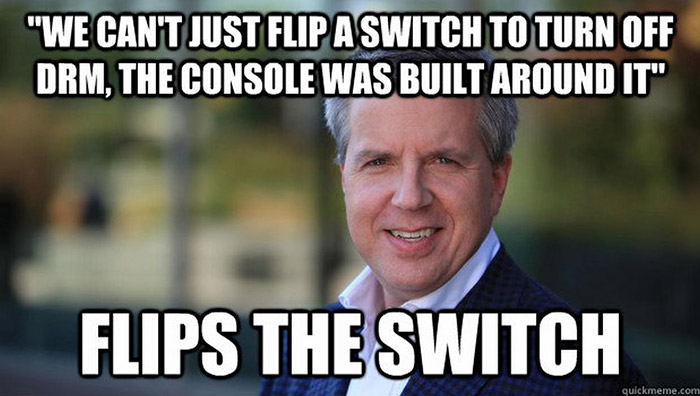 2. They don’t know what they want to be
Is the MAM addition a new architectural destination on Milwaukee’s lakefront, or is it just a utilitarian box meant to house some art? Is it meant to be an attraction in its own right, or is simply meant to blend into its surroundings? Is its all-white color scheme a nod to the Calatrava to the south, or is its hopelessly squat and square-ish design a nod to the War Memorial to the west?

The Xbox One suffers from a similar identity crisis: Is it a next-gen video gaming system for the 21st century, or an all-in-one entertainment unit for your living room? During the rocky E3 rollout, more time was spent showing off the console’s TV capabilities (finally, you can watch TV on your TV!) than its games; the PS4 unveiling, on the other hand, focused almost exclusively on games. The message was clear: PS4 was for gamers, while Xbox One was for people who wanted to watch The Price Is Right, manage their Netflix queue, chat with friends on Facebook Messenger, keep tabs on baseball scores, browse the Internet by using voice commands, and, oh yeah, play some video games.

3. They’re both underpowered
The proposed MAM addition, while not downright awful, is clearly less than stunning, especially when compared to the architecture surrounding it. Museum officials have repeatedly stated that the building was never meant to compete with the extravagant beauty of the Calatrava, though it ends up doing just that thanks to its conspicuously uninspiring design.

Likewise Xbox One’s graphical prowess is slightly inferior to the PS4. Games like Call Of Duty: Ghosts, Battlefield, and Assassin’s Creed 4 all run at a silky smooth 1080p on PS4, but can only muster between 720p and 900p on Xbox One. Hell, those Xbox numbers may even be too good for MAM: If the Calatrava is a PS4, then the MAM addition is a Wii U.

4. Key people left both projects
Shields’ departure from the MAM addition is not unlike the departure of Microsoft’s Don Mattrick, who stepped down as the company’s President of Interactive Entertainment following the disastrous E3 conference. Mattrick is now the CEO of social media gaming giant Zynga (the company that inflicted FarmVille on the world), while Shields is still with HGA.

5. They look exactly the same
Save for the color, the MAM addition and the Xbox One even look the same. Welcome to the future, they seem to say, a future where everything looks like a VCR from 1988: