Between approximately 11:53 a.m. and 2:40 p.m., Milwaukee will see 83 percent sun coverage (peaking around 1:18 p.m.). As you hunt for a last-minute pair of solar glasses, check out some of the ways places in and around Milwaukee will ring in the once in a lifetime occasion. Celebrate the rare astronomical occurrence with viewing parties, eclipse cookies, food and drink specials, an appearance by Planetary Geoscientist Kevin Joestgen, and more.

2. Milwaukee Area Science Advocates @ American Science & Surplus
Beginning at 11:30 a.m., the wonderful American Science & Surplus will put on a MASA-affiliated event that’s to include the use of telescopes and solar glasses, as well as an appearance by Planetary Geoscientist Kevin Joestgen. While you’re there, buy some of those mini rubber hands.

3. Milwaukee Public Library viewing events @ various library branches
Milwaukee Public Library (and other libraries just outside city limits) are going all out for the today’s special event. Most sites will have glasses to distribute and NASA streams of the eclipse inside their facilities. Some branches are having games, stories, and food trucks on hand. Check your local library to see what’s going on there. 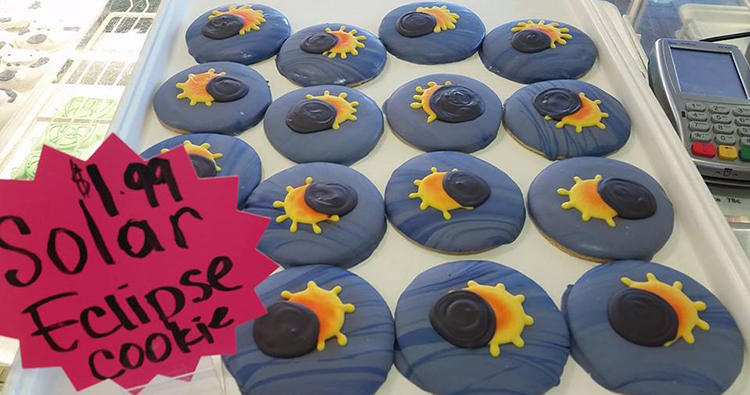 6. Solar Eclipse Party @ Three Cellars (Oak Creek)
Since eclipses are rare and all, it’s only right that people can feel free to enjoy a drink or two without judgement. If you care to watch history in style, Oak Creek’s Three Cellars location has you covered with an inventive special. From noon to 1 p.m., light-colored beers and glasses of white wine will be 50 percent off. Between 1 p.m. and 2 p.m., the savings will shift to dark beers and glasses of red wine. The original special will return at 2 p.m. Oh, and the first 50 patrons will get a free pair of eclipse glasses.

7. Tree School Special Eclipse Edition @ Seven Bridges
Each month, a group called Holistic Moms Network holds a session of “Tree School.” Given the rarity of today’s event, the Milwaukee chapter’s August meeting has been dubbed a “special eclipse edition” of Tree School. Starting at 10:45 a.m., HMN is inviting eclipse enthusiasts to a small viewing party at Picnic Shelter 5A at Seven Bridges in South Milwaukee. Bring your own lunch.

8. The Sun’s Disappearing Act @ Manfred Olson Planetarium
UW-Milwaukee is hosting a proper eclipse party (more on that below), but the school’s Manfred Olson Planetarium will also cap off a run of theatrical performances of The Sun’s Disappearing Act, “exploring the science, history, and culture of solar eclipses,” with a show at 11:15 a.m. Tickets are $5.

9. UWM Solar Eclipse 2017 @ Manfred Olson Planetarium
As noted directly above, UW-Milwaukee’s Manfred Olson Planetarium will be commemorating this rare astronomical experience with a NASA-sponsored soiree. Beyond the aforementioned theater show, UWM Solar Eclipse 2017 will offer short “Eclipse 101” presentations at the Physics Building (1900 East Kenwood Blvd.) throughout the event. The free party (with a $5 suggested donation) runs from 11 a.m. to 3 p.m. and will also include music from The Belle Weather, raffle prizes, food and drinks for purchase from Meat On The Street, lawn games, and a bounce house. More info here.

10. Wehr Nature Center viewing party @ Whitnall Park
If you find yourself near Hales Corners once the eclipse starts, the Wehr Nature has you covered (literally) from noon until the occurrence’s conclusion with glasses for sale or available for sharing.