Despite Milwaukee’s proximity to Chicago and its noticeable contingents of Bears, Browns, and Bills fans that gather to watch games at local bars, the city is undeniably part of Packers Country. The Green Bay-based team is currently the only NFL team based in Wisconsin and you also might recall the Packers actually used to play between two and four “home” games in Milwaukee every season between 1933 and 1994. While Milwaukee’s present day connection to the Packers is without question, there was a five-year span when the city had a different rooting interest in the National Football League.

Way back in 1922, just one season after the previously-independent Packers joined the NFL, a professional football franchise was founded in Milwaukee. The team was started by Joe Plunkett and Ambrose McGuirk, two Chicago sports promoters who wanted to replicate the success of organizations like the Chicago Cardinals, Chicago Bears, and the Green Bay Packers in another Midwestern hub. The Milwaukee Badgers were born.

Among the team’s first major moves was acquiring Fritz Pollard, a future Hall Of Famer who (along with Bobby Marshall) became the first Black player in the NFL when he took the field in 1920. Serving as the player-coach of the Akron Pros in 1920 and 1921, Pollard also broke barriers by being the first Black man in professional sports history to coach white players. With the on-field leadership of Pollard and future Hall Of Fame coach Jimmy Conzelman at the helm, the Badgers won their first home game at Athletic Park—later renamed Borchert Field—in a 20-0 drubbing of the Racine Legion on October 15, 1922. (Yep, Racine also had its own NFL team.) Milwaukee would finish with a 2-4-3 record in its first season. 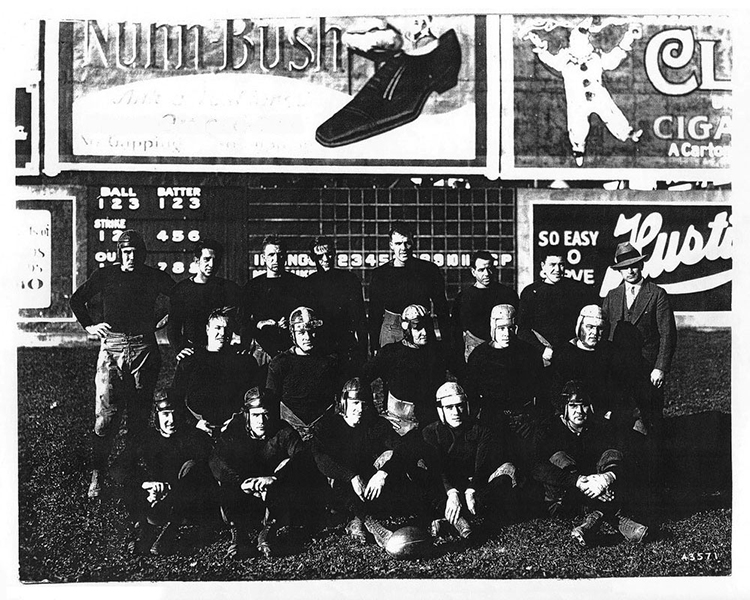 With the exception of the 1923 squad, which went 7-2-3 and finished third, the Milwaukee Badgers struggled for pretty much the entirety of the franchise’s existence. In fives seasons of play, Milwaukee went 16-27-6. The 1925 team actually went winless in six games, eventually cutting their season short when they were unable to field a team. That same season, the mass exodus of players forced the unsuccessful team to resort to some unethical tactics.

During a December 10, 1925 game against the Chicago Cardinals, the Badgers were part of one of the young league’s biggest scandals when they broke league rules by fielding a lineup that included four area high school players, who were playing under fake names. Milwaukee didn’t just lose the game 59-0, they almost killed the NFL and, in the process, also accelerated their own demise. When the league commissioner learned of the underhanded practice in the Cardinals-Badgers game, Milwaukee as fined a then-staggering total of $500, McGuirk was ordered to sell the team, and he was also banned from the NFL for life.

Though the Badgers made a go of it in 1926, the stiff financial penalty, the controversy that shrouded the team, a terrible 2-7 record, and players leaving en masse to join the Pittsburgh Pirates football team caused Milwaukee’s short-lived professional football team to officially disband nine games into the season. There was an attempt to bring the Badgers back to the NFL in 1930, but it never took hold. As noted above, Green Bay started to play a portion of its season in Milwaukee in 1933, thus cementing the city’s allegiance to the Packers that remains to this day.

In addition to employing Pollard and Conzelman during the five-season run, the Badgers also helped break racial barriers by signing two other Black players, Duke Slater and Paul Robeson. Slater was just elected to the Pro Football Hall Of Fame last year, while Robeson went on to become a world-renown musician, actor, and an iconic figure in the Civil Rights Movement when he NFL career was through. And long before he was a Packers great, Johnny “Blood” McNally actually started his Hall Of Fame career as a member of the 1925 Badgers.

While it was brief, largely bad, and shockingly dramatic, the Milwaukee Badgers NFL tenure should not be forgotten. Go Badgers.