Yesterday, the Milwaukee Brewers revealed a slew of local breweries and beers coming to Miller Park’s new “Local Brews” bar in 2017. Lakefront’s Riverwest Stein, Third Space’s Happy Place, and Milwaukee Brewing Co.’s Outboard were just a few of the homegrown selections announced for the homegrown bar. But consider this: If the news had come down, say, 60-odd years ago, it wouldn’t have been news at all. Back then, Milwaukee baseball fans weren’t limited to whatever brews the stadium decided to offer up—they could carry in whatever they wanted, no questions asked. Until they couldn’t, of course.

From the day Milwaukee County Stadium opened in 1953 (the stadium was then known as Milwaukee County Municipal Stadium), fans were free to carry in their own bottles, cans, and cases of beer and/or booze. Not that they necessarily needed the distraction: The hometown Milwaukee Braves (formerly of Boston) brought in 1.8 million fans in 1953, setting a National League attendance record. Four years later, an impressive 2.2 million fans watched the Braves. (For a modern-day comparison, the Milwaukee Brewers drew 2.3 million fans in 2016.) The Braves defeated the New York Yankees in the 1957 World Series, and returned to the Series in 1958, this time losing to the Yankees. Legends like Hank Aaron, Eddie Mathews, and (eventually) Bob Uecker played for the team. Things, in other words, were good. 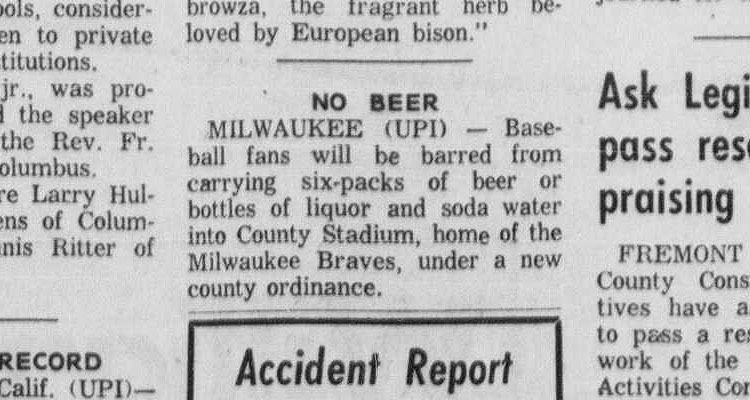 Yes, the days of carry-ins were over. Milwaukee, in a word, was pissed.

Back in Milwaukee, a war was brewing—one that divided a city from its ball club. “The people on the county board, which controlled the stadium, got greedy,” [Eddie] Mathews said. “They decided they could make some money by banning carry-ins and making the fans buy beer from the concession stands and vendors, at a big mark-up, of course.”

The already-apathetic fans—many of whom worked at the local breweries—found the ban insulting. The first indication that the beer carry-in ban had alienated even the most devoted of fans came on the chilly afternoon of April 11, when County Stadium was only two-thirds full for the Opening Day game against the Cardinals. Just 33,227 fans were in attendance to watch Warren Spahn lose a 2-1 heartbreaker in the tenth inning.

According to a modern-day Milwaukee Journal Sentinel blurb, the Milwaukee County Board wasn’t driven by greed, but was simply “reacting to concerns about drunken fans and incidents involving flying beer bottles.” Whatever the reason, fans immediately began to show their displeasure. Attendance at Braves games dropped to 1.1 million in 1961, and a mere 766,921 in 1962.

But was the beer ban really to blame? In a 2012 blog for the Marquette University Law School, author J. Gordon Hylton has his doubts:

Some observers attributed the decline in attendance to a new city ordinance that took effect for the 1961 season which prohibited fans from bringing their own beer into the park. Although a number of contemporary newspaper stories report how unpopular this ordinance was with Braves fans, it is hard to believe that this explains the decline in attendance. Throughout the 1950’s, the Braves had been credited with having the “highest per capita concessions sales in the major leagues,” so it seems unlikely that having to pay for beer at the ballpark would alone cause such a steep drop in attendance.

That steep drop in attendance was enough to give the County Board second thoughts, however. On June 8, 1962, the beer ban was lifted. But, as Povletich notes, “that did little to boost long-term attendance figures.” In 1965, the Braves’ final year in Milwaukee, only 555,584 fans came out to watch the team. County Stadium, meanwhile, wouldn’t see more than 1 million fans again until 1973, when the Brewers brought in 1,092,158.

These days, 17 years after the demolition of County Stadium, Milwaukee baseball attendance is robust. The Brewers have drawn at least 2 million fans to Miller Park every year since 2004, and topped 3 million in 2008, 2009, and 2011. No BYOB needed.