This piece appears with permission as an exclusive from The Milwaukee Anthology, out on April 9 from Belt Publishing. You read more about and order the book HERE.

In the shadow of Miller Park stands another Miller Park, and it is on fire. Whispers of this second Miller Park have been heard for hours. Have you seen it? You’ve gotta see it. It’s over in the Don Money Lot, I think. Upon arrival you find an army of serious, lawn-chair-seated men huddled around the burning stadium. They poke and they prod and they stoke the flames. Crowds gather and gawp. Someone asks if they can take a picture.

“Fifteen bucks,” smirks one of the lawn-chair-seated men.

Nearby, people scream as a beer bong explodes. Someone topples into a giant Jenga game to the strains of “Whoomp! (There It Is).” Beanbags are tossed into the sky—so many beanbags. The lawn-chair-seated men grunt and turn their attention back to the grill. Amidst all the mayhem, a child tugs at her father’s sleeve. “Daddy, can I get a picture with the giant sausages?”

Someone pukes. It is Opening Day. 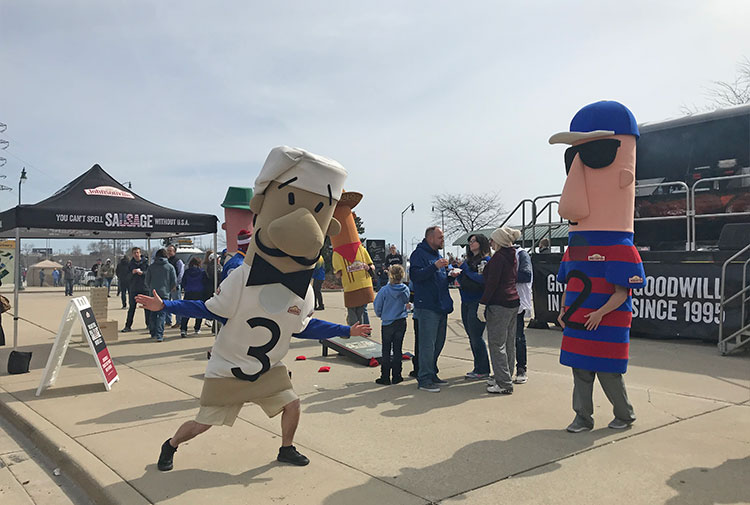 To focus solely on the drunken shenanigans of Opening Day at Miller Park is to miss the point. Yes, there are many drunken shenanigans to focus on: binge drinking, binge eating, ill-advised twerking, overflowing Porta-Potties, still with the beer pong. But in order to truly appreciate this annual springtime spectacle, in order to truly understand its unique flavor and vibe on this Monday afternoon in early April 2018, one must zoom out and marvel at the sheer enormity of it all. The word “tailgating” calls to mind a party. Tailgating at Miller Park on Opening Day is a bender.

The price for that pernicious party is pavement. The stadium’s parking lot covers more than 3.2 million square feet of not-quite-downtown Milwaukee land and boasts more than 12,000 parking stalls. It is divvied into sixteen sections, many of them named after former players and personnel. There’s the front-and-center Henry Aaron Lot, the nearby Rollie Fingers Lot, the far-flung Robin Yount and Paul Molitor Lots. There’s the distant Bob Uecker Lot, which, like the obstructed-view, in-stadium section named after the legendary Brewers broadcaster, is proudly dumpy and self-deprecating. “I must be in the front row!” Uecker crowed in a series of 1980s Miller Lite ads. A walk from the Uecker Lot to the main gate takes innings.

Indeed, traversing the whole of Miller Park’s parking lot can feel like a six-month trip through Middle Earth. Bridges, woods, ravaged wastelands, and even a river (the Menomonee) mark its landscape. Various kingdoms and despotic outposts can be spotted and explored. Various tribes and colonies can be joined and made war with. It’s a bewildering continent of buses, bar shuttles, pickup trucks, party tents, rock and country music radio trailers, news crews, grills, coolers, lawn chairs, makeshift bars, makeshift sound systems, and those ladderball games where you tie two golf balls to a piece of rope. To gaze out at the parking lot from the upper levels of the stadium itself—when you finally get there—is to gaze out at hundreds of flag-marked encampments separated by seas of asphalt. Fellow travelers move through those seas like wraiths, 1982 replica jerseys on their backs and bottles of Leinenkugel’s Summer Shandy in their fists. Smoke fills the air. 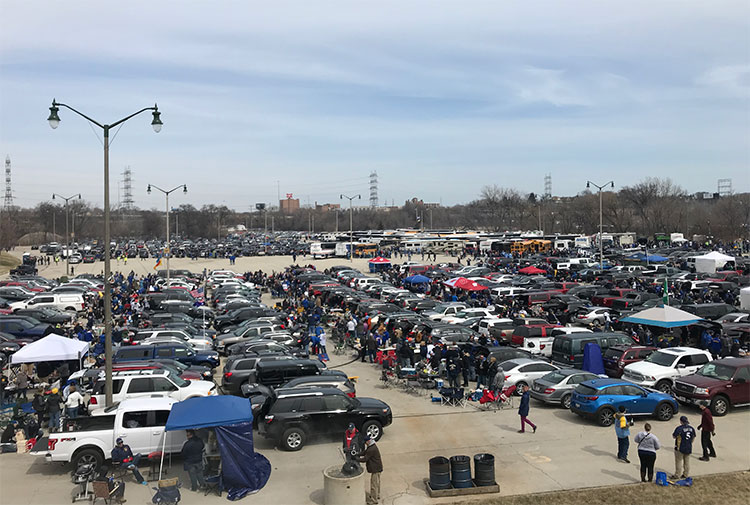 “Any day above ground is a good one. Thank you for your service.”

The mood in the Jim Gantner Lot is belligerent at best—a co-ed fistfight has only recently cooled down—but even the most wasted reveler pays respects to the military vets making their way to the nearby Sausage Haus. People pause, nod solemnly, and cough. If there’s one thing that can stop a party cold, it’s national pride.

There’s another strain of pride at work here: tailgating pride. The Gantner Lot is the park’s smallest—a mere 49,950 square feet and 139 stalls—but its ambitions are enough to fill the Yount and Molitor Lots ten times over. It’s absolutely loaded with people, and its shish-kebab-choked rows and aisles have formed a crude sharing economy; no man, woman, or fan still wearing a J. J. Hardy jersey is wanting for ketchup, mustard, or a Pretzilla soft pretzel bun. “This is the place to be!” screams a woman over the din of 69 Boyz’s “Tootsee Roll.” She takes a bite of a burger and cackles wildly.

Over in the Cecil Cooper Lot, news crews have descended on those who have descended on a massive Johnsonville trailer and its complimentary wares. Free stuff is everywhere on Opening Day, whether it’s branded T-shirts, branded can koozies, or branded food. The news crew interviews a delighted brat-eater as he stands in a massive line that snakes its way around the trailer and halfway down the main concourse. “What do you think of Johnsonville replacing Klement’s as the official sausage of the Milwaukee Brewers?” asks a reporter. “Whatever!” says the man.

The ostensible reason for this entire ruckus is a three-hour baseball game featuring Your Milwaukee Brewers, but the colonists who have claimed the tucked-away “Stormin'” Gorman Thomas Lot ensure that there are plenty of other distractions. Classic parking lot games are joined by rowdy karaoke face-offs (Toby Keith’s ever-execrable “Red Solo Cup”), tedious rounds of Rock Band and Cards Against Humanity (the former complete with drums), and oodles of unnecessary drinking games. A homemade Brewers arcade game stands in the middle of it all, its cabinet decorated with copyright-infringing logos and its screen bordered with baseball cards of old players (Aaron, Yount, Geoff Jenkins, Rob Deer). A man fiddles with it. It’s out of order. 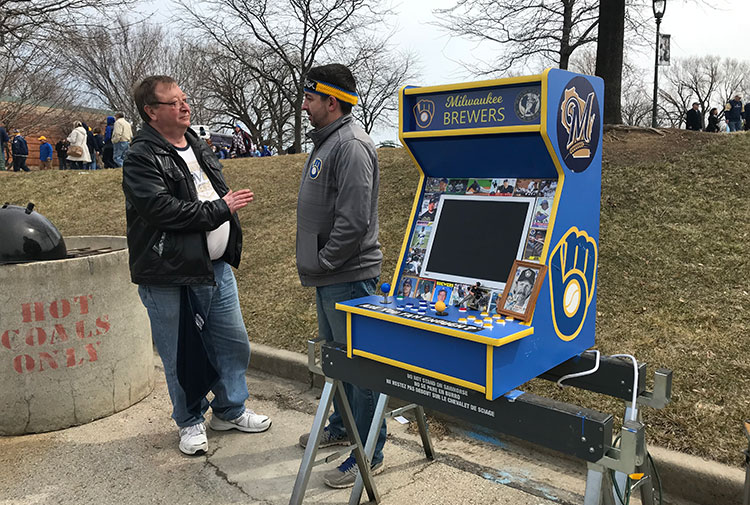 Meanwhile, over in the wild-and-wooly Uecker Lot, another man walks past a clutch of relish-stained pavilions and sits down on the wooded shore of the Menomonee. He peers out at the chilly waters as if contemplating a new world—or maybe an old one. Behind him, a parking lot filled with thousands of his closest friends and party pals; in front of him, the looming visage of Miller Park. The first pitch of the game is imminent. The man studies the topography between him and the stadium: hills, valleys, that saxophone dude who seems to be at every game and who only seems to play “The Pink Panther Theme.” Somewhere—everywhere—a plaintive “WOOOOO!” echoes through the air. Also, “The Pink Panther Theme.” The man gets up and starts to walk. 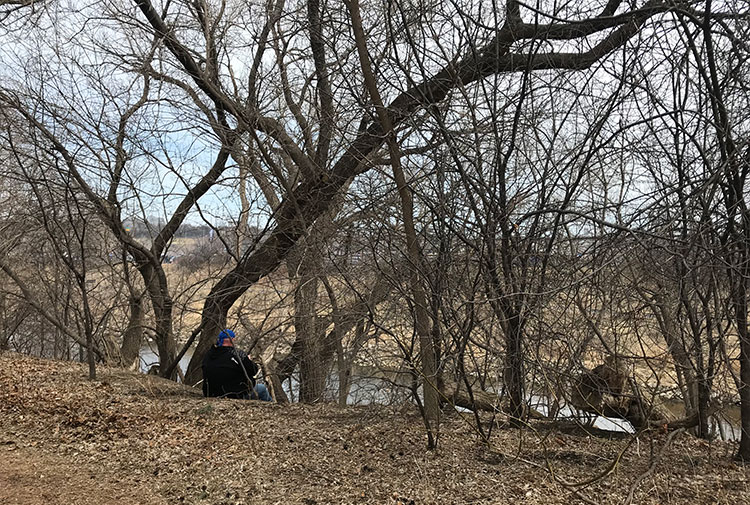 In the shadow of Miller Park stands another baseball park, Helfaer Field. It’s a small-ish field that hosts Little League games and charity events, private parties and kickball tournaments. Helfaer is sold as a real-life “Field of Dreams” and can be rented for two hours at a time. It is built on the site of Miller Park’s predecessor, Milwaukee County Stadium. County Stadium hosted its final major league baseball game on September 28, 2000.

After that game, Bob Uecker took to the pitcher’s mound and gave a speech. “It is a very sad time for me,” Uecker said as the stadium lights were turned off. “For I have been here as a fan, as a player, and for the last thirty years, as a broadcaster. But tonight is the final curtain. It’s time to say goodbye. We will never forget you. For what was, will always be. So long, old friend. And goodnight, everybody.” County Stadium was demolished five months later.

Like County Stadium itself, ghosts of Opening Days past still hang around the site. Memories of the year your buddy passed out on a lawn chair and never made it inside. Wisps of the time Mom tipped the Porta- Potty and couldn’t stop laughing. Half-remembered afternoons filled with pressurized beer bongs and Jell-O shots and eating and drinking and grilling and dancing and screaming. This is where the Brewers once played, and now don’t. This is where everything was once so right, and where everything started to go wrong. This is the same lot we parked in last year.

Someone puked. It was Opening Day.