The Green Bay Packers and Chicago Bears have one of the longest and most iconic rivalries in all of professional sports. Over the years, the match-up has yielded no shortage of memorable occurrences. Just looking back a few seasons, the rivalry has seen Antonio Freeman landing on a Bears defender to cushion a diving touchdown reception, B.J. Raji doing a Hawaiian-themed TD dance after intercepting a pass to seal the NFC Championship, Aaron Rodgers having his collarbone demolished, and Rodgers coming back to throw a division-winning touchdown strike to Randall Cobb on fourth down.

If you look back far enough and are flexible on what qualifies as a “game moment,” you might faintly remember a Monday night meeting betwixt the foes at Soldier Fielder on September 11, 1995. That fateful night, in front of a stadium full of people and a national audience watching on network television, one man jumped into our deep, deep subconscious and landed squarely in the role of a legend. Or, more accurately, a guy with a mullet just caught an extra point for reasons unknown.

Mike Pantazis’ reckless leaping catch of a stadium-tunnel-bound Kevin Butler PAT during that eventual Bears loss is considered to be one of the best catches ever made…by Mike Pantazis. His leap found him risking injury (both to himself and to anyone below) for an inflated piece of oblong pigskin and winding up in America’s heart—for a few days. The former high school football player was featured on local news and Letterman, and won a 1995 ESPY Award for “Outrageous Play Of The Year.” Then, as is known to happen, the world moved on. Correction: most of the world moved on. Hell, even during Lynn Swann’s in-game interview of the north side Chicagoland resident just moments after his impromptu snag occurred, the Hall Of Fame wideout was quick to wrap up the time-killing segment with a hasty, “Okay, let’s go back to the game.”

However, some extensive scouring (a.k.a. searching various combinations of the words “Packers, Bears, jump, kick, ’90s” and the like on Google) unearthed a 2011 mini-documentary about this unintended recipient of a kick during an untimed down. The six-minute short, Off Into Space, features a revealing interview with Pantazis’ biggest fan: himself.

Off Into Space (2011): a mini-documentary from silentRebel on Vimeo.

Instead of suggesting this dude was probably the inspiration for the character of Uncle Rico in Napoleon Dynamite, stating the obvious fact that the portions used in the doc were selected to intentionally expose Pantazis’ delusions, or admitting we’ve seen that he’s posted eight links to “the catch”-related photographs and videos on his Facebook page between January and April of this year (including the video of his Letterman appearance three times in February alone), we’ll let quotes from “The End Zone Hero” himself, culled from Off Into Space (one of those eight Facebook links he readily shared, by the way), let you know how this footnote to a footnote’s footnote in the Bears-Packers rivalry felt about his place in the rivalry in 2011, then 16 years after the fact.

“I just thought it was a regular catch and it turned into stardom.”

Yeah, for a little bit. Then The Drew Carey Show premiered two days later, Lisa Loeb put out her debut album soon after, stuffed crust pizza was invented, and people forgot about a fan catching a football.

“One day you’re not a celebrity. The next day you are. Instant fame.”

“They’re comparing it to the immaculate reception.”

Miraculous play that was singularly responsible for the Steelers reaching a Super Bowl as time expired = civilian with ponytail making an unnecessary catch of a dead ball in a week two game.

“I’m out to help people. And I think that’s why God’s blessed me to become famous and make catches like this and walk away.”

“It took a lot of guts to do it. To make a catch like that and walk away is unbelievable.”

“A lot of people ask me why I didn’t make the NFL because I really was good. But different things happened as I got older. I didn’t have the right opportunities.”

Same here. If it wasn’t for the thousands of better-suited NFL-caliber athletes on earth, there would be more opportunities awarded to the “really good” players out there.

“I think I’m better than half these players out there. And a lot of ’em, like I said, they’re not even in my league.”

This is also untrue.

“I’d probably play linebacker or DB for the Chicago Bears or any team that would take me. I still think I could do it. I think I could start.”

And what team wouldn’t take a guy who caught an extra point football during Bill Clinton’s first presidential term?

“I can do acting, no problem. I’ve thought about it, you know. If I get the right opportunity or the right script or something I want to do.”

Oh! The stuff about being famous and having what it takes to play professional football at age 44 was acting, then? That was really convincing! It was almost like he felt any of that shit was remotely in the realm of possibility.

“I’m a great person. I try to take care of everybody—help everybody in the world. I’d give my left arm if I had to.”

That’s a noble sentiment, especially because losing an arm would hurt his chances of playing in the NFL. Bonus points for calling himself a great person.

“Anything’s possible. Sky’s the limit, and I’ve shown that by making this catch.”

In truth, Mike Pentazis’ catch was actually pretty cool at the time. The fact that a handful of fans (both Packer Backers and Bears faithful) can unearth that obscure event after an extra point proves it’s not utterly meaningless. That said, 19 years later, it’s virtually meaningless, and this continuation of the real-life Al Bundy tale with the sitcom character’s four touchdowns for Polk High replaced with catching a Kevin Butler kick and being one of David Letterman’s stupid human tricks on a slow night isn’t a good look for him any more. Now almost 48, he’s exactly a year removed from being quoted in an article about another extroverted Chicago fan, saying, “He needs to definitely be humble and make sure he does his interviews,” then later adding, “He’ll be well-known, but probably not as much as me because the catch I made was unbelievable.”

Those who think an entire column directed at things Pantazis said is cruel need to realize that he’s famous. Just ask him. He knew what he was signing up for when he showed the world he had the guts to catch that football almost 20 years ago. 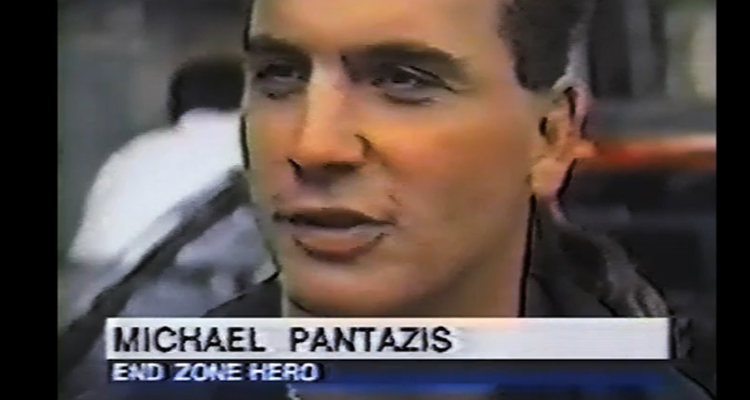