In a time when ignorance is celebrated and grown adults camp out in parking lots for free chicken sandwiches, a public figure like Neil deGrasse Tyson is not only welcome, but needed. The celebrated astrophysicist has followed in the populist footsteps of Carl Sagan by bringing science, reason, and—most importantly—a sense of wonder about our universe and our place in it back into mainstream American discourse. His recent reboot of Sagan’s Cosmos series (available now on Netflix streaming) was a breathe of fresh factual air, and his meme-friendly persona has made him a hero to an entire generation weaned on the Internet. Neil deGrasse Tyson: We’re truly dealing with a badass over here.

In advance of Dr. Tyson’s two upcoming shows at the Riverside Theater Wednesday, December 10, and Thursday, December 11, the topics of those shows have been disclosed. The December 10 show, entitled “This Just in: Latest Discoveries in the Universe,” will feature a discussion of current, curious, and hopefully not discouraging discoveries in our universe. The December 11 show, entitled “Science as a Way of Knowing,” will dig into the nuts and bolts of science itself, as well as the social, cultural, and political forces currently helping or hindering scientific progress. Don’t expect many Chick-fil-A sandwiches at that one. 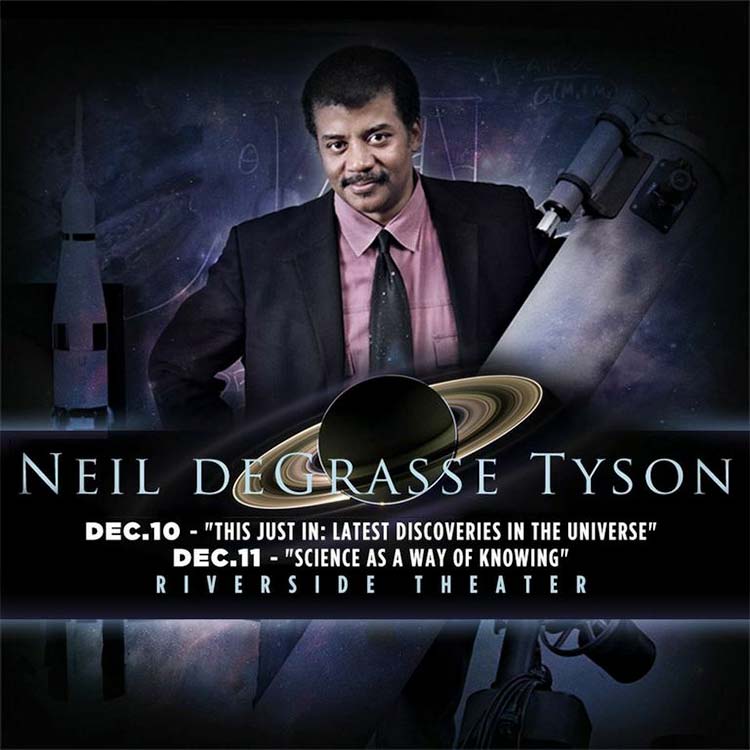